It's hard to make a dollar in the oil business when the average price you're getting is $28 a barrel.

After posting its first quarterly loss in 14 years last quarter, Chevron (CVX 1.60%) wasn't able to turn things around this quarter to get much better results. The company's per-share loss of $0.39 per share was a reflection of how brutal the oil and gas market has been. When a company has the size and scale that Chevron does, though, it can take a few quarters to turn the ship around. So let's take a look at some of the things that the energy giant is doing behind the headline numbers that might indicate that its results will start to improve in the coming quarters.

The two big pain points for Chevron this quarter were commodity prices and weaker refining margins. Beyond that, the company wasn't able to offset those issues with  upticks in production or refinery throughput. In the first quarter, the average realized price for a barrel of oil was only $28, compared to $44 per barrel in Q1 2015. Even with drastic cuts to the company's cost structure, it's close to impossible for Chevron to make a profit at that price point.

When you add the decline in refining margins to the low price issue, it's clear why the company has been struggling. Here's a quick breakdown of Chevron's earnings by business segment. A key point of note in these numbers is that U.S. upstream earnings increased significantly from the fourth quarter. That's because Chevron realized a $955 million asset impairment at the time that was absent in the recently reported quarter. 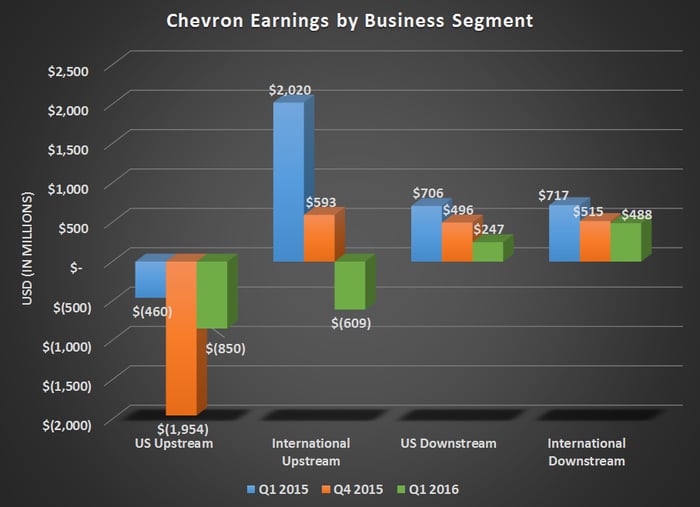 From a cash flow perspective, things don't look much better. The company has reduced capital and exploratory spending by 19% compared to last year as some major capital projects have come online, but cash flow from operations has dried up even faster. Not only did Chevron need to take out another $3.8 billion in debt, but it also had to reach into its cash pile to pay the rest of its expenses for the quarter. 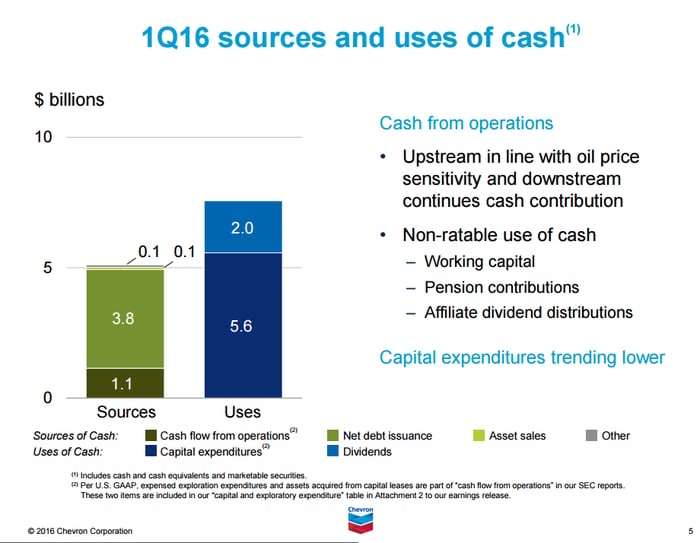 What happened with Chevron this quarter

What management had to say
There isn't much that a CEO in the oil and gas industry can say right now that will give a lot of confidence to investors, but John Watson did his best by mentioning the things the company can control, like capital spending and bringing operational costs down:

We are controlling our spend and getting key projects under construction online, which will boost revenues. We announced first LNG production and first cargo shipment from Train 1 at the Gorgon Project in March. Production from the Angola LNG plant is imminent and a cargo shipment is expected in May. Earlier in the year, we started up production at the Chuandongbei Project in China, and we continue to ramp up production in the Permian Basin and elsewhere.

Looking forward
Chevron has said on multiple occasions that it is doing everything that it can to preserve its financial standing while paying out a dividend to investors. It expects that, by 2017, it will be able to cover all capital expenses and dividends with operational cash flow, and Brent crude oil at $52 a barrel. That's a pretty ambitious goal considering that a year ago, it was expecting to be cash flow breakeven at $70 a barrel. Management believes it can achieve this by reducing capital and exploratory spending by about $15 billion from 2015 levels. The one trade-off to consider, though, is that the company won't be spending much to plant the seeds for future growth.

For the long term, though, these are the right moves to make now. Chevron has been outspending its cash-generating ability for some time, and low oil prices could continue to do it some financial harm. It will likely be awhile before we see a decent recovery in commodity prices, so Chevron needs to be ready to handle a cheap oil environment for a bit longer.