Please ensure Javascript is enabled for purposes of website accessibility
Log In Help Join The Motley Fool
Free Article Join Over 1 Million Premium Members And Get More In-Depth Stock Guidance and Research
By Matthew DiLallo - May 6, 2016 at 9:45AM

The global infrastructure company is cheap, meaning investors would be leaving a lot of money on the table if they sold right now.

Over the past three years, units of Brookfield Infrastructure Partners (BIP -1.25%) have vastly underperformed the market. In fact, aside from some volatility, units haven't done much while the market has proceeded to march higher: 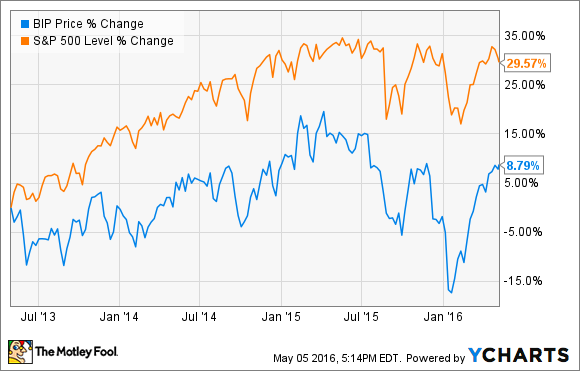 Even when factoring in the company's generous distributions, Brookfield Infrastructure Partners has underperformed the market by a wide margin: 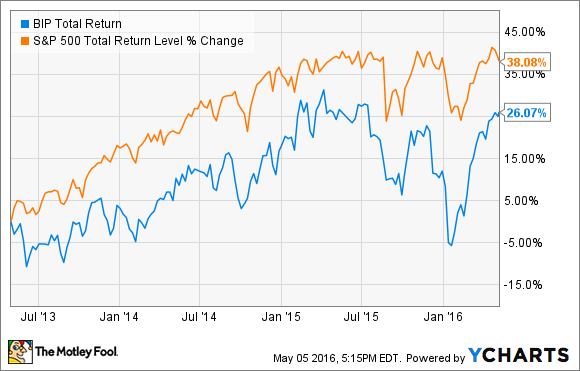 Some investors might see this relative underperformance from a seemingly go nowhere stock as a reason to throw in the towel. However, before selling, consider this: Brookfield Infrastructure Partners truly believes its units are now wildly undervalued.

A history of success
To understand why it is now undervalued, we need to first look at how investors are valuing the company and why they are getting it wrong. It all starts with the fact that Brookfield Infrastructure Partners has an exceptional track record of delivering growth over the long-term: 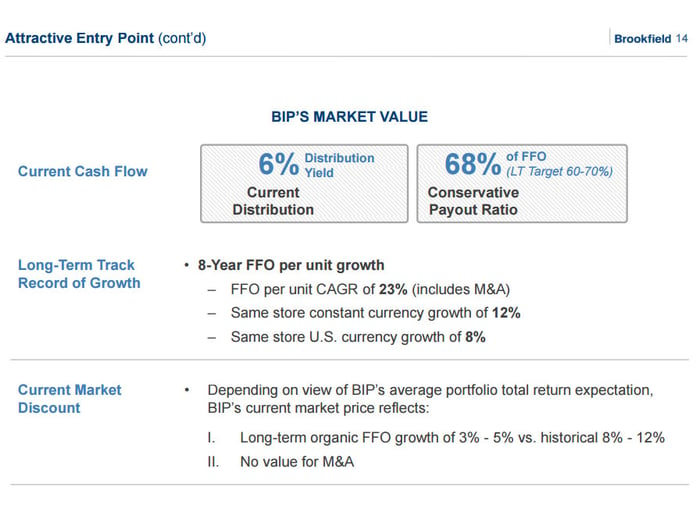 As that slide notes, over the past eight years the company has grown its earnings, as measured by FFO, by a compound annual rate of 23%. That's partially been driven by acquisitions, but also by very strong organic growth with same store FFO growth of 8% per year, which actually improves to 12% without the impact of foreign exchange fluctuations.

It's a pace that the market doesn't expect the company to be able to maintain given the company's current valuation. In fact, instead of valuing its growth within its historical 8% to 12% organic range, Brookfield Infrastructure Partners' current market valuation implies meager 3% to 5% organic growth. That's despite the fact that Brookfield has already said that it is expecting to deliver 9% FFO growth in 2016.

Very visible growth on the horizon
That's right at the high end of the company's long-term growth forecast, with the company estimating that its current portfolio is capable of delivering 6% to 9% organic growth over the next few years. That forecast is based on inflationary price increases, volume growth, and organic capital projects already commissioned: 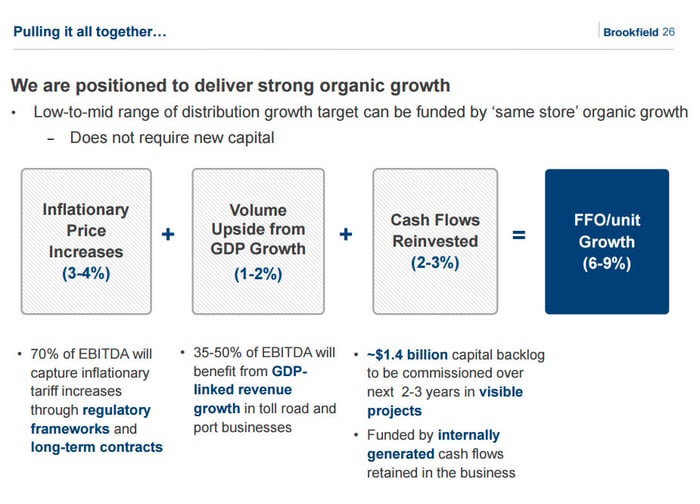 The company's low-risk growth projects alone are expected to drive solid near-term growth across much of its portfolio. For example, the company is investing $575 million across its transportation portfolio over the next three years, which when combined with expected volume growth, should drive compound annual earnings growth of 5% at its railroads, 18% across its toll roads, and 9% at its ports over the next five years. It's a similar story across most of the rest of its portfolio.

Further, the company's current valuation doesn't give it any credit for its M&A potential, which has been a huge value driver for the company over its history. It could also be a substantial value creator for the company going forward because of the compelling transactions already in its pipeline. For example, it has teamed up with its parent company Brookfield Asset Management (BAM -1.44%) and a number of other investors to acquire Australian port-and-rail company Asciano. It's a deal that will enable Brookfield Infrastructure Partners to invest a minimum of $350 million directly into the business as well as earn $95 million from its proportionate share of a toehold position it took along with Brookfield Asset Management and its consortium to facilitate the transaction.

In addition to that, Brookfield Infrastructure Partners is currently sitting on $3 billion of liquidity, which puts it in a strong position to capture opportunities as they arise. In fact CEO Sam Pollock noted on the company's most recent conference call that,

[...] We've got a couple of interesting opportunities that we haven't really got into much detail on this call, because they're just not quite at an advanced enough stage, but we think that they could also provide meaningful opportunities to deploy anywhere between $500 million to $1 billion in the next short while.

In other words, Brookfield Infrastructure Partners has ample acquisition opportunities ahead of it.

Add it all up
Even without that M&A potential, Brookfield Infrastructure Partners is substantially undervalued simply based on its current distribution yield and its organic growth potential. According to the company it should be trading at a yield in the 4% to 5% range as opposed to its current 5.4% yield. Because of that, it believes its unit price should trade much higher: 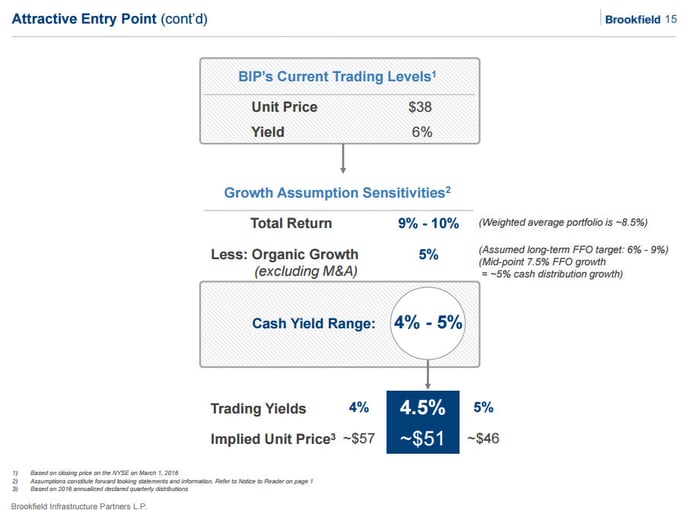 According to Brookfield's math, its units should at a minimum be trading north of $50 per unit, which is nearly $10 per unit above its current trading price. That's assuming the company doesn't complete any acquisitions. Suffice it to say, selling right now might not be the best idea.