Please ensure Javascript is enabled for purposes of website accessibility
Log In Help Join The Motley Fool
Free Article Join Over 1 Million Premium Members And Get More In-Depth Stock Guidance and Research
By Brian Feroldi - May 8, 2016 at 6:21AM

Shares tanked even though the company had a handful of positive developments occur during the month.

What: Investors in Merrimack Pharmaceuticals (MACK 4.75%) , a biopharmaceutical company primarily focused on cancer, had a rough April. The company's stock lost more than 18% of its value during the period, according to data from S&P Global Market Intelligence. 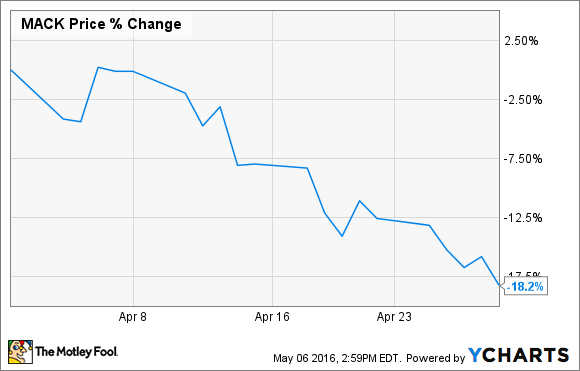 So what: The company didn't release any negative news during the month, so I'm left scratching my head as to why shares fell so hard.

Now what: Regardless of these developments, investors continue to focus their attention on Onivyde, Merrimack's recently launched pancreatic cancer drug. The company sold $4.3 million worth of product in the fourth quarter, but that only included two months of sales. (Onivyde officially launched on October 26th.)

The National Comprehensive Cancer Network recently added Onivyde to its list of clinical-practice guidelines for treating patients with pancreatic adenocarcinoma. This development should make it easier for the company to build awareness for the drug.

Merrimack has announced that it will be holding an analyst day on May 19 to give investors more information about its pipeline and commercialization plans for Onivyde. Anyone who is either bullish or bearish on this company's stock will want to tune in.