Please ensure Javascript is enabled for purposes of website accessibility
Log In Help Join The Motley Fool
Free Article Join Over 1 Million Premium Members And Get More In-Depth Stock Guidance and Research
By Keith Speights - May 10, 2016 at 9:16AM 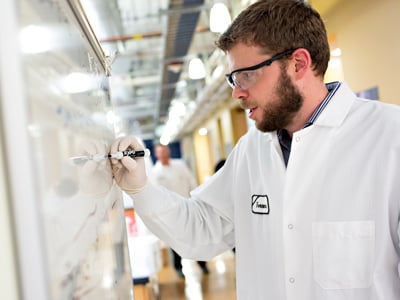 Within the first four weeks of 2016, Juno Therapeutics (JUNO) had shed over 40% of its market value. Since then, though, shares of the biotech have staged a nice comeback. While Juno's stock is still down around 13% year to date, the situation looks much better now than it did in early February.

Juno announced its first-quarter results after the market closed on Monday. Did those results make a difference for the biotech's rebound? Here are the highlights.

What happened with Juno this quarter?
Nearly all of Juno's revenue in the first quarter came from two big drugmakers. Juno recognized $3.8 million in revenue from its collaboration with Celgene (CELG). Novartis gave Juno $5.8 million as a milestone payment for product candidates involved in patent litigation that was settled in April 2015.

Juno's net loss worsened in the first quarter compared with the prior-year period as expenses increased across the board. A significant part of the biotech's research and development expense increase stemmed from milestone payments to Opus Bio in connection with Juno's JCAR018. Net loss per share improved versus the first quarter of 2015, however, because of an increased number of shares.

Probably the most important financial metric for Juno was its cash position, which remained very positive. Juno reported cash, cash equivalents, and marketable securities of $1.13 billion as of the end of first quarter. Celgene's purchase of another $47 million worth of Juno's stock helped keep the cash position higher than it would have been otherwise.

What management had to say
Hans Bishop, Juno's president and CEO, highlighted his company's CD19 candidates and the relationship with Celgene:

In the first quarter, we continued to advance our CD19-directed portfolio -- enrolling multiple trials, commencing manufacturing of clinical trial material from our Juno-operated facility, and securing Celgene's opt-in to product candidates in our CD19 program, which will accelerate our pace outside North America. Also, we recently reported encouraging early data for product candidates against two other targets, CD22 and WT-1, as our pipeline and research continue to progress beyond CD19.

Looking forward
For full-year 2016, Juno expects its cash burn to be between $220 million and $250 million. The biotech is in solid shape to fund this rate of cash burn for several years to come.

Investors will want to pay the most attention to Juno's CD19 program. In April, Celgene exercised its option to develop and market candidates from the program outside the U.S. and China. That shows that the big biotech likes what it has seen with the CD19 drugs in Juno's pipeline.

JCAR015 is the most advanced candidate in the CD19 program. The drug is in a phase 2 clinical study targeting potential treatment for relapsed/refractory acute lymphoblastic leukemia. Juno is optimistic that the drug could win FDA approval by 2017.