Please ensure Javascript is enabled for purposes of website accessibility
Log In Help Join The Motley Fool
Free Article Join Over 1 Million Premium Members And Get More In-Depth Stock Guidance and Research
By Demitri Kalogeropoulos - May 20, 2016 at 1:44PM

Which improving retailer makes the better bet for investors today?

But which rebounding retailer makes the better bet for investors right now? Here are a few key statistics to set the stage:

The fact that Wal-Mart's stock soared following a 1% Q1 sales uptick tells you a lot about the level of growth investors have come to expect from the retailing titan. After all, comparable-store sales were flat in each of the last three fiscal years (Target's was flat in 2013 but improved to 1% in 2014 and 2% last year). In that context even minor gains are cause for optimism.

Lowe's, meanwhile, isn't growing as quickly as its home improvement rival but its comps have been a healthy 4% to 5% over the last three years. And thanks to a steady housing market rebound, Lowe's is likely to keep this retailing advantage for some time. CEO Robert Niblock told investors late last year that industry conditions such as job and income gains "remain conducive for growth at least through 2017." The latest quarter's 7% comps surge is strong evidence for that thesis.

The comparison is even more stark with regard to profit trends, where Lowe's is trouncing Wal-Mart. Its net income is up 40% in the last five years. Wal-Mart's has actually declined over that period and should fall again in fiscal 2017 as it continues to pour cash into initiatives like e-commerce infrastructure and employee training. 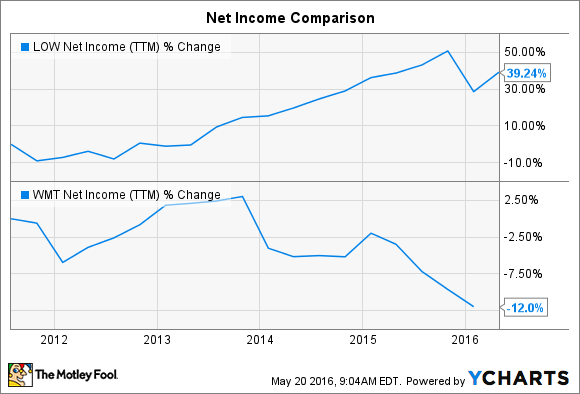 Wal-Mart still comes out on top in this match-up (and almost all others) when it comes to cash generation. The retailer produced $16 billion of free cash flow last year, which was nearly a record result despite those declining sales and profits. Over the last five years operating cash is up 37%, compared to just a 6% uptick for Lowe's. 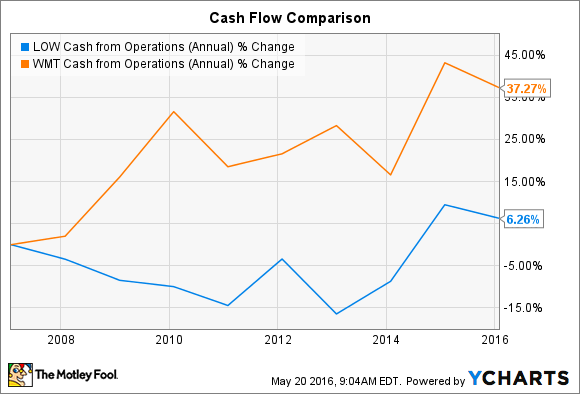 Few companies in the world can claim Wal-Mart's efficiency level on everything from capital spending to working capital management to supply chain investments. Lowe's, in contrast, has enough trouble closing the significant gap with Home Depot on key efficiency metrics like operating margin and return on invested capital.

Those financial wins help explain why Wal-Mart is the stronger dividend payer. Both companies are dividend aristocrats, having raised their payout for at least 25 consecutive years. But Wal-Mart boasts a much higher yield (2.9% vs. 1.4%) and a heftier commitment: Its payout is nearly 50% of earnings while Lowe's promises just 35% to its shareholders.

Despite the better dividend, Mr. Market is charging a significant premium for Lowe's faster-growing, more profitable business. You'd have to pay up on either an earnings or sales multiple basis to own the home improvement retailer right now. I think that valuation gap is worth it as Lowe's is better positioned to expand over the next few years while fending off e-commerce rivals. But it's a close call. If you're an income investor with a preference for market leaders, Wal-Mart is the more attractive long-term bet.