Please ensure Javascript is enabled for purposes of website accessibility
Log In Help Join The Motley Fool
Free Article Join Over 1 Million Premium Members And Get More In-Depth Stock Guidance and Research
By Jeremy Bowman - May 22, 2016 at 9:41AM

Buffett's blind spot has led him to miss out on the biggest stocks of the last generation.

Berkshire Hathaway's (BRK.A -0.51%) (BRK.B -0.17%) $1 billion purchase of Apple (AAPL -1.80%) stock in Q1 was surprising for several reasons, but foremost may be because it violated one of CEO Warren Buffett's cardinal rules. The Oracle of Omaha has long eschewed tech stocks, claiming that he doesn't know how to value them and doesn't believe in chasing innovation.

Buffett broke that rule a few years ago with a poorly timed bet on IBM (IBM 0.34%). At the time, he claimed that IBM had a pattern of setting auspicious goals and knocking them down. However, at the time of Berkshire's investment in Big Blue, the company was beginning a still-ongoing transition to a slimmer, service-based company that has steadily shed revenue and profits, sending the stock down along with it.

Now 0 for 1 in tech stocks, Berkshire, under the guidance of two of Buffett's hand-picked lieutenants, decided to take another swing in the sector with Apple.

The timing may seem a bit odd. Apple, after all, just reported its first quarterly revenue decline in 13 years, with iPhone sales falling sharply. As it saturates the smartphone market and sees sales slide in China, there are plenty of reasons to be worried about Apple, but that's what makes the timing of the purchase classic Buffett, even if he didn't personally pull the trigger. The world's foremost value investor has famously said to "Be greedy when others are fearful," and that's exactly what Berkshire is doing at a time when Apple trades at a P/E of just 10, or 7 when accounting for its cash haul.

Apple was one of the most successful stocks in the period from 2003-2015, returning more than 100 times its initial cost when the iPod was in its infancy. Berkshire seems to have missed out on the party, but such are the drawbacks of Buffett's philosophy.

Still, it seems strange for someone with the financial acumen, business experience, and access of Warren Buffet, who counts Microsoft founder Bill Gates among his closest pals, to cast off the entire technology sector, one that's now the country's biggest, because he doesn't "understand" it.

Buffett's refusal to invest in tech stocks caused him to miss out on the biggest opportunity in the stock market in the last 20 years. Indeed the three biggest companies by market cap are now Apple, Alphabet, and Microsoft. Following No. 4 ExxonMobil and No. 5 Berkshire itself, come Facebook (META -1.64%) and Amazon.com, making five of the top seven most valuable stocks tech companies. What's amazing is that all five, with the possible exception of Microsoft, were mere shadows of their current selves in 1996. Alphabet and Facebook didn't even exist, and Amazon was in its infancy. Today, those five businesses combined are worth more than $2 trillion, and almost all of that wealth was created in two decades.

With the exception of being tech stocks, these companies seem to represent typical Buffett stocks. They have economic moats, big, well-known brands, and many of them generate repeated purchases, a reason why Buffett favors a company like Coca-Cola. These businesses are also pretty straightforward to understand. Facebook, for example, hosts popular social networks and then sells ads targeted at those users. Amazon sells about anything you can imagine through the Internet.

While Buffett's argument that tech companies, especially highly valued ones, can be harder to predict than most of his favorite stocks makes sense, the companies above are not ones that will be easily disrupted. Their size should also make them targets for Berkshire as the company's size means it can only make meaningful investments in large companies

It's hard to fault Buffett's investing style. His penchant for buying and holding value stocks in the sectors he best understands has been wildly successful, both for him and the millions of Berkshire shareholders. But the conglomerate that once crushed the market has slowed down in recent years. As the chart below shows, Apple, Alphabet, and Amazon have all outperformed Berkshire by a mile, not to mention many of his favorite stocks including Coke and Wells Fargo. 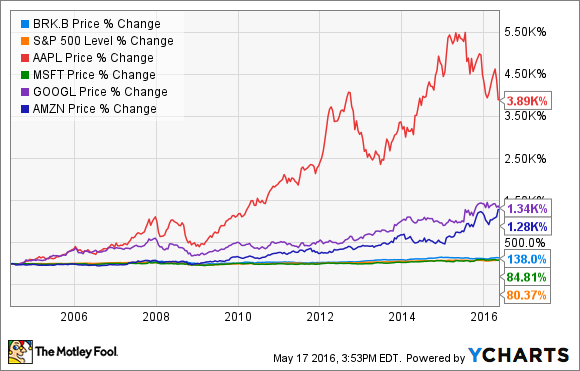 Facebook, which has tripled since its 2012 IPO, has also easily bested Berkshire in that time span.

By refusing to own tech stocks, Buffett likely avoided some stinkers, but ignoring the potential of the Internet may be his biggest mistake as an investor. Though his discipline in sticking with strengths has been an overall virtue, in this case it may be more like an oversight.