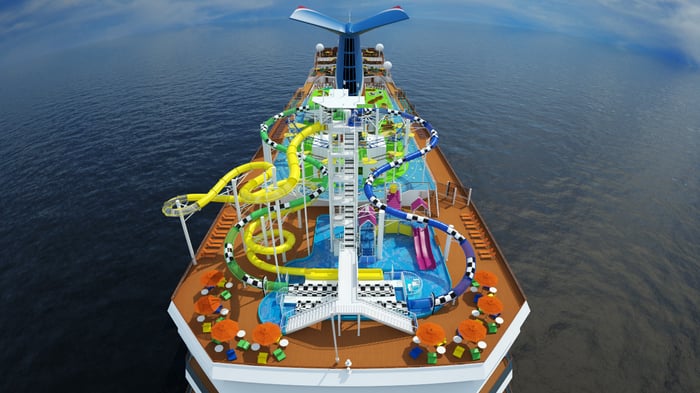 It's been choppy seas for investors in the cruise-line industry these days. Argus downgraded shares of Royal Caribbean (NYSE:RCL) this morning, taking its rating on the world's second-largest cruise-ship operator from buy to hold.

It's been a rough year for Royal Caribbean. The stock has shed nearly a third of its value. It began the year trading in the triple digits, but it has gone on to decline in seven of the past nine months.

Royal Caribbean had been weak since late last week after another analyst had soured on its larger rival. Morgan Stanley downgraded Carnival (NYSE:CCL) on Friday on concerns that industry metrics weakened in August. Surveying travel agents specializing in cruise bookings, Morgan Stanley analyst Jamie Rollo concluded that booking trends have softened and discounts are widening.

Exotic ports of calls and puts

Cruises can be a pretty sweet option for savvy travelers. You get to enjoy various destinations without having to pack and unpack. A plethora of food and on-board diversions can also make it a cost-effective deal.

The sailing isn't as smooth for the actual cruise-line operators. They are at the mercy of everything from global economic trends to weather changes to political tensions that could shoo away potential customers concerned about being on a ship. With supply constant and ticking higher as larger ships replaced older vessels, anything that can keep demand in check will force the industry to discount to fill empty berths. Something as simple as the Zika virus can lead to cancellations and folks rethinking their getaway plans.

Morgan Stanley's Rollo feels that travel agents dishing out chunkier discounts point to weak momentum heading into the balance of this year and into 2017. Rollo doesn't feel that Carnival will necessarily fall short of expectations for the current quarter, or even hose down its guidance, but it will be hard for the industry leader to ignore what cruise-booking specialists are seeing in pricing. He lowered his rating from equal weight to sell, slashing his price target from $54 to $48.

Carnival and Royal Caribbean aren't going to retreat. They continue to place orders for larger ships, assuming that the operating climate will be kinder in a few years when the new vessels come online.

On Tuesday, Carnival announced an order for three new ships that will run on Liquefied Natural Gas (LNG). It now has seven ships on order that will run on LNG. As a result, when it starts taking on passengers as early as 2019, Carnival will be less prone to the wild swings of traditional fuel costs. Leaning on oil can sometimes pan out. We saw that happen last year with fuel prices closing out the year at $316 per metric ton, 46% below year-ago levels. All three of the publicly traded cruise lines saw their stocks post double-digit gains last year.

It's a different story now. Carnival stock has held up better than Royal Caribbean, but it is still trading 16% lower so far in 2016. Unless trends improve, and Wall Street warms up to the industry again, it's going to be more rough sailing throughout the rest of the year.