What: Shares of Hortonworks, (NASDAQ:HDP) were down 22.1% as of 10:45 a.m. ET after the business computer software specialist filed a registration statement with the Securities and Exchange Commission for a proposed follow-on offering of its common stock.

So what: Hortonworks said that the exact number of shares to be sold has yet to be determined, but did confirm all shares in the offering will be sold by the company. In addition, actual SEC filing lists a proposed maximum aggregate offering price of $100 million -- a significant chunk of change considering Hortonworks' entire market capitalization as of this writing sits at roughly $600 million. 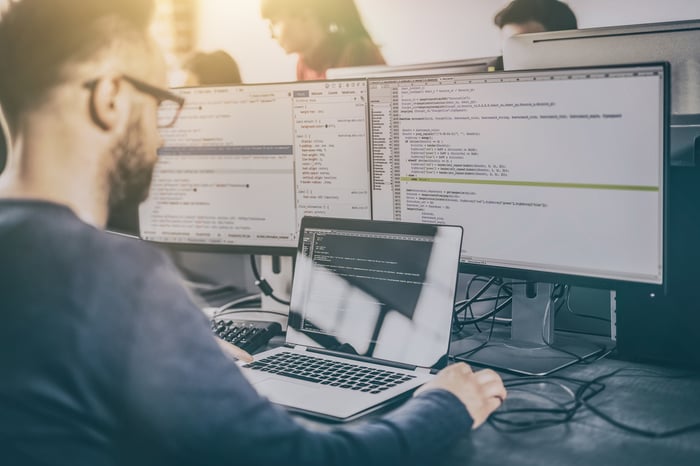 But this shouldn't be entirely surprising as Hortonworks continues to generate operating losses as it focuses on sustaining top-line growth. To be sure, the offering news came on Friday after the market close and was coupled with a separate SEC filing detailing largely strong preliminary results for Hortonworks' fourth quarter.

As it stands, Hortonworks now expects fourth-quarter revenue of $37 million to $38 million, the mid-point of which nearly triples the $12.7 million in sales it achieved in the same year-ago period. But that should translate to a narrowed operating loss of $50.7 million to $52.1 million (compared to $92.5 million in last year's Q4) and an adjusted EBITDA loss of $16.8 million to $17.5 million (compared to $21.3 million this time last year). For perspective, Hortonworks ended the third quarter with cash and cash equivalents of $25.1 million and short-term investments of $88.7 million.

Now what: Even so, with Hortonworks stock already down more than 27% year to date as of Friday's close -- albeit partly thanks to the broader market's steep pullback -- this wasn't exactly an opportune time for Hortonworks to issue new shares and further dilute existing investors. It's hard to blame the market, then, for showing skepticism over whether moving forward with an offering at this time could be a sign of impending weakness. For now, until we know more when the company officially announces quarterly results next month, I'm content watching Hortonworks stock from the sidelines.