Shares of ICU Medical hit a 52-week high on Thursday. Let's take a look at how it got there and see whether clear skies are still in the forecast.

How it got here
ICU Medical hit a 52-week high not by introducing a revolutionary new product or blowing away Wall Street's estimates; it did so by being consistent.

The company, which manufactures medical devices used in infusion therapy, oncology, and critical care applications, continues to grow its operations in a field which is only expected to increase in demand. In its latest quarter, ICU reported a 5.7% increase in sales, with a 30% increase in oncological products providing the biggest boost. International sales extended their outperformance of domestic sales, crushing them by a margin of 13% to 3% and signaling that ICU's products have plenty of avenues to growth.

Based on the company's current setup, its business hinges on its primary partner, Hospira , which it bought its critical care unit from in 2009. It's also worth noting that this is also the only business segment currently underperforming. Under the two agreements that ICU renewed with Hospira through 2018, ICU manufactures all of the custom-infusion IV sets that Hospira sells under the brand name SetSource, and Hospira almost exclusively uses ICU's CLAVE needleless IV system and oncological products. Suffice it to say, this match is providing positive results to shareholders.

How it stacks up
Let's see how ICU Medical stacks up next to its peers. 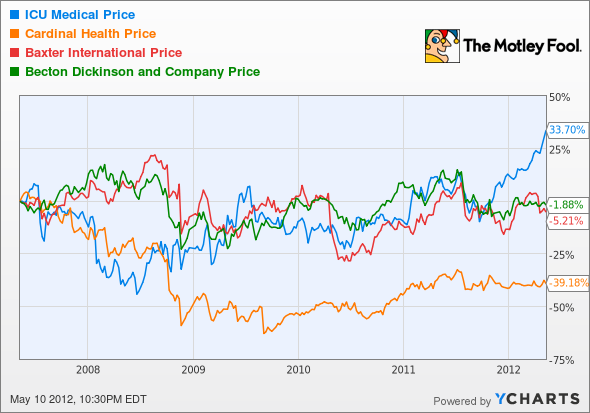 ICU has easily outperformed its peers over the past five years. Now let's take a closer look at how it compares with these much larger rivals.

If there was one word that could easily sum up the medical device sector, it would be "consistency." Neither ICU Medical nor its much larger peers look particularly overvalued, but they nonetheless keep plugging along and putting profits in the earnings column at the end of the day.

One of the few differentiating factors though has been the magnitude of ICU's earnings beats relative to the rest of the group. ICU has made a habit of crushing Wall Street's earnings projections by 10% or in four straight quarters. In comparison, Baxter International has barely surpassed estimates in only three of four quarters; Becton, Dickinson only two of the past four quarters; and Cardinal Health in all four quarters but by an average of only 4.6%. Don't get me wrong: All four companies have seen estimates moving higher, but ICU has shown considerably stronger growth over the past five years and is deservingly at a 52-week high.

What's next
Now for the real question: What's next for ICU Medical? That question is going to depend on whether it can continue to expand its product line internationally and whether it can find other partnerships besides its Hospira partnership that would make shareholders feel more comfortable about future growth prospects and cash flow.

Our very own CAPS community gives the company a highly coveted five-star rating, with 74 out of 88 members expecting it to outperform. As an original Small Cap to Rule Them All pick, you can count me among those who have made a CAPScall of outperform on ICU Medical. That call is currently up 27 points.

Considering that the demand for medical devices is only going to increase as technology improves and the population increases, the only thing standing in the way of ICU Medical and higher growth rates is increased competition. The company has shown on multiple occasions that Wall Street is undercutting its growth prospects and its double-digit growth levels internationally, and its oncological-products segment shows that it's capable of so much more than just the 5.7% sales growth it exhibited in its latest quarter. I remain very optimistic on ICU Medical over the long run and have no intention of closing my bullish CAPScall.

If you'd like the inside scoop on a company our Motley Fool Rule Breakers team thinks could have the next breakthrough product in the health-care field, then get your free report.

Craving more input on ICU Medical? Start by adding it to your free and personalized Watchlist. It's a free service from The Motley Fool to keep you up to date on the stocks you care about most.