Around the world, air travel is on the rise. The International Air Transport Association now estimates that the number of individuals globally travelling by air will almost double by 2035 – rising to 7.2 billion.

Most of that growth will come from the Asia-Pacific region, where increasing household incomes have allowed more and more people to travel the world. The Vice President of Marketing at Boeing Randy Tinseth stated that "Asia is now the first trillion-dollar aviation market in our forecast."

And all of this should have smart investors paying attention to Asian travel companies. And perhaps no company is better positioned to capitalize on the air travel boom than Chinese travel giant Trip.com Group Ltd (NASDAQ:TCOM) (formerly and better-known as Ctrip.com before its recent official name change to that of the US start-up it acquired in 2017).

Trip.com is poised to grow alongside both Asia-Pacific and global air travel trends. The company has repositioned itself as a global travel leader, targeting both international and domestic markets.

Here are three reasons Trip.com should be on any investor's radar. 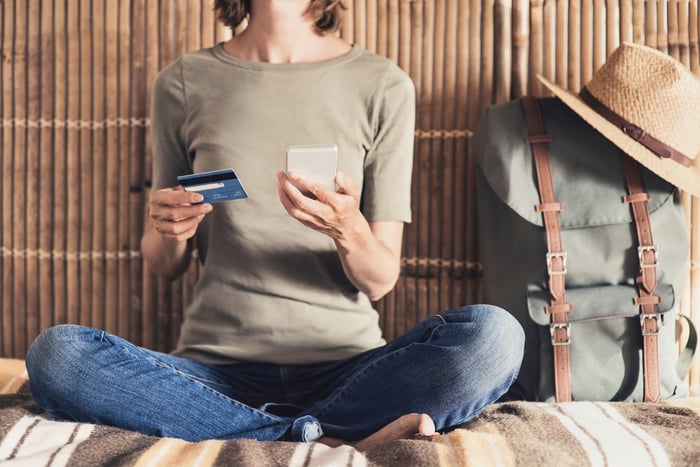 Trip.com already has a tight grip on the Chinese market, and is poised to grow as more Chinese opt to take vacations via air travel. The company has over 50% of the market share when it comes to selling first-class seats. The company's market share for economy seats is lower, below 30%, but still sizable. This means there is still room for growth.

Trip.com is also a  solid bet for investors because of the company's aggressive expansion outside of Asia.

When it was known as Ctrip, it also acquired the Trip.com domain through the acquisition of a San Francisco-based travel company. This rebranding of its name perhaps also reflects its ambition to position itself as an international travel firm rather than just domestic China.

The new Trip.com website lacks the parent's characteristic Chinese branding and logo. It's intended to cater to international markets and international customers.

Outside of this acquisition, Trip.com also owns Skyscanner, a travel website that allows consumers to search for cheap flights. This site has seen increased popularity, surpassing older flight search platforms like Expedia, Kayak, and CheapFlights.

Travel in the US is also set to grow in the coming years. According to the National Travel and Tourism office, the rate of Americans traveling abroad increased by 8.2% year-on-year in 2016.

Trip.com released its second-quarter 2019 earnings on September 10, 2019. The company's finances looked strong, as they reported net revenue growth of 19% year-on-year.

They also announced new critical partnerships that will help them grow in Asia, including a new partnership with East Japan Railway Company. This partnership allows it to purchase Japan rail tickets and expand its transportation offerings in the country.

Trip.com reported growth from both its international and domestic projects and has continued to grow its platforms to offer more services and generate more income. The company now expects revenue from China to outpace other companies in the industry.

This earnings report reflected its strength in a range of markets as well as the way the company has utilized technologies and partnerships to expand its market share and lock in future profit streams.

With its expansion plans in both the Asian-Pacific and international markets, Trip.com is will likely be successful in the coming years.

The company still has a lot of room to grow in China, and will likely capitalize on new Chinese air travelers. Internationally, the company is also looking strong, catering to both European and American customers through its Trip.com platform and its Skyscanner platform.