Many investors have expected for years that interest rates on mortgage loans would eventually rise from record-low levels. But the recent rise in mortgage rates has taken everyone by surprise because of the speed with which rates rose and the extent of their jump.

In just the past two months, 30-year mortgage rates have risen by more than a full percentage point from their lowest levels around 3.5%, with a catastrophic surge taking the rate to 4.75% late last week.

Do soaring rates mean that it's too late to refinance your mortgage?

Below, we'll answer that question, but first, let's look at the impact that rising rates have on the housing market more generally. 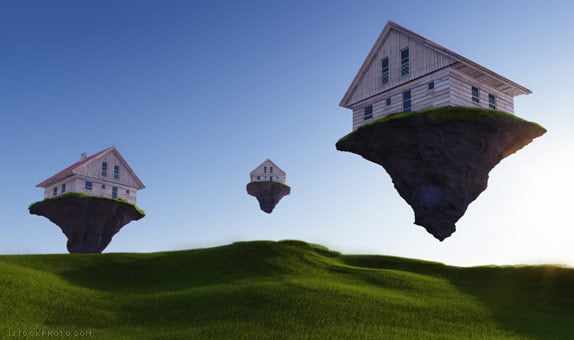 A tale of two borrowers

For would-be homebuyers, rising rates are particularly bad, as rates on new-purchase mortgages have a huge impact not just on the amount of your monthly payment but on determining how much money a bank will allow you to borrow. With home prices on the rise, some would-be homebuyers will end up getting priced out of their markets as a result of these rate increases, and that in turn has some analysts concerned that the new housing boom could come to an abrupt end.

By contrast, current homeowners with existing mortgages don't feel quite the same pain from rising mortgage rates. As long as you have a fixed-rate mortgage, your rate is locked in for the duration of your loan. That puts you in a no-lose situation; you can refinance if rates are sufficiently low, but you can keep your existing mortgage if rates rise.

Still, those looking to refinance have to be disappointed by the big rise in rates recently. For many, it will no longer make sense to try to refinance, and already, we've seen signs from major lenders Bank of America (NYSE:BAC), JPMorgan Chase (NYSE:JPM), and Wells Fargo (NYSE:WFC) that refinancing activity has been on the decline. For those banks, that comes as unwelcome news, especially with JPMorgan also facing the potential need to raise capital after regulators raised capital requirements above the bank's current levels. Even for B of A and Wells, taking away refinancing income will make a full recovery from the financial crisis even harder.

Why refinance now?
But for some, even the recent rise could leave you with some potential savings. The key to the refinancing decision is how much money you can save.

Refinancing typically involves closing costs and other expenses, so you need to save enough on your monthly payment to recoup those upfront costs within a reasonable period of time. Typically, one rule many people follow is that if you can cut your interest rate by a full percentage point without having to pay points or other big costs to get a new mortgage, then refinancing makes sense.

With rates between 4.5% and 4.75%, you might think that refinancing wouldn't make sense for anyone. But as recently as five years ago, 30-year mortgage rates were above 6%.

So if you've been procrastinating for a long time or if your financial situation only recently improved enough that you could get a bank to think about letting you refinance, then it might be economically viable for you to refinance right now.

But should you refinance now, or wait?
The big question, though, is whether you should refinance even if it makes economic sense. After all, if rates drop from here, you might be able to lock in an even more attractive rate.

In assessing whether waiting makes sense, put yourself into one of three categories:

Last but not least, consider putting pressure on your lender to give you a better deal. With refinancing activity drying up, mortgage specialists are already under stress from their employers to get deals done to keep income flowing in. Don't expect huge concessions, but small reductions in closing costs or interest rates can make the difference between a viable refi and a failed one.

Don't stop watching
No one knows where interest rates will go next, but if you have an outstanding mortgage, it still might not be too late to refinance. Now's the time to run the numbers and get yourself in position to act quickly if mortgage rates turn around and give borrowers some relief in the weeks and months to come.