There was a time, not so very long ago, when a mortgage interest rate even approaching 4% would send countless Americans to their banks to refinance their homes.

Now, after five years with rates below or just above that level, many people have forgotten that on a historic level, sub-4% mortgages are an incredible deal. In fact, according to Freddie Mac (OTC:FMCC), the average annual interest rate on a 30-year mortgage has topped 4% only once in the past five years, when it came in at 4.17% in 2014. Even in that year, the average dropped to 3.86% in December, a number it has hovered around for nearly two years.

Heading into 2017, though, with a new Donald Trump-led administration taking over the White House, rates may very well rise, as they have done by about a quarter of a percentage point since the election ended. That could be bad news not only for people seeking to buy a new home, but also for people looking to sell.

"With the incoming administration's policies driving a large portion of upward rate momentum, mortgage rates will be hard-pressed to make significant improvements until after Trump takes office," wrote MortgageNewsDaily.com. "Rates can move for other reasons, but it would take something big and unexpected for rates to move appreciably lower."

Why are mortgage rates moving higher?

Trump winning the presidency has pushed bond yields higher and that has caused mortgage rates to inch up. It's important to not that today's rates, which still average below 4% for a 30-year mortgage, remain ridiculously low by historical standards. Over the past 45 years that average rate has been 8.26%, according to data from Freddie Mac.

Bond rates have been steadily rising since Trump won the presidency. If that continues then mortgage rates will follow. As the following chart shows, 10-year Treasury notes, a common form of bond, have seen rates move higher since November. 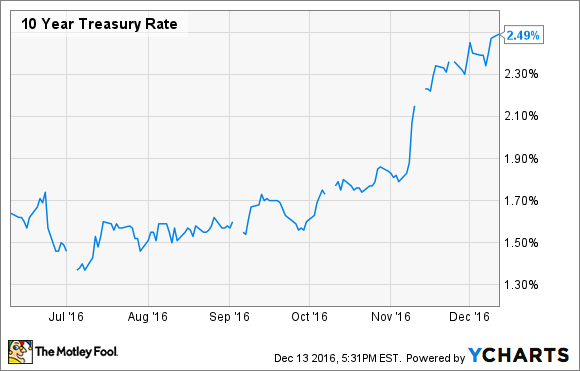 What do higher mortgage rates mean?

That doesn't sound like much, but it works out to $184.56 extra each year and $5,536.80 over the 30 years of a loan. One quarter of a percent up or down may not change how much house most buyers can afford, but if rates move from steadily below 4% to 5% or even higher, it could change the housing market.

"The ultimate problem is the impact of rising rates on home values," Stu Feldstein, president at SMR Research Corp., a mortgage-research firm told The Wall Street Journal (subscription required). "We're back into a bubble condition in part because of low rates that have enabled people to buy houses much more expensive than their incomes could afford."

How you should respond to the potential of rising rates depends on whether you're a buyer or seller. If you plan to sell your home in the near future, it makes sense to list it now before rates rise, which could not only thin the number of buyers but also push prices down.

If you're a buyer, the choice is less clear, and it becomes a bit of a math problem. Paying more interest on your mortgage is bad, but if higher mortgage rates force house prices down while keeping others out of the market, that could actually be a benefit.

For those who already own a home they intend to stay in, rising rates mean it's time to refinance if you have a variable-rate mortgage or one where the interest rate is above the current still-near-historic lows. In that case, it becomes a different equation: Here, refinancing makes sense if the amount you'll save from doing so will pay back whatever closing costs you incur in a time period that's less than the length of time you plan to remain in the home.

Why Are Mortgage Rates Rising, and What Does That Mean for You? @themotleyfool #stocks $FMCC Next Article
Current