Please ensure Javascript is enabled for purposes of website accessibility
Log In Help Join The Motley Fool
Free Article Join Over 1 Million Premium Members And Get More In-Depth Stock Guidance and Research
By Matthew Frankel, CFP® - Updated May 29, 2018 at 3:22PM

Is a fixed-rate or adjustable-rate mortgage the best choice for you?

When you apply for a mortgage, there are two basic varieties to choose from: fixed-rate or adjustable-rate. By far the most common mortgage product in the United States is the 30-year fixed-rate, and the most common adjustable-rate variety is the 5/1 ARM. So let's take a deeper look at these two types of loans and see which could be the better choice for you.

How these loans work -- the quick version 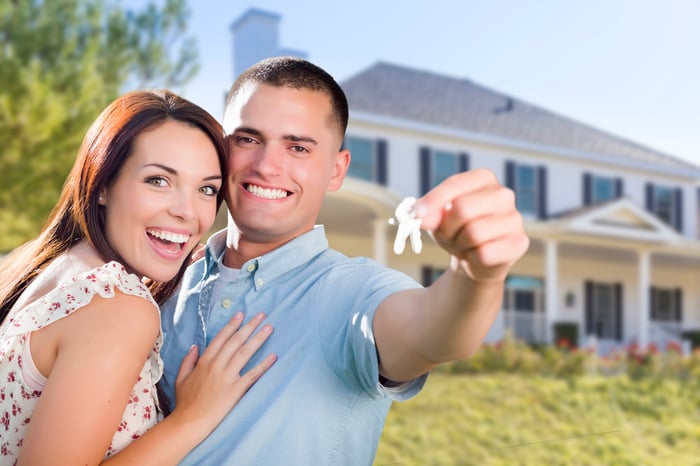 I'll spare you the mathematics of mortgage amortization, but the result is a monthly principal and interest payment that doesn't change. However, it's worth noting that since property taxes and hazard insurance can change over time, and are generally paid along with your monthly mortgage payments, your overall monthly mortgage payment won't necessarily stay exactly the same.

On the other hand, with a 5/1 ARM, your initial interest rate will be fixed for a period of five years. Generally, the initial rate of a 5/1 ARM is lower than that of a 30-year fixed-rate mortgage, and is sometimes referred to as a "teaser" rate. After the initial five-year period, your interest rate and monthly payments will adjust annually, based on an index that is determined by some underlying interest rate (such as U.S. Treasury yields). After five years, the rate will reflect the current level of the index, and subsequent increases or decreases will be determined by changes in the index.

For most borrowers, the 30-year fixed-rate mortgage is a better option

As of January 2017, only 5.4% of borrowers are choosing adjustable-rate loans, and for good reason. Simply put, with interest rates still just above record lows, the probability that rates will be lower once the initial teaser rate expires is not good.

At the current average of just 4.17%, 30-year fixed-rate mortgages are cheap enough that it's simply not worth taking the risk of a big increase in the mortgage payment a few years down the road.

To illustrate this point, consider that although the overall percentage of buyers who currently choose ARMs is still low, it has gone up considerably in recent months, in response to rising interest rates. In January 2017, the average 30-year mortgage rate was 4.31%, and 5.4% of buyers chose an ARM. Just two months prior, in November 2016, the 30-year mortgage rate averaged 3.81%, so just 3.9% of buyers found an ARM appealing enough to use.

When an adjustable-rate loan could be the better choice

As I mentioned, the 5/1 ARM mortgage comes with a lower interest rate, but its cost is certain only for the first five years. For this reason, it could be the best choice for a buyer who knows that he or she will own the home just for a few years and wants to keep expenses as low as possible.

In addition, let's say that your credit isn't great -- a 630 FICO score, for instance. This is above the minimum threshold for conventional mortgage approval, but generally comes with a significantly higher-than-average interest rate. As of this writing, a buyer with this credit profile can expect an APR of about 5.46% on a 30-year fixed-rate mortgage, or 4.92% on a 5/1 ARM.

So, it could be a smart idea for this buyer to get the 5/1 ARM and keep the mortgage payment lower for a few years, with the intention of working on his or her credit score in the meantime and refinancing into a fixed-rate loan before the interest rate on the ARM resets. Of course, there's no guarantee that fixed-rate mortgage interest rates will remain low, so this strategy won't always work out favorably.

Finally, the 5/1 ARM could be a good choice for long-term homebuyers when interest rates are relatively high. Obviously, this is not the case right now. It's highly unlikely for 30-year mortgage rates to come down significantly from their current level. However, if the market rate for a 30-year mortgage were to jump to, say, 7% or more, an ARM could possibly let you take advantage if rates fall during the five-year "teaser" period.

What is the difference in interest rates and monthly payments?

The actual difference between fixed-rate and adjustable-rate interest rates isn't a constant gap -- rather, it changes over time in response to market conditions. As I write this (February 2017), the average 30-year fixed rate mortgage comes with an interest rate of 4.17%, while the average 5/1 ARM has a rate of 3.18%, so the difference is just under 1%. 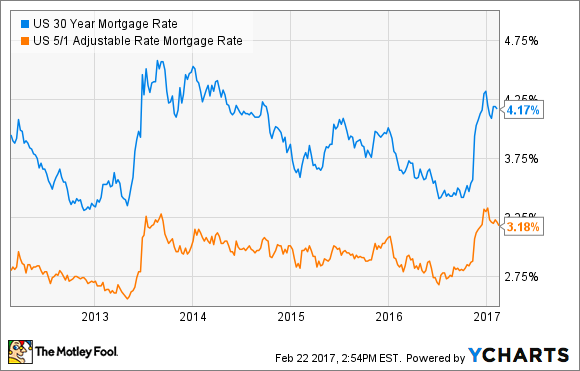 What does this mean for your initial monthly payments? As an example, on a $200,000 30-year fixed-rate mortgage, the average rate would translate to a monthly mortgage payment (principal and interest) of $975. On the other hand, the 5/1 ARM would have an initial payment amount of $863 -- a savings of more than $100 per month.

Of course, the downside is that the ARM payment isn't set in stone. It can (and probably will) change once the initial five-year period is over.

When it comes to buying a house, no two situations are identical. This is why a variety of mortgage options exist, and why no single option is right for everyone. Having said that, unless you plan to be in your new home for only a few years, or there's some other specific reason why a 5/1 ARM makes more sense, the vast majority of buyers are better off with a fixed-rate mortgage like the 30-year version that has become the industry's standard.