Many homeowners look to refinance so they can take advantage of more attractive interest rates. In a nutshell, refinancing is the process of exchanging your current mortgage for a new one, typically with a better interest rate. The goal of refinancing is usually to lower one's monthly payments, though some people refinance to change the length of their loans -- a move that won't necessarily reduce your payments (such as moving from a 30-year loan to a 15-year loan), but will leave you liable for fewer payments over time.

Though refinancing can be a wise move for some people, it's not always the best way to go. Here are three reasons to think twice before refinancing a mortgage today. 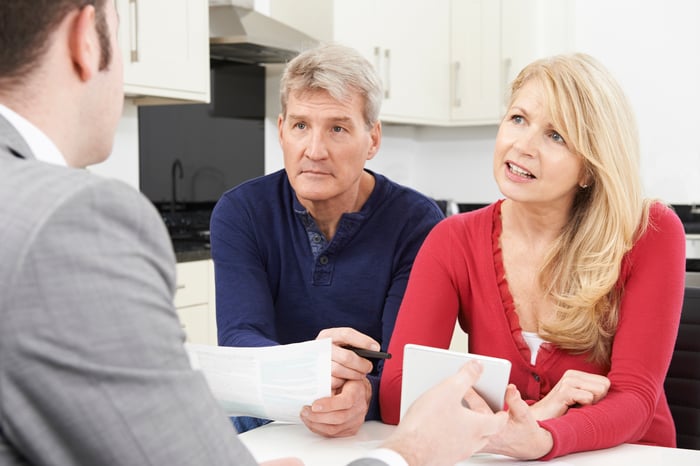 1. You're not planning to stay in your home much longer

Just as there are numerous costs associated with closing on a mortgage, so too does refinancing come at a cost. Closing costs on a refinance typically run between 2% and 5% of your loan's value, so even if they serve the important purpose of lowering your monthly payments, it'll take some time for you to recoup those closing costs and come out ahead. If you're only planning to stay in your home for another year or two, spending all that money up front may not be worth it.

As an example, imagine you're able to lower your current mortgage payments by $100 a month by refinancing, but that it costs you $4,000 to go through with the process. This means that it will take you 40 months, or close to three and a half years, to recoup your closing costs. Now if you're planning to stay in your home longer than that, it might pay to look into refinancing; otherwise, you won't gain a thing.

2. Interest rates have gone up

The point of refinancing is to lock in a more favorable interest rate. But given that the Federal Reserve just raised its benchmark interest rate for the second time in three months (and the third time since late 2015), you may come to find that you're better off sticking with the rate you already have.

Now if your credit is significantly better today than it was back when you first signed your mortgage, it might pay to see what rate you're eligible for -- despite the fact that rates are going up across the board. But if your credit score hasn't really changed and you locked in a fairly low rate to begin with, there's a good chance you won't actually benefit from refinancing.

As a general rule, refinancing rarely makes sense if doing so won't lower your interest rate by at least one percentage point. Given where rates are going, passing up a refinancing opportunity could be a no-brainer.

3. You may not pay off your home in time for retirement

Though this isn't always the case, refinancing often means resetting the clock on a mortgage. Say you've been making monthly payments on a 30-year mortgage for five years and decide to refinance to a new 30-year loan. Once that happens, you'll get a new amortization schedule that allows for 30 years of payments. And while your individual monthly payments might go down in the process, you'll be increasing the term of your loan back up to 30 years.

This can be problematic for a number of reasons. First, the longer it takes you to pay off your mortgage, the more you'll wind up spending on interest. Furthermore, refinancing could constitute a major setback if your goal is to pay off your home in time for retirement. The Consumer Financial Protection Bureau reports that the percentage of homeowners 65 and older who still carried mortgages jumped from 22% back in 2001 to 30% in 2011. Though lowering your monthly payments in the near term will give you more financial flexibility, not to mention more cash on hand to invest with, the downside is that refinancing might cause you to have less flexibility and less cash in retirement.

Though refinancing a mortgage does have its benefits, be sure to take these glaring drawbacks into account before moving forward. The last thing you want to do is refinance your loan and regret it for years to come.