Please ensure Javascript is enabled for purposes of website accessibility
Free Article Join Over 1 Million Premium Members And Get More In-Depth Stock Guidance and Research
By Maurie Backman - Mar 31, 2017 at 9:29AM

Homeownership has its benefits, but they come at a cost. Here are some key points to consider when making your decision.

Buying a home is a major financial undertaking, so much so that more and more Americans are actively choosing not to do it. According to Zillow, nearly 14% of renters with good credit and high enough earnings to afford homeownership are opting to stay put rather than buy.

Though homeownership does have its benefits, buying property also means taking on the risks and expenses involved. If you're trying to decide whether to take the leap and apply for a mortgage or keep on renting, here are a few questions to ask yourself. 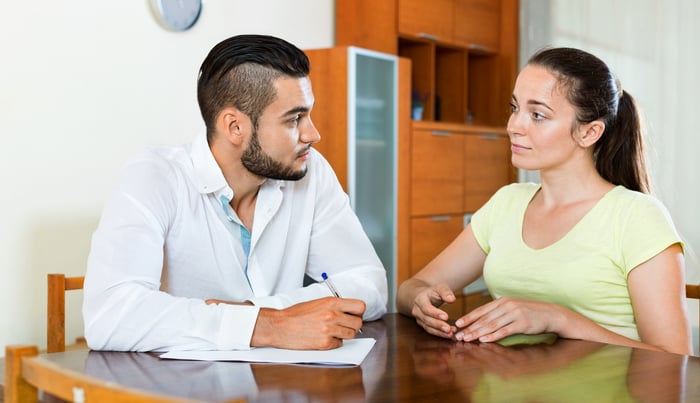 Though not all lenders require a 20% down payment, if you fail to come up with that amount, you'll most likely wind up paying private mortgage insurance, or PMI. PMI allows lenders to protect themselves by charging homeowners a premium on top of their existing monthly payments. Most of the time, PMI is equal to 0.5% to 1% of a home loan's value. If, for example, you get a $240,000 mortgage at 1% PMI, you'll add $2,400 a year, or $240 a month, to the cost your loan. This can make homeownership even more expensive and increase your risk of falling behind on payments, so if you don't have enough cash on hand to cover 20% of your home's purchase price, you may want to hold off and save.

2. Do I have adequate emergency savings?

If you're thinking of becoming a homeowner, it's not just your down payment you'll need to save for. You'll also need some reserves on hand to cover the unexpected. Though the typical homeowner spends 1% to 4% of his or her home's value on annual maintenance, that figure is meant to cover run-of-the-mill upkeep. Throw a major issue into the mix (think damaged roof or sinking foundation), and you could be looking at thousands of dollars in bills. If you don't have adequate savings to tap, you'll face a host of serious financial consequences, so before you even think about buying, you'll need to have a well-stocked emergency fund.

Just how much savings do you need? There's no single answer, but as a general rule of thumb, six to nine months' worth of living expenses is a good target to aim for. If you're buying an older home with known issues, however, you may want to sock away even more.

As a homeowner, not only can you write off your mortgage interest (as long as your loan doesn't exceed $500,000 as a single tax filer or $1 million as a couple filing jointly), but you can also deduct your property taxes and whatever points you pay on your mortgage. Oh, and remember the aforementioned PMI premiums? Those are tax-deductible, too, provided you don't earn too much money. If you're looking for a way to score some sizable tax breaks, buying a home is a good way to achieve that goal.

4. Am I planning to stay put for the foreseeable future?

If you don't see yourself living in your home for too long after you buy it, sticking to a rental might be a better choice. The reason? Though homeownership comes with a host of tax benefits, there are also closing costs involved when getting a mortgage. Those costs typically equal anywhere from 2% to 5% of your home loan's value, which means that if we split that difference down the middle at 3.5% for a $300,000 mortgage, you'd be looking at $10,500 in up-front fees. Because it usually takes a number of years of living in your home to recoup those closing costs (whether it's in the form of tax savings or an increase in your property value), you'll come out ahead financially by renting if you're planning to relocate in just a year or so.

5. Will getting a mortgage prevent me from meeting other financial goals?

Housing is the typical American's single largest expense, and while you may get some of that money back in tax savings, you'll also need to consider what those housing payments will force you to give up. According to Bankrate.com, 37% of homeowners say that having a mortgage has prevented them from saving money. Meanwhile, a report by the MacArthur Foundation found that between 2011 and 2014, 52% of Americans were forced to make at least one major money-related sacrifice in order to afford their housing payments.

Before you take on the cost of homeownership, think about your other financial goals and the extent to which covering a mortgage payment will prevent you from meeting them. While it may be nice to have a place to call your own, you don't want to derail other key objectives, like college or retirement savings, in the process.

Homeownership can be a smart financial decision, but it's not right for everyone. Be sure to consider the pros and cons of renting versus buying before making a move.