It's not just for lack of desire...

Homeownership has long been the American Dream, but younger workers are having a harder time than ever making it a reality. According to the U.S. Census Bureau, the homeownership rate for millennials 35 and under dropped down to 35% in 2016, marking a 4% decline from 2010. And for the first time in more than 100 years, a greater percentage of 18 to 24-year-olds live at home with their parents than on their own or with a spouse or partner.

There are a number of reasons millennials aren't buying homes like they used to. Living costs are climbing in general, and salaries aren't doing the best job of keeping up. But it's hard to ignore the extent to which student loan debt and rising interest rates are contributing to this recent trend. 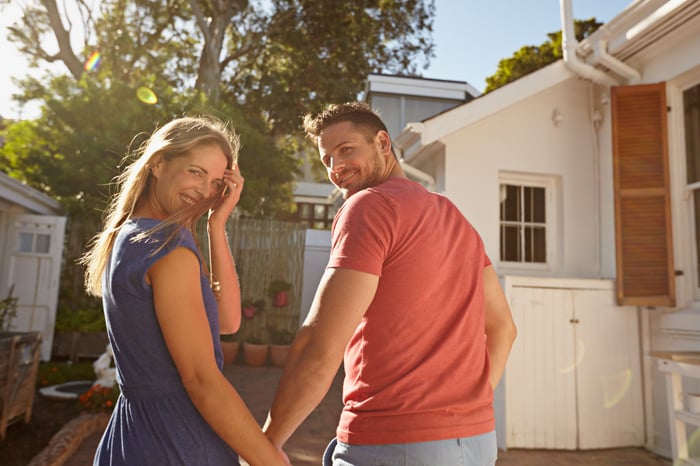 Student Loan Hero reports that the average Class of 2016 graduate has $37,172 in debt. With tuition prices rising faster than inflation, over the past several years, a growing number of younger Americans have had no choice but to rack up loads of debt in order to cover their college costs. But nagging student debt can be a major obstacle on the road to homeownership. In fact, an estimated 41% of college grads have postponed buying a home as a result of having too much student debt. Throw in the fact that wages have remained relatively stagnant in recent years, and it's no wonder homeownership is so out of reach among the 35 and under set.

When the Federal Reserve raised interest rates back in December 2016, it wasn't a particularly large increase -- yet it almost instantly spelled trouble for younger would-be homeowners. According to Fitch Ratings, the average millennial borrower lost 9% of what's known as mortgage capacity as a result of that seemingly modest 0.25% rate hike.

In a nutshell, mortgage capacity is an analysis of a potential borrower's financial standing relative to his or her projected debt level. Lenders use it to figure out how likely prospective borrowers are to repay their debts, and how much of a mortgage they qualify for.

Following the Fed's December rate increase, the average would-be homeowner lost a fair amount of borrowing opportunity -- so much so that a buyer who would've been eligible to borrow $120,000 back in October 2016 (the median mortgage for borrowers under 35 as of early 2017, according to the Federal Survey of Consumer Finances) would only be approved for a $109,000 loan as of January.

Given that interest rates went up yet again in mid-March, younger homebuyers are likely to see their borrowing potential drop yet again in the coming months. Add in the fact that lenders are stricter these days across the board, it's no wonder homeownership levels are shrinking among younger Americans.

Clearly, millennials vying for homeownership status have some challenges to overcome, but if you're looking for a piece of that good old American Dream, there are some ways to improve your odds of success. For one thing, work on building your credit. The higher your score, the more likely you are to not only get approved for a mortgage, but snag a more favorable rate.

Now if you're a fairly recent college grad, that's easier said than done, but if you make a habit of paying your student loans and bills on time and in full, you can establish a strong credit history in a relatively short period of time. Keeping your credit utilization ratio (the measure of how much of your available credit you're using) to 30% or less can also increase your likelihood of getting approved for a mortgage, so if you have a total of $10,000 in available credit, make sure not to rack up more than $3,000 of debt at any given point in time.

Finally, save aggressively not only for a down payment on your home, but so that you have ample funds to cover your closing costs, moving expenses, and subsequent emergencies (which are often unavoidable when you own property). At a minimum, aim to put down 20% of your home's value, as doing so will help you avoid the added expense of private mortgage insurance.

Though owning a home may not be as easy for today's younger Americans as it was 10 to 20 years ago, that's no reason to throw in the towel and resign yourself to a decade of throwing away money on rent. If you work on building your credit and socking away enough cash, you may come to find that homeownership is a more affordable, attainable option than you'd think.