Please ensure Javascript is enabled for purposes of website accessibility
Log In Help Join The Motley Fool
Free Article Join Over 1 Million Premium Members And Get More In-Depth Stock Guidance and Research
By Maurie Backman – Updated Apr 30, 2018 at 8:15AM

How do you compare? And can you take these steps to cut your costs?

Though there are debates as to whether homeownership is more cost-effective than renting or not, one thing's for sure: There are numerous benefits to owning, provided you can afford to keep up with the costs of having that property to call your own. That said, millions of Americans struggle with their housing costs, and for some, that boils down to taking on more house than they can afford.

So how much does the typical American spend to own a home? In a new study by NerdWallet, the average U.S. homeowner spends $1,443 a month on housing, including a mortgage payment, property taxes, homeowners insurance, and homeowner association dues -- a sum roughly 30% of homeowners consider to be expensive. 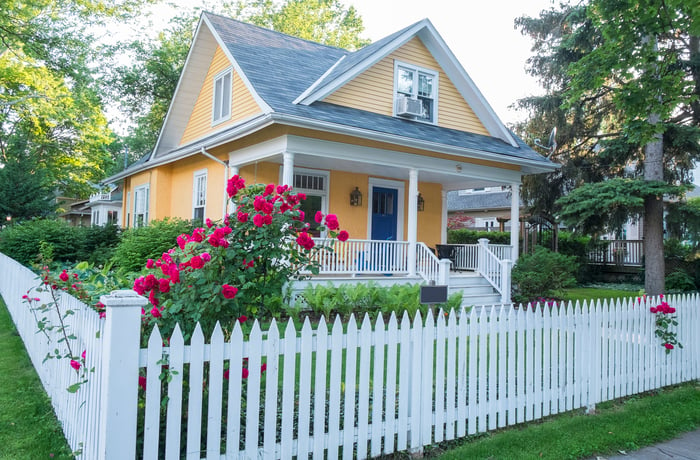 What's surprising about that sentiment, however, is that in 2016, the last year for which this data is available, homeowners spent an average of 21.5% of their income on housing. That's well below the 30% threshold most financial experts recommend.

If you're having a hard time keeping up with your housing costs, or they're causing you stress, you may have options for lowering them and freeing up more of your income. Here's how to eke out some savings.

Refinancing is the process of trading in one home loan for a new one, and it's a smart idea if you're eligible for a rate that's considerably lower than your current one. For example, if your credit score has improved since you first signed your mortgage, you may be eligible for a more favorable rate that lowers your monthly payments.

That said, refinancing isn't for everyone. If you're not planning to stay in your home for more than another couple of years, you might lose out financially by refinancing because the process typically comes with closing costs, and if you sell a year or two after signing your new loan, you may not recoup them. Refinancing can also mean resetting the clock on your mortgage (such as trading one 30-year loan for another 30-year loan), thus lengthening the time during which you're making payments. If you are going to refinance, act quickly, because mortgage rates have slowly but surely been creeping up.

The annoying thing about property taxes is that they have a tendency to rise over time. To avoid an even more burdensome bill, you might consider filing an appeal the next time your property's assessment comes in at a higher number. I did this last year, won my appeal, and shaved a nice little chunk of money off of my property taxes.

Of course, you'll need to consider the cost and time you'll sink into that appeal. Where I live, it costs just $25 to file an appeal if your property is valued at $500,000 or less, but that number climbs to $100 once that threshold is surpassed. Different localities have different fees and rules, though. You'll also need to make sure you have a valid case, which means seeing what comparable homes in your area have sold for recently and determining that your property is being assessed higher. But if you're willing to make the effort, you might shrink your tax bill and pocket some savings that way.

3. Stay on top of your homeowners insurance

It's estimated that 40% of homeowners don't know how much they're paying for insurance, since those premiums are frequently rolled into their monthly mortgage payments. However, it pays to determine exactly what you're being charged and shop around for a better policy, particularly if your insurance company has imposed a number of hefty increases over the years.

Furthermore, be sure to keep your insurance company up to date on changes or improvements you make to your home that could lower your bill. For example, I recently installed a sensor that detects leaks and shuts off my water automatically when that happens. Once I updated my insurance company with this information, my premium went down right away.

Though owning a home is a big expense, it's often a worthwhile one to take on. Still, there's no reason not to take steps to lower your ownership costs. Besides, think about it this way: The more money you save on the basics, the more you'll have available to cover the home repairs that inevitably creep up on you.