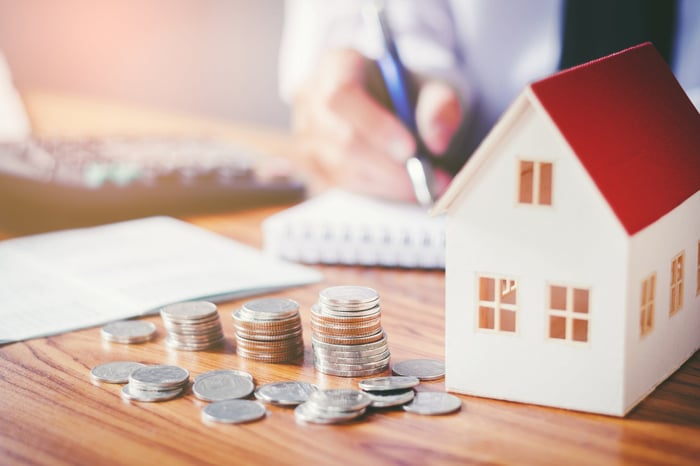 For millions of Americans, refinancing a home loan is on the to-do list this year.

Refinancing has become incredibly common, with the Mortgage Bankers Association (MBA) reporting that the refinancing index in mid-November was 98% higher than during the same week last year. The refinancing index measures the number of applications homeowners submit to refinance mortgage loans, and it's reported weekly.

While the index showed that 0.3% fewer refinance applications came in last week than during the prior week, the overall view reveals that almost double the number of people are applying to refinance a loan compared with just a year ago. And there's a very good reason for that.

Huge interest in refinancing is driven by record low rates

The millions of Americans refinancing their mortgages are generally making a very smart financial move.

Mortgage rates have dropped substantially year over year, with rates recently hitting a 50-year low. Those who already own homes are uniquely positioned to take advantage of these record low rates and reduce what they're paying on their loans.

In fact, current homeowners actually benefit more easily from today's low rates than those who purchase a new home. That's simply because they don't have to try to find a house in today's competitive market, and aren't constrained by housing prices.

Record low mortgage rates have sent demand for homes up and prices skyrocketing, which has limited the number of new buyers who can take advantage of the unprecedented bargains on home loans. That largely explains why applications for refinance loans accounted for 69.8% of all applications last week, down from 70% a week prior. With current homeowners eligible to potentially reduce their monthly payments by hundreds of dollars a month and slash their total interest costs by thousands of dollars over the loan, it's no wonder so many people are scrambling to refinance.

To get an idea of how smart refinancing can be, it's helpful to consider how much a current homeowner could possibly save.

A 30-year fixed-rate loan had an average interest rate of 3.66% in the week ending Nov. 21, 2019, according to Freddie Mac. Let's say a borrower took out a 30-year loan to buy a home last year at the average rate, and now owes $291,000 on that loan (that's the average loan balance for refinance loans last week, according to MBA). If that borrower refinances to a new 30-year fixed-rate loan at today's average refinance rate of 2.907%, that results in savings of $121 per month and $20,732 in total over the course of the loan repayment period (not taking into account any refinance costs). That's a lot of money.

The MBA data also indicates that last week's average balance of $291,000 for refinance loans was lower than in recent weeks. That suggests that homeowners with higher loan balances -- and more potential savings to realize -- may have already secured refinance loans.

If you haven't yet explored refinancing, you may want to join the many Americans applying for a new home loan at today's record low rates. You may find there's a reason there's twice as much interest in refinancing -- and that you could save a lot of money each month and over time. It's certainly worth shopping around with the best mortgage refinance lenders and looking into your options.