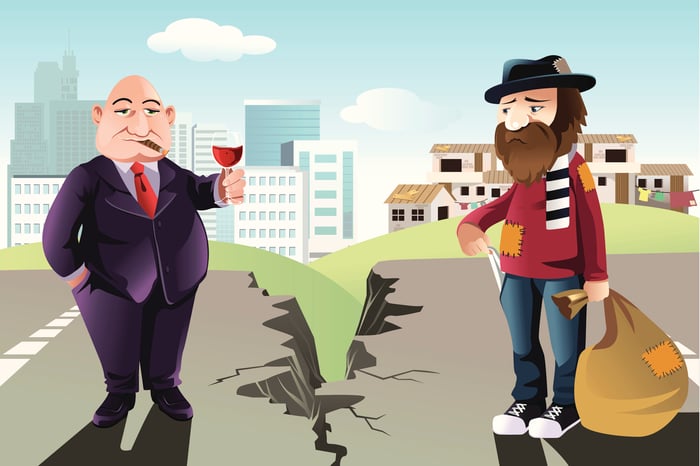 Over the next five months, our nation's political candidates will debate how to improve the economy, strengthen our standing in the world, and tackle difficult social issues. Although it has yet to garner the type of attention it deserves, Social Security will have its time in the limelight as well.

The system's faults are well known by now. As the ratio of working Americans to retiring baby boomers shrinks, payroll tax revenue will no longer be able to fund Social Security benefits at their current levels. If nothing is done to fix the system -- for example, cutting benefits or raising taxes -- then benefits will have to be reduced by as much as 25% in the mid-2030s.

Given this outlook, it's worth asking: What would happen if Social Security were dismantled? Of course, the chances that this will happen are so low as to be negligible. But by investigating the potential consequences, we can get an idea for how important and impactful the program really is.

What would be the direct effects of ending Social Security?

We human beings are notoriously terrible at making accurate predictions of the future. Even when we can predict the immediate effects of a given event, we are often helpless to foresee the second-order effects, i.e., the consequences of the consequences. So for the sake of simplicity, let's start by considering how different groups of Americans would be immediately, directly affected if Social Security were completely dissolved overnight (an inconceivable scenario).

Americans aged 65 and older
Social Security provides the majority of income for those over age 65. The effects on this group would be far-reaching.

The Center on Budget and Policy Priorities in 2013 said 9.1% of all Americans 65 and older lived in poverty. If the money from Social Security were backed out, the poverty rate would almost quintuple to 44.4%. Missouri, Oregon, and New Hampshire would see the number of impoverished senior citizens increase sevenfold. The number of retirees living below the poverty line in Wisconsin and Iowa would jump eightfold.

That said, the most impoverished areas would remain in the Deep South. To see how your state would fare, hover over it.

Workers
Because FICA taxes take an automatic 6.2% cut of the average American's monthly paycheck, those who are working would see an immediate boost to their income. For instance, a family earning $52,000 -- roughly the national median -- would get an extra $3,224 to spend annually.

Businesses
The other half of the FICA tax is paid by employers. This, too, represents 6.2% of wages. Companies would immediately see their tax rate fall, which means that the leftover money would immediately fall to their bottom lines.

The federal government
Currently, the two trust funds that help provide Social Security benefits have $2.8 trillion. If that money were immediately freed up, it could serve a number of purposes. To put it in context, the U.S. national debt is roughly $19.5 trillion. Ostensibly, about 15% of it could be wiped out immediately.

More importantly: What are the second-order effects of ending Social Security?

Here things get trickier, because it's difficult to predict how people and markets will respond to different events. But here are some examples of the potential knock-on effects of a Social Security dissolution.

Americans aged 65 and older
Presumably, many seniors would be forced to liquidate their retirement savings. This alone could create a serious drag on stocks and bonds, as billions would move out of the market.

Industries that rely on discretionary spending by senior citizens -- RVs would be a good example -- could see their business shrivel up.

Workers
Spend or save? That's the big question. If today's workers decided to spend the bulk of their 6.2% windfall, it could have immediate positive effects on the economy. At the same time, it would set them up for disaster in the future, as their primary financial safety net would no longer be there.

If they decided primarily to save their money, it could be a boon for the stock market -- at least helping to offset the withdrawal of money by boomers. Americans' abysmal saving and investing habits would suggest that the likelihood of this is low.

Businesses
Companies, meanwhile, would suddenly face an interesting question: how to spend the extra cash that just appeared. Should it be passed along to employees? Should it be reinvested in the business? Maybe it should simply be paid out to shareholders.

As you might expect, each of these decisions would have profound ripple effects through the rest of the economy.

The federal government
There's a tricky thing about sudden influxes of money into the government's coffers: An all-out war usually ensues when we have to decide how to use it. Offer a tax rebate? Pay down debt? The options are endless, and so are the headaches. This might be the toughest second-order effect to fathom.

What's the point of even considering the end of Social Security?

At its core, this is simply a thought experiment. Social Security is not -- I repeat, not -- going away any time in the foreseeable future. But there are two key takeaways: Social Security is a massively influential program, and any major changes to it could create serious short-term chaos for everyday Americans.

That's why any changes we see are likely to be spread out over years -- or even decades. It's important to stay abreast of what changes might come. But at the end of the day, you need to take as much control over your retirement funding as possible. After all, no one cares about it more than you!

What Would Happen if Social Security Were Dismantled? @themotleyfool #stocks Next Article
Current