Debt is a fact of life for most of us. Whether it's student debt, credit card debt, home loans, car loans, or money you owe a friend, all kinds of debt hang over our heads, clouding our financial futures. Make 2019 the year you resolve to start getting out of debt.

You're not alone. In fact, America's total debt tops $21 trillion, and in fiscal 2018, we paid some $325 billion to service our national debts. If you don't like the sound of that, there's not much you can do beyond letting your representatives know. But America also has roughly $4 trillion in consumer debt -- debt we can do something about. Fortunately, you can get out of debt, and we'll take a look at these seven steps to take in designing your strategy:

How much debt do most people have?

Before we get down to business, understand that you're not alone in carrying debt -- and perhaps your debt load is even below average. The table below offers a snapshot of various age cohorts' financial health, according to  Experian:

Data source: Experian, State of Credit: 2017 report.
*Age ranges for each generation vary a bit, depending on the source. This table uses the Pew Research Center as its source.

Why do I need to get out of debt?

You can probably think of your own reasons for wanting to escape debt, but in case you need more motivation to spur action, here are more:

One of best ways to come to believe you can dig yourself out of even massive amounts of debt is to learn that plenty of others have done just that -- without resorting to extreme measures such as declaring bankruptcy.

Many people before you have successfully paid off more than $100,000 of debt. It takes determination and discipline, and it can take significant time, too, but it can be done -- and within a year or two, you might be free of your non-mortgage debt and starting to work on achieving other financial goals.

Where do I start with getting out of debt?

You must first assess your financial position and find your net worth. You're probably aware of owing a hefty balance on this card and that card, or owing several thousand on a car loan, too, but you may not have totaled all your debt to see exactly where you stand.

Grab a paper and pencil and list all your debts, including your balance owed, your monthly payments, and the interest rates you're being charged for each debt. Some of your debt, such as a low-interest-rate mortgage, isn't necessarily problematic.

While you're at it, add up all your assets, too -- including your cash in the bank, home equity, investments, and so on. Subtracting your debts from your assets will leave you with your net worth, which may or may not be a positive number. Don't fret, as this is only where you're starting your journey out of debt. 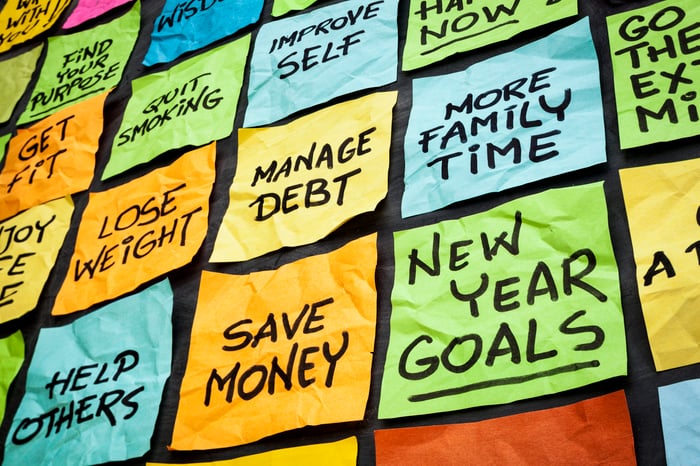 Knowing how much you owe and what your net worth is can help you formulate some debt-reduction goals. For best results, be specific.

Imagine, for example, that you have $20,000 in credit card debt and $10,000 in other non-mortgage debt. You might set yourself a goal of paying it all off in two years. (Set a specific time frame, too, lest you keep extending your deadline.) You can set sub-goals, too, such as having a quarter of it and half of it paid off by certain dates. Write down the goals and post them where you'll see them.

It can also be motivating to set one or more goals for increasing your credit score, because your score is likely to rise as you pay down debt. More on that in the next section.

You may want to set net worth goals, too. Getting to a positive net worth might be an initial goal, and you might also set a series of savings goals for arriving at what you need for retirement. First, though, you'll need to have your debt under control -- and, ideally, wiped out. Keep these goals handy and regularly reflect on them to assess whether you're making progress, and what behaviors are hindering your success.

Your credit score is based on information in your credit report, and it plays a very influential role in your financial life. A great score can get you the lowest interest rates for loans such as mortgages, and a poor score can cost you tens of thousands of dollars in extra interest paid because of a high interest rate.

The following table shows the importance of a strong credit score, using homebuying as an example. It reflects someone borrowing $200,000 with a 30-year fixed-rate mortgage and reveals that the difference between a good credit score and a bad one can be $100 to $200 per month and tens of thousands of dollars in interest paid.

Many credit cards let you see your credit score online, and it can be helpful to be able to track it over time if you're working on paying off debt, as it will probably rise -- especially if you're paying bills on time, too. Here are the components of the widely used FICO score:

It's also smart to get copies of your credit reports regularly, too, and to check them for errors. By law, we're all entitled to a free copy of your credit report annually from each of the three main credit agencies -- visit AnnualCreditReport.com to order yours. Fixing errors is one of many ways to increase your credit score.

For best results when getting out of debt, you'll want to use one or more smart strategies, and to stick with them in a disciplined manner. Making extra payments against your principal without a plan is not an effective way to reduce debt and will probably draw the repayment process out for a long time. 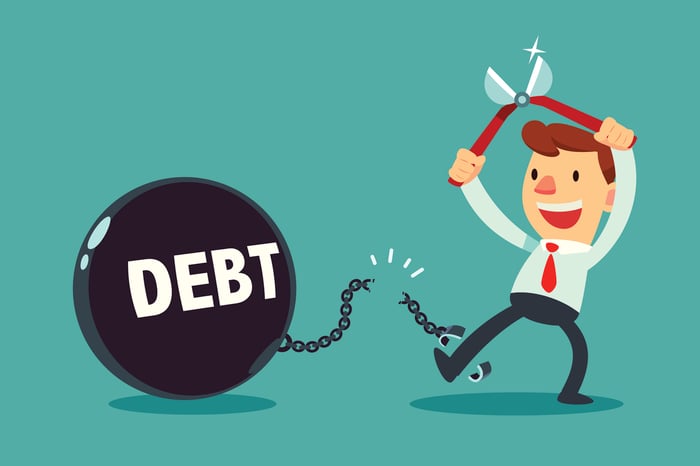 Consider these seven strategies and see which ones could work for you:

This is an easy way to make the debt repayment process less painful if you're able to do it: Reduce your interest rates. Changing the interest rate on your mortgage requires refinancing -- but it might be worth looking into. One rule of thumb suggests that it's worth it if the interest rate you're likely to get is a percentage point lower than the one you have.

One issue many people with multiple debts face is deciding which debts to pay off first. There are two opposing schools of thought on the topic. One is the "snowball" approach, where you pay off your smallest debt first, so that you feel a sense of momentum building.

If, for example, you have a car loan and debt on five different credit cards, you might be able to quickly pay off two of the cards, leaving you with only four accounts to pay down instead of six. That can make it seem as if you're really making progress, and can be encouraging.

The other approach is more efficient, though: Paying off your highest-interest-rate debts first. Remember that you compiled a list of your debts and their interest rates. Well, the ones with the highest rates are costing you the most, over time. So to minimize your interest expense, you should pay off a debt carrying a 21% interest rate before you tackle a debt with a 12% interest rate.

Another strategy can have you bypassing the decision about which debts to pay off first by consolidating your debts. Depending on your debts, you may not be able to fold all debts into one, but you might bundle all your credit card debt onto one card, while consolidating various student loans into one.

When it comes to student loan debt, you might consolidate federal student loans into one loan through the Department of Education's Direct Consolidation Loans. Also, or alternatively, you might take out a private loan to consolidate debts -- that's generally referred to as refinancing student loan debt. The advantages of consolidating can include lower monthly payments (if you extend your payment period) and getting out of default, while drawbacks can include less flexibility and a longer payback period -- which can mean more interest paid, overall.

Balance-transfer cards can help when trying to pay off credit card debt, because you can transfer thousands of dollars owed to a new card that offers a very low initial interest rate -- often 0%. That interest rate will be in effect for between six and 21 months, after which a more standard interest rate will apply. That standard rate will not necessarily be a great one, so you should seek cards that will charge you relatively low interest rate ranges following your teaser-rate period. Your credit score is likely to influence the interest rate you're given after the 0% rate expires, so this is another reason to get your score as high as you can.

Aim to pay off your debt on your balance transfer card before the teaser rate ends -- and if you don't think you can, perhaps opt for a low-interest-rate card instead.

Look into the fine print of any balance-transfer card you're considering to find out what your credit limit will be with the card. Many times, you won't be able to know until you get approved for the card. You won't be able to transfer more than that limit, less the balance transfer fee, if there is one, and if you exceed the limit you might face a fee.

Find out if there's a penalty APR, too. That's when the card company jacks your interest rate up to 25% or even 30% if you pay a bill late or commit some other transgression. Many cards don't feature them, and that's preferable. Remember that any time you apply for a new credit card, even for a balance transfer, your credit score may be affected negatively as a result.

This is a common-sense strategy -- simply spending less while earning more. 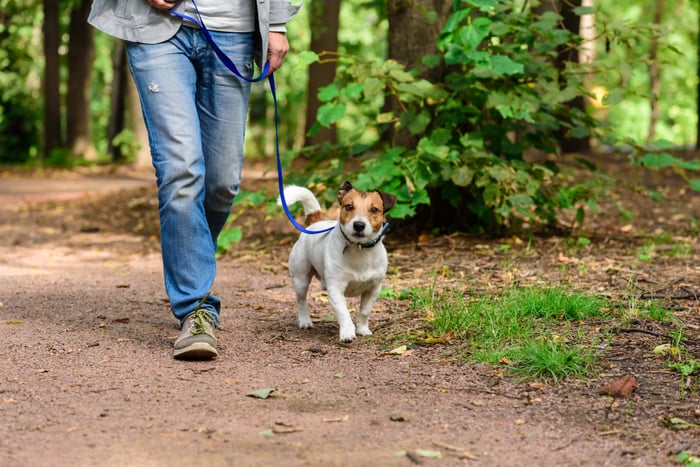 Dog walking is a lucrative side hustle you can do on your weekends. Image source: Getty Images.

Here are ways to bring in more money:

The last strategy for getting out of debt is to simply avoid making more regrettable moves. Don't dig the hole you're in any deeper!

One common pitfall: Don't ever sign up for a card with dreaded "penalty APR" feature that can jack your interest rate up to 25% or 30%.

Another obstacle that trip up so many is thinking you'll make progress on debt repayment by making your minimum payments. Yes, it minimizes inconvenience and will seem easier than other strategies, but it's costly. Imagine, for example, you owe $20,000 on your credit card(s) and that you're being charged a 25% interest rate. If your minimum payments are 3% of your balance, you'll be starting out paying a whopping $600 per month, meaning you'll have to come up with $150 per week. If you can't, your balance will be growing, digging you deeper in debt. In that situation, it can take more than 30 years to pay the debt off, with your total payments exceeding $63,000 -- all for a $20,000 balance owed.

The thought of paying off significant debt can be daunting, but don't get too discouraged. It can definitely be done and several years down the line, you'll be breathing easier and sleeping better while you watch your retirement savings grow.