On June 10, 1963, the Equal Pay Act was signed into law. This act amended the Fair Labor Standards Act to prohibit wage discrimination on the basis of sex.

More than a half-century later, women still earn less than men. This is true across the United States, and it's true even -- and perhaps especially -- among educated women.

The persistent gender pay gap affects every aspect of women’s finances, from poverty rates to retirement security. These shocking statistics show just how far women continue to fall behind their male counterparts, even in the #MeToo era where light is being shed on unequal and inappropriate treatment of women in the workplace.

Only by understanding this disparity can we start to change it.

The gender pay gap over time

The gender pay gap isn't a new phenomenon in the United States. In fact, median weekly earnings dating back to 1979 show disparities among working men and women ages 16 and over.

There has undoubtedly been an improvement -- women’s median earnings were 62% of men's median earnings in 1979 compared with 81% in 2018. But the wage gap has been slow to close and progress has virtually stalled for the past 13 years.

Women have yet to earn more than 83% of the median earnings of their male counterparts, despite the passage of laws such as the Lilly Ledbetter Fair Pay Act of 2009. This act strengthened existing fair pay laws by making it easier for women to take legal action in cases of gender inequality in the workplace.

The gender pay gap by state

The gender pay gap, unfortunately, isn’t a red or blue state problem. Nor is it a problem isolated to certain geographic areas. There's a pay gap in every state in the U.S. as well as the District of Columbia. The only place where women earn more than men is in Puerto Rico.

The data below shows just how much less women earn than men all across the country. It’s based on median earnings of men and women in 2017 among all workers aged 25 and older.

Unfortunately, an increase in education has not closed the gender pay gap. The table below shows the wage gap at different levels of educational attainment. The data is based on median earnings in 2017 of men and women aged 25 and older. 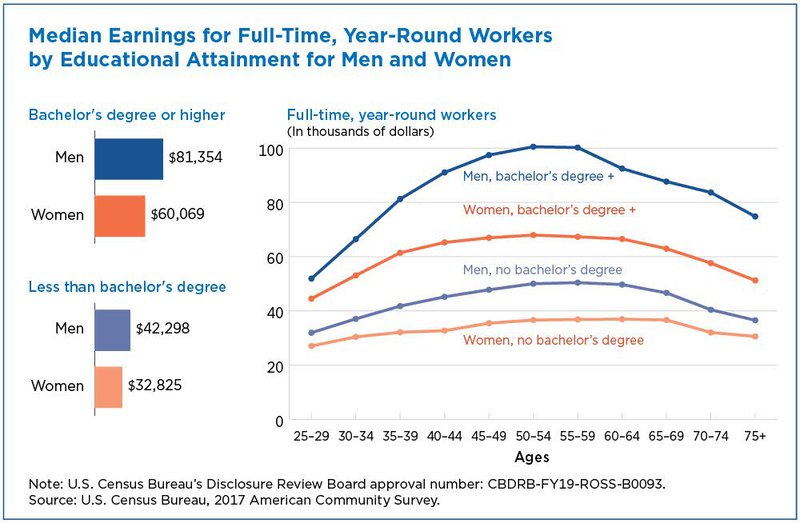 One possible reason that education results in a larger wage disparity is that women with bachelor’s degrees are younger than men on average. This means they've had less time in the workforce to raise their salaries and develop relevant experience that boosts earnings.

A common explanation for the gender pay gap is that women earn less than men because they devote more time to raising children. However, data from the Bureau of Labor Statistics reveals that a gender pay gap exists regardless of family status.

Admittedly, the gap is smaller when comparing men and women who are unmarried or with no spouse present and no children under 18. But it doesn't disappear entirely.

The gender pay gap has a profound impact on women. Wage disparities likely contribute to the following facts:

The gender pay gap is likely a major contributing factor to higher rates of female poverty across all age groups. Poverty levels are especially high among female-headed households.

The Institute for Women’s Policy Research estimates poverty rates among all working women would be cut in half if the gender pay gap was eliminated. In fact, they would fall by more than half in 36 states.

Women are also more likely to work part-time jobs that don't provide access to retirement savings. They're also more likely to take time off of work to take care of family members. The fact that they live, on average, three years longer than men doesn't help, either. Fewer savings plus more years spending those savings mean women face a tough time in retirement.

The gender gap doesn’t just exist in the United States. The World Economic Forum warns that no country has achieved gender parity and that women still face serious disadvantages across the globe when it comes to both political empowerment and economic opportunity.

Too often, women are blamed for the gender pay gap, with some people arguing that women's choices -- such as having children or failing to negotiate raises -- are the cause of their lower incomes. However, the data belies these assertions, including statistics from a recent study showing that women often ask for raises but are less likely to receive them.

True change will come only when the public, private, and social sectors join forces to make women’s equality a priority. Change is worth the effort, not just to help women, but to help the world’s economy as a whole. In fact, the McKinsey Global Institute found that advancing women’s equality could add as much as $12 trillion to the global gross domestic product by 2025.

Women have much to contribute, and the time has come to make the changes necessary to reward them equally for their efforts.

Study: The Psychological Cost of Debt

Study: The Financial Timeline of Relationships

Study: The Psychological Cost of Debt

Study: The Financial Timeline of Relationships