Please ensure Javascript is enabled for purposes of website accessibility
Log In Help Join The Motley Fool
Free Article Join Over 1 Million Premium Members And Get More In-Depth Stock Guidance and Research
By Maurie Backman - Dec 5, 2017 at 9:47AM

How many of these are you guilty of?

No matter how many hours you work each day, your goal should be to make the most of that time. Unfortunately, the majority of U.S. employees aren't maximizing that opportunity. According to data from Salary.com:

And those are some pretty telling numbers, especially in this day and age, when productivity tends to influence promotions and raises more so than mere seniority.

If you're serious about advancing your career, then it's pivotal that you stop getting distracted and start getting focused. Here are just a few things that are probably eating up way more of your time than they should be. 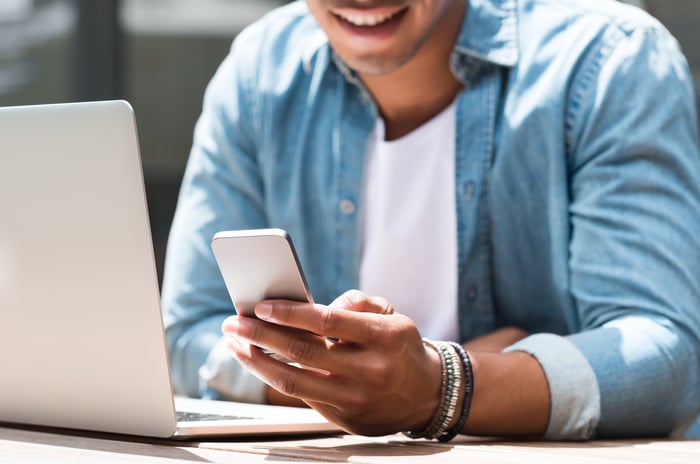 Email is a part of life, both on the job and outside of work. But if you're like most Americans, you're spending far too much time reviewing your inbox and replying to messages. It's estimated that the average worker wastes 17 hours per week on useless work emails. If you tend to follow a 40-hours-a-week schedule, that's practically half of your workweek.

A better approach? Set up filters to flag incoming messages as important, and only stop to respond to those that are truly urgent when you're busy with other tasks. Then, set aside a couple of hours each week to deal with your remaining messages. If you're like most workers, you can't afford to waste any amount of time on emails, let alone 17 hours a week, so while you can't ignore messages from your boss, you can be more judicious with nonpressing matters.

There's no question that cellphones make it easy to communicate. The problem, however, is that most of us have a hard time putting them aside and focusing on work tasks instead. According to CareerBuilder, 55% of employers point to cellphone usage as the single greatest productivity zapper their workers encounter.

To avoid falling victim to this trap, give your family members and closest friends a landline to reach you on at the office, and keep your cellphone tucked away on silent. This will also prevent you from responding to the dozens of text messages you might get in a single day's time. Another option? Assign ringtones to those most important to you, and only pick up your phone if one of them sounds. The less distracted you are by your phone, the better a job you'll do.

If you work in a corporate environment, there's pretty much no such thing as avoiding meetings entirely. But if you're not careful, those constant conference room gatherings could wreak havoc on your schedule.

Rather than spend hours each week attending meetings for no good reason, be more selective about the ones you say yes to. If you're not sure why you're being asked to a meeting, request that the organizer provide an explanation. Furthermore, don't hesitate to (politely) approach your boss and ask that your regular team meetings or one-on-ones be scaled back. While there is a value to face time, there comes a point when too many meetings can prevent you from doing the work you were actually hired to do.

4. Chatting with your officemates

It's nice to have a good relationship with coworkers, and there's nothing wrong with saying hello or asking one or two people around you about their weekend plans. But if you find that you're constantly having conversations with colleagues on the fly, it's time to start cutting back -- because believe it or not, those three-minute chitchat sessions can amount to a giant waste of time.

Here's one way to keep yourself in check: Stick a Post-it note on your desk and mark down every time you wind up conversing with someone about nonwork matters. Once you reach a certain threshold in a given day (say, eight times), cut yourself off from casual communication.

Another option? Lock yourself in a conference room for several hours at a time to avoid the temptation to gab. This is an especially wise move when you're up against a deadline or can't afford to have your concentration broken.

The more productive you are on the job, the more security you'll buy yourself. So don't fall victim to these time-wasting traps. Avoid the above-mentioned mistakes, and with any luck, you'll be lauded for your output and dedication.