Since the Great Recession that began in 2008, Americans have built up a worrying amount of debt. According to a recent Federal Reserve Bank report, household debt balances in the fourth quarter of 2016 reached $12.58 trillion, just 0.8% below the peak debt load in the third quarter of 2008.

It's wise to consider how much your household is contributing to those numbers. While adjusting your own household's debt load is not likely to have a significant impact on whether or not a recession occurs, it can certainly make it easier for you to weather such a recession without going under. Even if there isn't another recession, having an excessive amount of debt is an enormous drain on your financial resources and can make your goals unattainable. 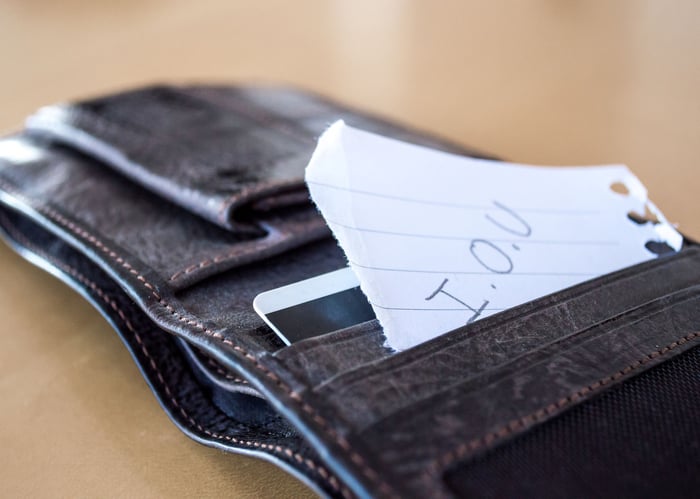 The good news that stands out when reviewing these numbers is that over three-quarters of the debt load is "good" debt, meaning it's debt that was used to finance something that will increase in value over time. Mortgages and student loans are widely considered good debt because your house will very likely net you a profit when you sell it, and your education will allow you to earn a higher income over your lifetime.

The bad news is that even good debt can be a problem if you have more of it than you can afford to pay. Buying a house is no longer a good investment if you're forced into bankruptcy and lose the house because you can't pay for it. Excessive mortgage debt was arguably the most significant factor in causing the 2008 recession; when a large enough percentage of households couldn't afford to keep up the mortgage payments anymore, the banks financing those mortgages crumbled and the economy crumbled with them.

So when does debt cross the line and become too much? It's tough to assign a specific percentage because it depends heavily on your own situation: how much your income is, how much money you're devoting to non-debt expenses, and how your prospects look for the near future. Someone heading for a promotion and raise could potentially handle a much higher percentage of debt than someone heading for a layoff, for example.

In her book All Your Worth, Senator Elizabeth Warren suggests a 50/30/20 budget: 50% of your income toward necessities, 30% toward things you want but don't need, and 20% toward saving money and paying down debt. Ideally, you'll want to squeeze your debt load into that 20% category; if you do so, you likely will be able to keep it under control over time. If your debt grows to the point where you can no longer keep it in the 20% category, you'll have to set aside some of your 30% "wants" budget for extra payments to reduce your total debt.

Obviously, figuring out the percentage of debt you now enjoy requires you to sit down and add up all your debt and income. Yes, this is tedious and possibly traumatic, but it's the first step toward getting your debt under control instead of letting it control you. And you may even be pleasantly surprised to discover that you have less debt than you realized. Once you've added up your debt, you can then figure out how much you need to pay each month to keep it at a level you're comfortable with, and still have a little money to put in savings. Speaking of which...

At the very least, you'll want enough money in your emergency savings account to cover three months' worth of expenses; many experts recommend saving enough money for six months to a year or even more, in extreme cases. This is another number that will fluctuate based on your personal situation. If you're single with no dependents, successfully employed, and don't have a lot of expenses, you can get by with a relatively small emergency savings account; on the other hand, someone with an iffy job situation and several kids or other dependents will want to have a lot more than three months' worth of expenses saved up.

The final factor in deciding if your debt load is too high is whether or not you feel comfortable with your current financial situation. Do you feel financially secure? Or do you count the days toward your next paycheck and fret whether there will be enough money to pay for everything? Are you able to regularly set aside money for savings, including retirement savings? The answers to these questions will tell you if you've overextended on debt. And when it comes to balancing your own household budget, your personal preferences should be the deciding factor.