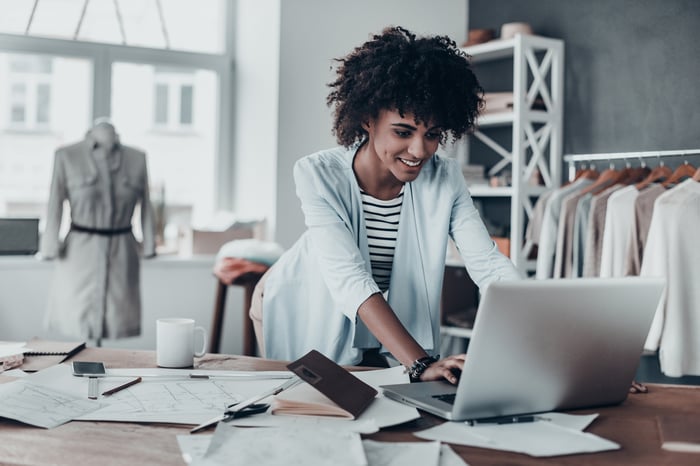 Many small business owners rely upon credit card debt for various capital needs, whether to gather funds to establish a business, or to fund working capital and other ongoing needs, once up and running. No doubt many entrepreneurs have dug themselves into inescapable holes by using credit card debt the wrong way, but the reality is, there are times when using credit card debt can be a savvy move, particularly when choosing the right small-business credit card.

In the following video segment, The Motley Fool analysts Michael Douglass and Nathan Hamilton discuss one time when it could be smart for small-business owners to carry credit card debt to defray the costs of running a business.

Michael Douglass: All right, so, Hamilton, let's talk about business start up costs. And they are pretty massive. The average cost of starting up a business is $29,000. A lot of money. And then of course, if it's like a restaurant or something with a lot of inventory, it can be far higher.

And perhaps surprisingly, there are actually some options with credit cards that can kind of help with this?

Nathan Hamilton: Yeah, I mean. Credit cards are something to consider as part of a broader capital plan. I shouldn't say this, but in no instance could I see that credit cards would make sense for your total capital plan. Maybe there are some instances out there, but it should be a portion of what you're using, whether it's a line of credit and so forth.

Douglass: Well, and frankly, if you have that amount of buying power, across the board, you probably have a much better option than a credit card. But credit cards can make sense for a small trench of it. In certain circumstances.

Hamilton: Yeah, absolutely, because if you look at it. Money's tight when you're starting up a company, of course. You've got a shoestring budget, but there are cards on the market where you can incur debt and it actually would make sense. As, for a 0% intro APR offer, there are some business credit cards out there that are 12 months, perhaps even longer, where you can go and make your purchases and not have to pay any interest on those balances, for say 12 billing cycles or 12 months.

So that is, if you look at it in the broad scheme of things, that is a huge advantage to your business if money is tight. Now, of course, you've got to budget right, because once that promo period expires, boom, you're hit with sky high interest charges and that's where it doesn't make sense necessarily. So it's definitely something that you want to look at it and budget and say, "What can I afford over that promo period that makes sense?"

Douglass: Well, and it's sort of like when you think about, we're investors first, so when you're thinking about, when you look at business and they're issuing bond debt and paying down debt, these Fortune 500 companies. Usually, they sort of take a look at their debt load, when they've got some spare cash, and they say, "What's the highest interest debt? Let's pay it off first."

With something like this, maybe zero interest in the short term, it's high interest in the long term, so naturally it's probably the first thing you're paying off once you have some more cash flow coming in.

Hamilton: Yeah, absolutely. And what to expect, if you're looking at a card like that, or if you're considering taking on credit card debt for a business is, you can't expect similar offers without an annual fee. Generally, like I said, 12 months or so is somewhat common. You can get longer offers. It depends upon the card. But it is something to consider. And even on top of that, most cardholders should expect some sign-up bonus or ongoing rewards and it's your choice, if you want to funnel that money back into the business, or to pay off that loan, essentially that you've taken over that promo period.

Douglass: Yeah, absolutely. You know here at Fool.com, we've got a lot of information about credit cards and about small businesses, so check us out, Fool.com/creditcards, and you can get a lot more useful information, both from personal and on business there. Hamilton, thanks much.