Get the pros and cons so you can make an informed, financially savvy decision. 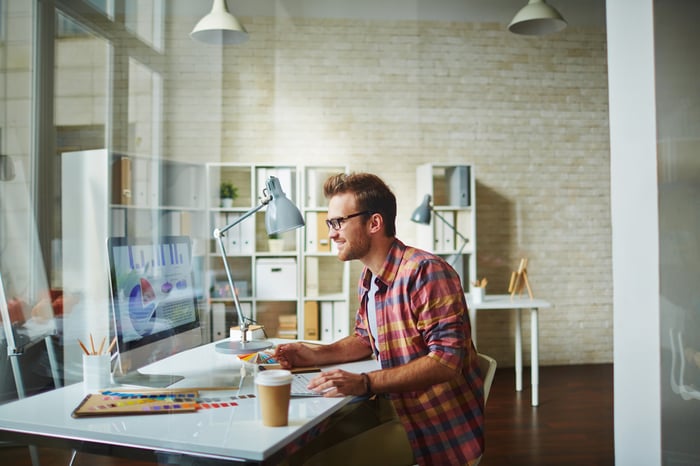 Small-business owners have several funding options to consider when starting up operations, each with its advantages and drawbacks when it comes to upfront fees, interest rates, and uses. Two common sources of funds are credit cards (check out our picks of the best small-business credit cards for our favorites) and a business line of credit. But which is a better option?

In the video segment below, The Motley Fool analysts Michael Douglass and Nathan Hamilton discuss four questions small-business owners should ask themselves to decide which solution may be the best for their capital needs.

Michael Douglass: So, let's talk about business credit cards and lines of credit.

Douglass: And when it generally speaking, makes sense to use each. So first off, what is a line of credit? We'll start with that.

Douglass: Right. Okay. So that's a helpful decision to make. Let's talk through, there's kind of like four questions to really think through which makes sense. The first one is how quickly you plan to pay off the balance? This makes total sense because with a credit card, you might have the option of like a 0% APR and so you might get, let's say up to 12 months to kind of pay it off in full before incurring any interest, at that point it may make sense to take the essentially free debt if you can pay that off quickly as opposed to incurring interest charges on a line of credit.

Hamilton: Yeah and also a counterpoint to that is the interest rates that you're going to be charged on a line of credit are in almost every instance going to be lower than what you would incur on a credit card.

Douglass: This ties in, actually to sort of the second question you need to ask yourself, which is well, how much money am I looking to borrow?

Douglass: Right? If you're trying to borrow $100,000 obviously it takes a lot longer to pay that off than say, five grand and lines of credit tend to have much higher debt limits that you can take on.

Hamilton: Yeah, the underwriting process for a line of credit is going to be in further depth than what you're going to get with a credit application. They're gonna ask for your basic details and you'll have approval decisions almost instantaneously.

Douglass: Technically you can get cash either way, right?

Douglass: It's just with a line of credit it's so much cheaper to get the cash that way.

Hamilton: Yeah, with a line of credit you're, as your credit line sits stagnant you're going to incur a small percentage fee, non usage fee, essentially but you can access cash without any transaction charge, you start incurring interest on it.

Hamilton: With a credit card, conversely how it's different is you can access cash, you can go to an ATM and use it to withdraw cash but you're going to be incurring at a very high interest rate plus the kicker is, you've got a transaction fee for every withdraw and many times this is about three percent of the transaction. If you have a high limit and say you had $100,000 limit, this very well may not be the case with many business cards at all but three percent on top of that, you're paying $3,000 if you were to withdraw 100,000 from an ATM but that may not be possible.

Douglass: Yeah, I would actually be curious to see if anyone has actually ever tried to withdraw $100,000.

Douglass: That would be-

Hamilton: Yeah and that kind of focuses on what sort of expenses you'll be paying for with them. If it's working capital or paying a supplier and they're able to accept credit, might as well earn rewards on it. If you have a restaurant and you need to essentially go out to the store to buy, the grocery store to buy some ingredients or produce in a time of need, you're going to earn rewards on it and so forth. Advertising, travel, you don't get that with a line of credit so it is something just important to budget for and to keep in mind whether you're choosing between a line of credit or a credit card or even using them together, which many people do.

Douglass: Yeah, absolutely. And of course, when speaking about individual credit card purchases, always what you want to do is avoid any interest you can.

Douglass: If you're outside the promo period, that's paying it off within that month. If you're within a promo period, obviously you know, you have a little bit more time but you still want to pay it off before interest starts racking up and that may be 12 months later or so. Again, to paying your card. We've got a lot more information about business credit cards and thinking through how to approach thorny questions like these at fool.com/businesscreditcards So, head on over there and we'll hope to see you there.