Please ensure Javascript is enabled for purposes of website accessibility
Log In Help Join The Motley Fool
Free Article Join Over 1 Million Premium Members And Get More In-Depth Stock Guidance and Research
By Maurie Backman - Jan 14, 2018 at 6:48AM

Most Americans have no idea when they'll get out of debt, or fear they never will. Talk about bleak.

Americans certainly don't tend to shy away from debt. In fact, credit card debt reached an all-time high in the U.S. last year, with the average household on the hook for somewhere in the ballpark of $16,000. But a new survey by CreditCards.com reveals even more depressing news: A good 68% of U.S. adults either have no idea when they'll manage to shake their debt, or don't think they'll ever be debt free.

Not surprisingly, older Americans have the least positive outlook with regard to debt. While 65% of millennials aged 18 to 36 don't know when they'll pay off their debt or worry they never will, that percentage jumps to 70% among baby boomers aged 53 to 71, and 83% among those 72 and over. All told, an alarming 31 million Americans with credit card debt expect to take it with them to the grave. 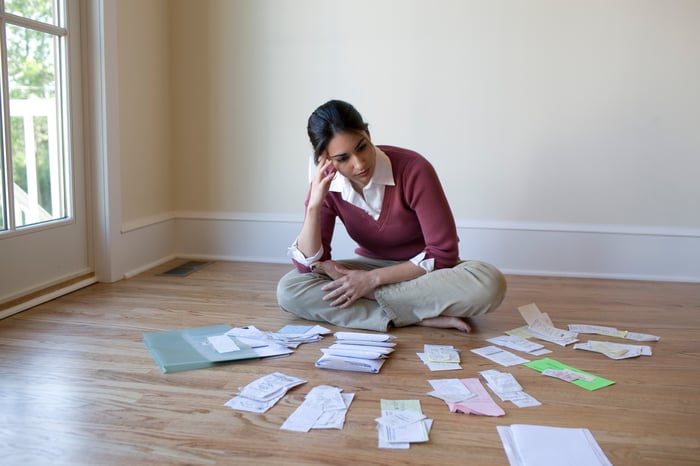 If you're saddled with debt, you should know that you do have options for paying it off, and in a more reasonable time frame than you may have thought. You just need the right strategy and a willingness to make some changes in your financial habits.

Why are so many of us in debt?

So how did we get here, anyway? It's simple: Americans have a tendency to live paycheck to paycheck without any form of near-term savings. Case in point: An estimated 59% of U.S. adults have less than $1,000 in the bank, while 39% have no savings at all. So what happens when someone with no savings gets hit with an unplanned expense? That's right -- the credit cards come out.

Of course, the problem with not paying a credit card bill in full is that the moment you begin carrying that balance, you start accruing interest. That interest then compounds daily so that you're racking up more interest on top of that interest, thus fueling a vicious cycle that's seemingly impossible to halt. And that explains why so many Americans are doubtful about their ability to ever shake their debt.

If you'd rather not be a part of the dire statistics above, then here's some good news: You can get out of credit card debt if you're willing to change the way you manage and spend your money. For one thing, you'll need to start following a budget if you want a shot at being debt free. This way, you'll get a better sense of where your money is going.

Creating a budget is easy. Just list your various monthly expenses, throw in those one-time bills that creep up during the year, and compare your total to what you bring home in your paychecks. If there's no room left over for savings, you'll need to then review your various bills and decide which ones you're going to cut. You might choose to downsize your living space, stop eating out, or sell your car and take the bus to free up more cash in your budget. But you will have to do something if you're serious about shaking that debt.

Another option? Get a secondary gig on top of your primary job. It doesn't need to be something you do nightly, or even weekly, but if you're willing to swing a side hustle, you'll have that much more cash to apply to your debt.

Once you manage to come up with more cash on a monthly basis, you'll need a solid plan of attack for paying off your debt. So here's what you're going to do: Take a look at your various credit cards, see which ones are charging the most interest, and work on paying those off first, since they're costing you the most.

Finally, if your credit is good despite your debt, you can look into a balance transfer offer. If you transfer your existing balances onto a single card with a lower interest rate, you'll not only spend less to pay off your debt, but have an easier time managing it.

While your personal level of debt might seem insurmountable, the fact of that matter is that you can pay it off once and for all. It's a far better bet than carrying that burden into retirement -- and beyond.