Please ensure Javascript is enabled for purposes of website accessibility
Log In Help Join The Motley Fool
Free Article Join Over 1 Million Premium Members And Get More In-Depth Stock Guidance and Research
By Dan Caplinger - May 21, 2018 at 12:00PM

Find out how budget flexibility could be a thing of the past.

The national debt has been a contentious issue among politicians and economists for years, and its growth has shown no signs of slowing. The size of the national debt has nearly quadrupled over the past 20 years, climbing above the $20 trillion mark as of the end of the government's 2017 fiscal year and moving inexorably higher.

Ordinarily, you'd think that such a massive increase in debt would have had dire budgetary consequences. After all, if the amount of debt you have outstanding on personal loans were to multiply fourfold, you'd probably be in big trouble trying to cover the higher interest payments from your regular income.

Yet as you can see below, that problem hasn't materialized for the U.S. government. Even with the amount of debt rising so much, annual interest payments on that debt have gone up by a much smaller amount -- just over 25% since 1998. 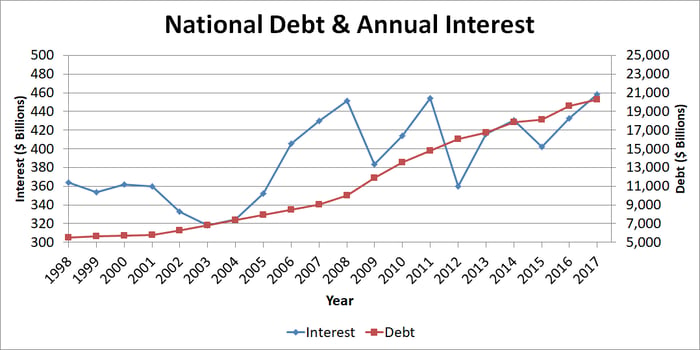 How has this happened? Rock-bottom interest rates in recent years have effectively allowed the U.S. government to refinance its outstanding debt with much lower annual interest costs. For instance, in January 2000, the average interest rate on the U.S. Treasury's total interest-bearing debt was more than 6.5%. By December 2016, that figure had fallen to below 2.25%. A two-thirds drop in effective interest rates was necessary to avoid a disastrous rise in interest payments.

Recently, though, those rates have started to climb higher. The move thus far hasn't been big, with current levels still below 2.4% as of April. However, if interest rates continue to go up, the much bigger national debt will dramatically boost the amount of money needed to pay annual interest. That could take money away from other valuable government services, creating a potential budget crisis that would be bad news for the government, as well as the entire American population.