What: Shares of both Williams Companies (NYSE:WMB) and Energy Transfer Equity (NYSE:ET) climbed 20% and 12.7%, respectively, in May. The reason for the optimism about the two stocks was that it appears the proposed merger between the two companies will happen -- which benefits Williams -- and that the companies appear to be amenable to renegotiating the terms of the deal -- which helps Energy Transfer. 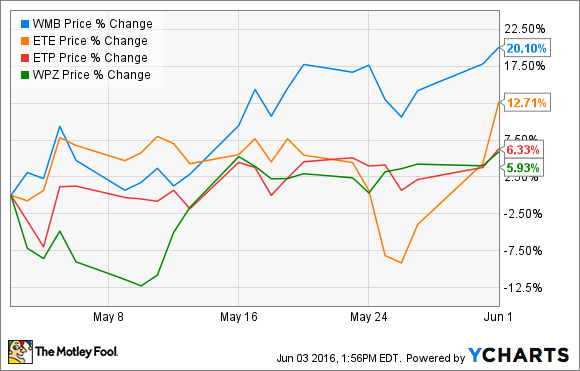 So what: The proposed merger between Williams and Energy Transfer was one of the uglier engagements to occur recently. Just as the two companies announced that they were looking to partner up, the oil and gas market in the U.S. took a turn for the worse, which made the price Energy Transfer Equity was set to pay for Williams  look rather steep -- most notably the $6 billion in cash it was set to pay out to Williams shareholders.

The deal led to the two companies filing competing lawsuits against each other. Williams  accused Energy Transfer of trying to get out of the deal and making moves to make the acquisition less appetizing to shareholders. Energy Transfer counter-sued, saying that Williams was refusing to cooperate with Energy Transfer's financing of the deal. The ugly mudslinging between the two only compounded the troubles their shares faced due to the fact that the general market for oil and gas stocks has been weak for some time. 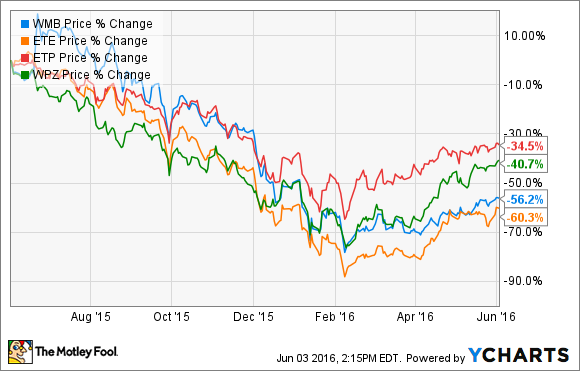 However, with the two companies now looking at alternative options for financing the deal, both stocks have gotten a decent lift. By making the deal happen, Williams will avoid a hefty breakup fee, and Energy Transfer will be able to use more of its own stock as currency, rather than needing to pay with cold hard cash (which would have probably come from debt).

One thing that may surprise investors is that amid all of this turmoil, shares of the two general partners' MLP subsidiaries -- Energy Transfer Partners (NYSE: ETP) and Williams Partners (NYSE: WPZ) -- haven't moved much. That's because in the short term, this deal doesn't have much of an immediate impact on the two entities. Neither of the two partnerships are involved in the financing of the deal, and their operations have not been much impacted.

Over the long term is where investors is these partnerships should start to ask questions. With the two general partners combining while keeping the two limited partnerships, we will need to see how the company decides to allcoate capital for growth in these two different entities and whether the two general partners combining forces will help to lower the cost of capital that will be needed for new projects.

Now what: This wrangling between the two companies has been a fascinating drama to watch. From an investor's perspective, though, there isn't a whole lot of incentive to buy or sell their stocks until both companies have signed on the bottom line. Even after that happens, it's probably better still to see how the company performs as a single entity. Considering how many twists and turns this story has taken over the past year, we can't be completely certain where this is heading, making their shares a little too speculative to dive intio today.