What: According to data from S&P Global Market Intelligence, shares of Weight Watchers International (NASDAQ:WW) surged 17% last month. The company posted a strong first-quarter earnings report and the stock got a boost later in the month thanks to an analyst buy rating. 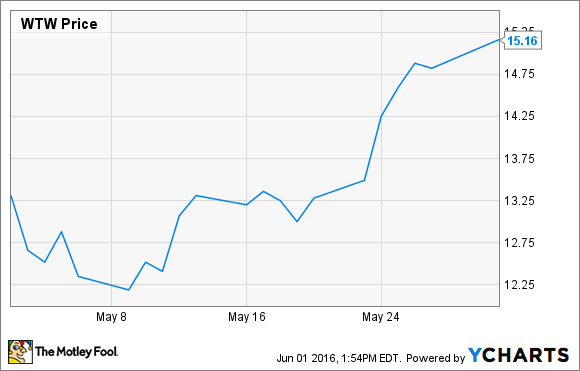 So what: As the chart above shows, Weight Watchers shares dipped early in the month despite a promising earnings report. Fresh off a partnership with Oprah Winfrey, the stock spiked as high as 16% on May 5 and finished the day up 3% in response to the first-quarter earnings report. Subscriber growth rebounded to a 5% increase globally and 11% in North America, thanks to the media mogul's influence.

Later in the month, the stock jumped 6% on May 24 after Sidoti initiated coverage with a buy rating and a price target of $25. Analyst Frank Camma said he expected the company to return to more profitable revenue and earnings growth, and saluted the more holistic approach of its new "Beyond the Scale" program.

Now what: In addition to the strong subscriber growth, Weight Watchers also raised its full-year earnings per share guidance from $0.70-$1 to $0.80-$1.05. The weight loss business is a fickle one, but the investment and partnership with Winfrey should help boost the company's performance. If it can deliver on its increased guidance, the stock could keep climbing.