Stocks rose on Tuesday but ended the trading day well below session highs. The Dow Jones Industrial Average (DJINDICES:^DJI) got one point passed 18,000 points before slumping into the close to finish up 20 points, or 0.1%. The S&P 500 (SNPINDEX:^GSPC) added two points, for a 0.1% uptick as well: 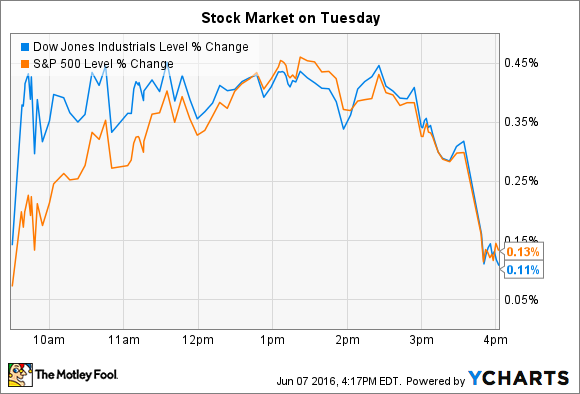 United Natural Foods soared 15% following fiscal third-quarter results that showed an improving profit picture for the organic food distributor. Earnings of $0.76 per share soundly beat consensus estimates of $0.66 per share, while UNFI's 1% sales uptick was in line with expectations. "We are pleased with our solid sequential quarterly improvement in net income," CEO Steven Spinner said in a press release.

The results didn't show evidence of relief from the intense competition that's been rocking the organic food industry, though. UNFI's gross profit margin slipped by 0.3 percentage points -- on par with the prior quarter's drop, thanks to increased competitive pricing pressures. The good news is that cost cuts helped protect bottom-line profits: Operating margin held steady at 3% of sales. Shareholders also cheered the fact that the company raised its sales and profit guidance for next quarter.

Over the longer term, UNFI hopes to benefit from an expanded portfolio. It recently acquired regional produce and packaged foods distributors Haddon House Food Products and Nor-Cal, for example.

Management is now focused on integrating these companies into the operations in order to build a faster-growing, more profitable business with deeper ties to its customers. Perhaps more scale and depth will give UNFI stronger pricing power.

Specialty retailer Michaels fell 8% as its fiscal first-quarter report failed to meet Wall Street's expectations. Comparable-store sales growth undershot investors' and management's target, clocking in at 1% compared to 3% in the prior quarter. Shopping trends "softened in April, resulting in a comp shortfall for the quarter versus our initial expectations," CEO Chuck Rubin explained in a press release.

Overall revenue climbed thanks to executives' acquisition of arts and crafts wholesaler Lamrite West, although the purchase dragged profitability lower. Gross margin ticked down to 41% of sales from 40% a year ago.

Rubin and his team see things getting worse in the current quarter before improving significantly over the second half of the fiscal year, and that's likely why the stock took a hit on Tuesday. Comps should be roughly flat in fiscal Q2 as the retailer faces what management called "unique, but anticipated headwinds." They still believe Michaels will grow comps by as much as 3% for the full year, though.

In addition to that improved sales growth pace, shareholders will be looking for the company's latest investments to begin paying off in the form of increased profitability through the second half of its fiscal year. However, since both sales and earnings trends were moving in the wrong direction this quarter, Michaels' stock understandably stepped back from its recent high.