What: In a month where many companies in the oil and gas industry saw modest gains thanks to crude oil jumping to the $50 per barrel, shares of Weatherford International (NYSE: WFT) went in the other direction and dropped 32%. The largest cause of the drop was when the company posted earnings results and analysts pushed back on some of management's longer term plans.

So what: The name of the game for Weatherford International for many years now has been cutting costs in order to start generating free cash flow again. For years it tried to do so with several restructurings and other gimmicky moves that didn't really pan out. Last year, though, it appeared that the company was getting serious about cutting costs and actually looked like it was getting back on track. 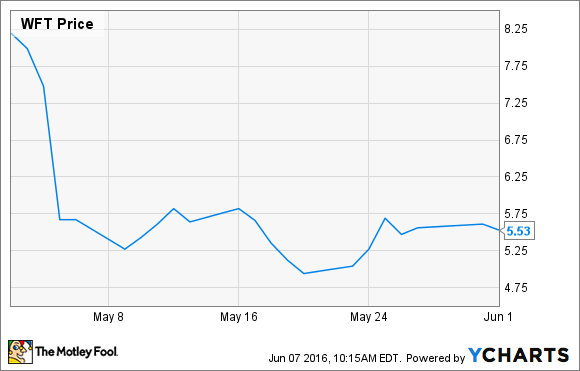 That progress made a U-turn last quarter as the company's cash flow turned to the negative again with a cash burn of $216 million. If we were to exclude "one time items" such as its severance, restructuring, and out of period interest payments, that cash burn would have been $48 million. However, those one time items have been occurring consistently for almost two years for a total of $2.57 billion "one time" charges.

The other concern for Weatherford was the company's plans to significantly curtail capital spending all the way until 2019. While being prudent with money can be a good thing, pushing back capital spending that much could lead to a deterioration of the company's equipment and offerings. If that were to occur, then the company could be looking at even greater declines in revenue.

Now what: Just when it was starting to look safe to get back in the water, Weatherford may not be on as stable ground as last year's results made it appear. Until the company can find a path forward that strikes a balance between investing in the future reasonably while keeping costs in-line, it's probably best to sit this one out.