Please ensure Javascript is enabled for purposes of website accessibility
Log In Help Join The Motley Fool
Free Article Join Over 1 Million Premium Members And Get More In-Depth Stock Guidance and Research
By Tyler Crowe - Feb 11, 2016 at 8:15AM

A little free cash flow can mean a lot for a company that has been burning through cash for five years straight.

One of the hardest things for a company to do is rebuild trust with investors. If a company makes some questionable moves or doesn't always deliver on promises, then it can take some time to rebuild trust with those that may buy its stock. Weatherford International (NYSE: WFT) has been trying to pay its penance to shareholders in recent quarters. After years of less than stellar resutls and a couple of years of turnaround efforts, the company's earnings showed that it had almost delivered on one promise management had made earlier this year: Be a free cash flow generating company. Let's take a quick look at the company's results and whether this was accomplishment was enough to reinstill trust in Weatherford.

One thing to consider when looking at those results for the most recent quarter was that Weatherford took a whopping $1.11 billion in after-tax charges. Most of those charges -- $952 million -- were related to impairments of fixed assets, but there were also some legacy contract, severance costs, and foreign currency losses baked into those losses as well. As an investor, it would be great if we could simply chalk these up as one time charges, but for quite some time Weatherford has been tallying up these "one time" charges to the point that they are becoming a pretty regular occurrence. In the previous six quarters, the company has been taking these one time charges, and today those "one time" expenses now equate to $2.41 billion.

Management specifically said that non-recurring and one time charges will be significantly curtailed in 2016 to the point they are insignificant. Let's hope that this quarter management got all those charges out of the way.

Like most of its peers, Weatherford's earnings took the biggest hit in the North American segment of the business. Here's a quick breakdown of its results by geographic segment. 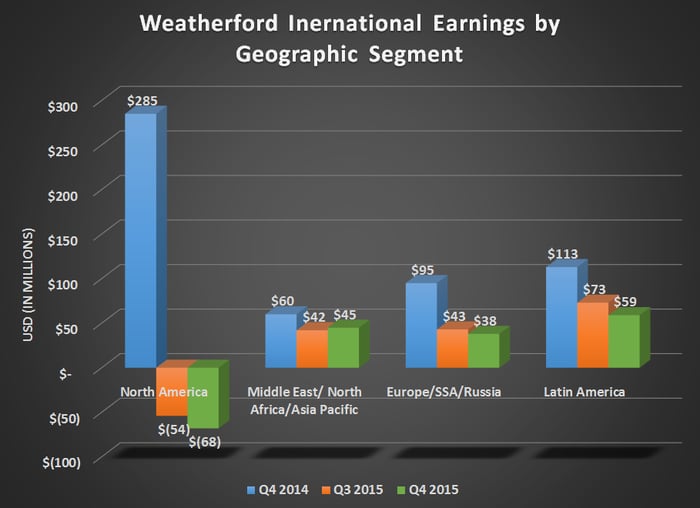 Don't get me wrong: Weatherford has gone to great lengths to become a net cash positive operation, and the fact that it was able to do so in the middle of this most recent downturn is worth a tip of the cap. If we were to see any sort of upswing in oil and gas activity, Weatherford will be in a decent position to be a profitable company once again.

Management's outlook
According to Weatherford CEO Bernard Duroc-Danner, the company remains a little reserved about the seeing business increase either this quarter or next, but beyond that things look more promising:

As we look forward, we believe that oil prices will respond to the gradual tightening of the supply demand balance, with increasing demand and diminishing supply. This is inevitable, given the extreme cuts in both capital and operating spend by our customer base around the world. Regardless, we have geared the company and will increasingly do so for a prolonged period of very low activity. We are ready for as protracted a downcycle as markets will dictate.

The near-term outlook is challenging with lower levels of customer activity, continued pricing pressures and seasonal declines across many parts of the Northern Hemisphere. Volatility adds uncertainty to decision making already strained by the distressed level of oil prices. We believe the second half of the year will show a slight recovery underpinned by the stabilizing of commodity prices.

This opinion is shared among most of Weatherford's peers, but most of them seem to disagree on the timing. Some of the more optimistic outlooks have come from Core Laboratories (CLB 0.43%), which sees a pretty rapid turnaround in the second half of 2016 as decline rates really start to sink their teeth in to existing production. Conversely, Schlumberger (SLB 2.09%) is much more measured with its outlook. It believes that producers will need to refill their cash coffers and shore up their balance sheets before anyone on the oil services side of the business sees an uptick, and that might not happen until we get into 2017.

10-second takeaway
Weatherford International deserves a bit of a golf clap for being able to return to free cash flow positive status. The fact that it could make it happen in the middle of a downturn is even more promising and could set itself up for a decent recovery once oil and gas activity picks back up again. At the same time, though, investors shouldn't get too excited about one year of marginal cash generation. The company still lags its peers in terms of profitability, and it's hard to justify making a deep commitment to shares of Weatherford when some of its peers outperform and are trading at decent discounts themselves.

Tyler Crowe owns shares of Core Laboratories. You can follow him at Fool.com or on Twitter @TylerCroweFool.

The Motley Fool owns shares of and recommends Core Laboratories. Try any of our Foolish newsletter services free for 30 days. We Fools may not all hold the same opinions, but we all believe that considering a diverse range of insights makes us better investors. The Motley Fool has a disclosure policy.