You rely on consumer staples every day. They include daily essentials such as food and beverages, personal care products, household and home care products such as paper goods, and alcohol, tobacco, and cosmetics.

You buy consumer staples regardless of the state of the economy, and the amount you buy is relatively fixed in good times and bad. In this way, the consumer staples sector behaves much differently than consumer discretionary businesses such as restaurants, hotels, and apparel, or consumer durables, which are long-lasting products such as furniture and electronics.

Consumer staples companies may not have the highest earnings growth or year-over-year revenue growth because these stocks tend to be large, mature companies. Historically, the sector has experienced relatively little disruption. But these stocks make up for modest growth with low price volatility, reliable profits, dividends, and defensive positioning. 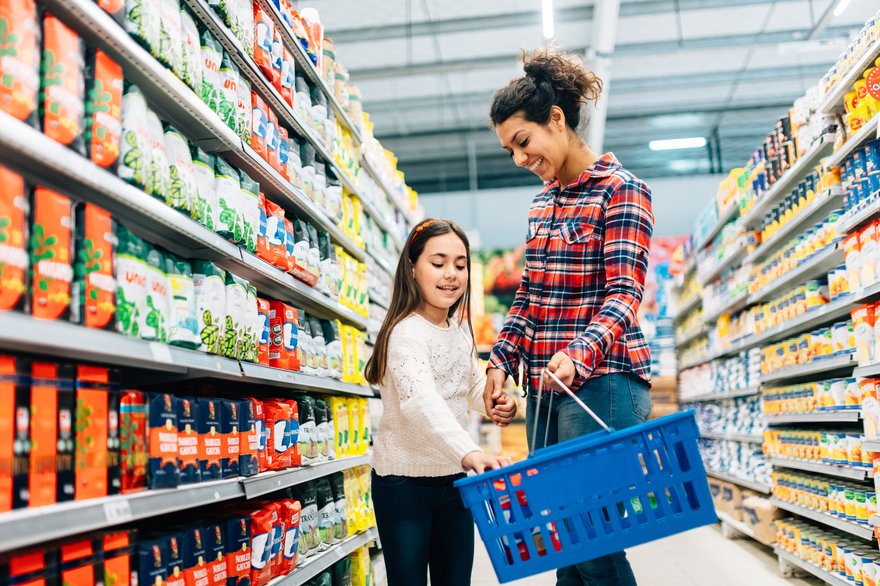 Consumer staples stocks function in a non-cyclical manner, meaning they offer investors safety during recessionary climates. Since these companies sell goods such as food and cleaning products that consumers rely on regardless of the state of the economy, they tend to generate solid profits even in weak economies. For instance, a number of consumer staples companies thrived during the early stages of the COVID-19 pandemic as consumers stocked up on essentials and avoided spending on discretionary purchases such as travel and restaurant meals.

More recently, that spending has shifted back to discretionary categories, weighing on some consumer staples stocks such as Clorox (NYSE:CLX), which had earlier benefited from the demand for cleaning products.

Some consumer staples stocks are Dividend Aristocrats -- companies that have increased their dividend payouts every year for at least 25 consecutive years. For this reason, consumer staples stocks are often popular with retirees and other investors seeking long-term income and security. Many offer better dividend yields than an S&P 500 (SNPINDEX: ^GSPC) exchange-traded fund (ETF), which currently pays a dividend yield of roughly 1.5%.

Because consumer staples companies operate in stable sectors and sell products that are always in demand, the biggest ones have been around for a century or more. Their longevity is a reflection of their brand value, a history of acquiring smaller brands, and their ability to endure a wide range of challenges and economic cycles.

One important factor to monitor when looking at a consumer staples company is its ability to pass on cost increases. Although this issue often takes center stage during inflationary periods (like today), it is always an important component of growth. Simple price increases, changing packaging sizes, and production innovation are all vital tactics that get used. In inflationary periods, costs for ingredients, labor, and distribution often rise faster than a company’s ability to pass on price changes. There can be a period of margin weakness that will likely be temporary for the best-managed consumer staples companies. Price increases also need to be balanced against the risk of consumers trading down to cheaper alternatives.

Just as you’re familiar with many consumer staples products, you’ll likely be familiar with many of the top stocks in the sector such as Procter & Gamble (NYSE:PG), PepsiCo (NYSE:PEP), and Estee Lauder (NYSE:EL). For those interested in a contrarian name, Unilever (NYSE:UL) is also worth examining.

Procter & Gamble is best known for its marquee brands such as Tide, Gillette, and Crest. The household and personal care company is almost 200 years old. A large number of its brands hold the No. 1 or No. 2 market share position in their categories, including paper products, laundry detergent, diapers, and beauty products. P&G is also a Dividend Aristocrat.

P&G is currently developing innovative products, including the nontoxic insect repellent Zevo. In 2019, it released a line of plant-based cleaning products called Home Made Simple. After streamlining its business by selling off non-core brands, restructuring, and cutting costs, P&G's position is as strong as ever.

Like other consumer staples companies, P&G received a healthy boost from the pandemic. However, the company’s results have continued to be strong, with organic sales (which exclude the effects of acquisitions, divestitures, and currency exchanges) up 10% during the fiscal third quarter ending June 30, 2022. Core earnings per share also rose 6%. Notably, the organic sales gain was driven by a mixture of higher volume, price increases, and selling more higher-priced items. The company is hitting on all cylinders.

PepsiCo is much more than its namesake beverage brand. The company also owns Frito-Lay and Quaker, as well as popular drink brands such as Mountain Dew and Gatorade. Its Frito-Lay snack business generates almost as much revenue in North America as its beverages, and that business has been a source of growth while soda sales slow in the U.S. and around the world. With its global brands and distribution, Pepsi enjoys many of the same advantages as industry giants P&G and beverage company competitor Coca-Cola (NYSE:KO).

Because of its exposure to the restaurant industry, Pepsi was more affected by the early stages of the pandemic. However, the company was able to quickly recover, and it posted 9.5% organic revenue growth in 2021. Through the first six months of 2022, it kept the ball rolling by expanding organic revenue growth by 13.3%.

Pepsi has also grown through acquisitions. In 2018, it acquired SodaStream, which gave the company a leading position in countertop soda-making. It also bought energy drink maker Rockstar Energy in 2020.

PepsiCo recently became a Dividend King, having raised its quarterly payout for 50 years in a row, which shows that it’s an attractive stock for income investors.

The cosmetics subsector tends to be more volatile than other parts of the consumer staples industry. That’s because trends in the beauty business, which are subject to broader fashion tastes, tend to change more quickly and attract smaller brands.

Additionally, cosmetics companies were hit harder by the COVID-19 pandemic than most consumer staples businesses because social distancing led to a decline in the demand for makeup and fragrances.

Nonetheless, Estee Lauder has been a top performer, more than doubling the S&P 500’s roughly 60% return over the past five years. However, that includes a more dramatic ascent and a much steeper decline during the 2022 bear market, highlighting the volatile nature of the sector.

Estee Lauder is the second-biggest pure-play cosmetics company in the world behind L’Oreal (OTC:LRLCY), and it has an impressive array of prestige beauty brands, including Clinique, Aveda, La Mer, and MAC. The company’s recent growth has been driven in large part by its success in the Chinese market, where its skin care products have performed particularly well.

That said, recent efforts in China to contain the spread of COVID-19 have led the company to reduce its fiscal 2022 guidance. The drop was notable, taking organic sales growth to between 5% and 7%, down from the previous guidance of 10% to 13%. Still, the stock is likely to be a good choice for investors looking for a mix of high growth and the stability of a traditional consumer staples stock despite the near-term uncertainty related to pandemic issues.

For investors who prefer to take a contrarian approach, Unilever is working on a business turnaround. The negatives here, which include the failure to consummate a high-profile acquisition, have left the shares with a historically high dividend yield of about 4.2%. What’s most interesting, however, is that activist investor Nelson Peltz – who was instrumental in turning Procter & Gamble’s business around – has been added to Unilever’s board of directors.

Although there is unlikely to be a short-term fix to Unilever’s problems, the company is already streamlining its business to increase the accountability of key leaders, something Peltz has suggested is necessary. And, with iconic global brands such as Dove, Ben & Jerry’s, Knorr, and Hellmann’s, the company has a strong brand portfolio to lean on as it works to improve its growth profile. Long-term investors can happily collect the generous yield while waiting for Unilever’s business performance to improve.

For investors who prefer exposure to the whole consumer staples sector rather than picking individual stocks, buying shares in an exchange-traded fund (ETF) is the most sensible option. The chart below summarizes three different consumer staples ETFs:

All three ETFs have Procter & Gamble as their No. 1 holding. PepsiCo and Coca-Cola show up in the next two slots of each top-10 list, with Estee Lauder turning up lower down on two of the three lists. The iShares U.S. Consumer Staples ETF doesn’t include retailers, but the other two ETFs have giants such as Walmart (NYSE:WMT) and Costco (NASDAQ:COST) making the cut.

In addition, all three ETFs own popular consumer staples stocks such as:

Are consumer staples stocks right for you?

The best consumer staples companies tend to have consistently strong organic sales, leading market shares, and attractive dividend yields. Although the industry sees relatively little innovation and growth, consumer staples products tend to be timeless, and these companies are likely to continue to endure.

Consumer staples companies have an excellent ability to withstand recessions, increase their dividends, and post consistent, incremental growth. All of those characteristics make them good choices for investors looking for reliable, income-producing stocks.