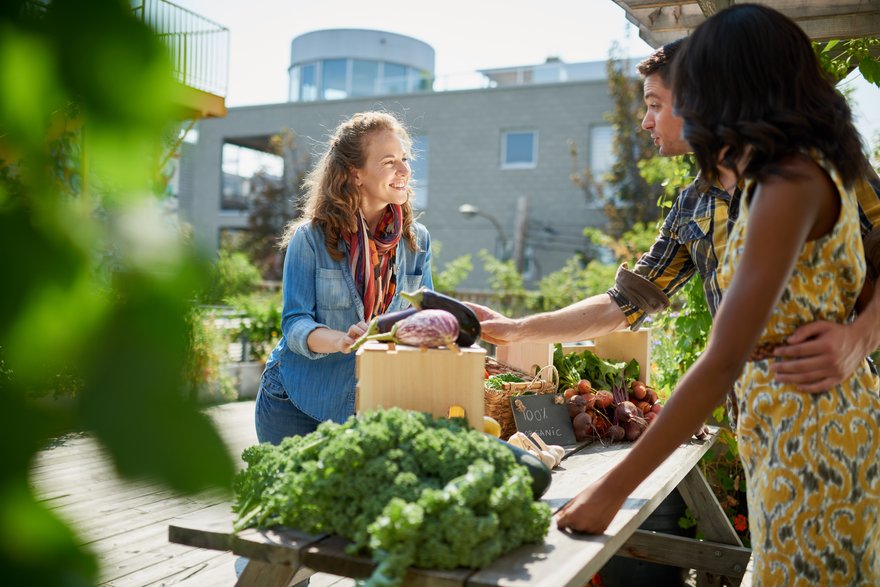 Agriculture is a life-sustaining operation, and there are numerous ways for investors to own a piece of the action.

Like much of the global economy, the agricultural industry has been affected by the COVID-19 pandemic, but it’s made an impressive recovery as commodity prices have soared in several categories and the war in Ukraine has further squeezed the supply of products such as wheat and fertilizers.

A number of agriculture exchange-traded funds, such as iShares MSCI Agriculture Producers ETF (NYSEMKT:VEGI), have traded around all-time highs, although prices for commodities such as corn, soybeans, and wheat pulled back by July due to fears of a recession and falling oil prices. A stronger dollar has also been weighing on ag commodities such as fertilizer. Since global commodities are priced in dollars, a strong dollar makes them more expensive in other currencies, bringing down the price.

Agribusiness is big business and touches on a wide array of industries. The scale required for operations has led to market power being concentrated in a handful of titans. These companies -- many with healthy profits, cash flows, and dividends -- offer excellent opportunities for investors.

Top 8 agriculture stocks to invest in 2023

Investors can choose among companies providing agricultural products and services such as fertilizers, pesticides, seeds, processing, and livestock. There are also a handful of emerging markets. As producers of basic foods, many agricultural stocks are considered consumer staples, meaning that demand for their products is not affected by the broader economy.

Here’s a list of nine top dividend-paying agriculture stocks and one start-up spanning a variety of investment opportunities. They’re great for investors with a long-term mindset.

Of course, not all agriculture stocks are created equal. There are unique considerations in each ag-related industry. As you’re assessing which agricultural stocks are right for you, consider how the opportunities and risks align with your investing preferences.

The basics of agribusiness: Seven opportunities to consider

Here's an overview of seven major opportunities, listed in no particular order:

The world’s major crop nutrients are nitrogen, phosphorus, and potassium. Nitrogen is manufactured through synthetic chemistry, while potash and phosphate are primarily mined. Major crops such as corn, soybeans, and wheat rely on all three nutrients.

Fertilizer prices soared in 2021 as raw material costs increased for nitrogen fertilizers and demand also rose, leading to a boom year for producers such as Nutrien. Prices for fertilizers such as nitrogen and potash spiked even higher after Russia invaded Ukraine; both countries are major fertilizer producers. More recently, they’ve come down for the same reason that commodity prices are down.

Nutrien, one of the world's largest fertilizer producers and the largest potash producer, is on track to generate 17 million metric tons annually. The company has some of the lowest nitrogen production costs. The commodities boom has been kind to Nutrien, with crop prices and cash flow margins at multi-year highs. As a result, the company reported record adjusted EBITDA of $7.1 billion in 2021 and sees adjusted EBITDA soaring past $14.5 billion in 2022 after reporting record first-quarter profits.

ScottsMiracle-Gro offers exposure to individual consumers such as gardeners and homeowners in need of lawn care products, as well as farmers. The stock did well during the early stages of the COVID-19 pandemic as stay-at-home orders and a general shift to more time spent outdoors sparked an interest in lawn and garden care. However, revenue declined in recent quarters as the economy has reopened, although comparisons should get easier over the rest of 2022.

Pesticides have also seen a spike in prices due to supply chain constraints and material shortages. A wave of consolidations in recent years is also reshaping the industry.

Bayer acquired Monsanto in 2018 to become the dominant player in the industry. And, in a series of transactions from 2018 to 2019, FMC completed the spinoff of its lithium segment, sold its nutrition business, and purchased assets from DuPont to become one of the largest global agrochemical companies. DuPont and Dow Chemical merged and then split into three separate companies in 2019, with one being Corteva Agriscience.

Litigation and regulation remain risks in the sector, however. In February 2021, Bayer set aside $2 billion to cover any further claims against its Roundup weed killer, which has been tied to various cancers. Corteva could also face litigation from its toxic pesticide chlorpyrifos, which the U.S. Environmental Protection Agency banned in 2021, and Corteva pledged to stop using in 2020. A class-action lawsuit in California was filed against the company over the pesticide’s links to brain damage in children. Agricultural groups have also sued the EPA over the ban.

Advances in data crunching, satellite imagery, and mobile computing power have given rise to digital agriculture. Although this might appear to be a new opportunity, hundreds of millions of acres were covered as of early 2020.

One example: Many farmers can now pay a monthly or annual subscription fee for historic and predictive farm-specific data. How many seeds should a farmer place in each row in the northwest corner of their land? When might be the optimal time to apply fertilizer this season? Are corn rootworms likely to be worse than usual?

John Deere has emerged as a leader in the category. The technology, paired with its industry-leading farm equipment, has led to a boom in the stock, which has delivered a total return of more than 10,000% since its debut in 1978.

Increased demand for animal-free proteins is driving interest in plant-based meat products. To succeed, consumer brands such as Beyond Meat (NASDAQ:BYND), Impossible Foods, and others need to deliver on nutrition, taste, texture, and price. Companies focused on plant-based products may benefit by creating partnerships and supply agreements with larger agriculture companies such as Archer-Daniels-Midland, Bunge, and Tyson Foods.

A handful of nontraditional stocks also merit consideration. Precision BioSciences (NASDAQ:DTIL) is developing a novel gene-editing technology platform focused on human health, but it also owns a subsidiary dedicated to agricultural applications. One focus is engineering high-protein, neutral-tasting chickpeas, which could become a next-generation, plant-based protein source. Beyond Meat relies on yellow pea protein for its products, but it might be tempted to switch at least some supply to chickpeas if the Precision product lives up to the hype.

Chemical-based pesticides and fertilizers are poised to dominate their respective markets for the foreseeable future, but investors should know that living technologies are also in production and may see significant growth in the years ahead. Biologicals are microbe-based treatments of soils or crops designed to boost yields, improve defenses against pests, and reduce dependence on chemical inputs.

Individual investors can gain exposure to the emerging opportunity in a few ways. Bayer, FMC, and Corteva Agriscience are all leading developers of biologicals. From its acquisition of Monsanto, Bayer now has the leading biologicals brand on the market through a partnership with Novozymes (OTC:NVZM.Y).

Vertical farming is the latest agricultural technology to sweep the market. Investors are betting big on stocks such as AppHarvest and Local Bounti (NYSE:LOCL), a hybrid between vertical farming and hydroponics. In vertical farming operations, companies use shelves and artificial light to grow produce, minimizing land and water consumption. By conserving space, vertical farming has the potential to create facilities that are located much closer to consumers than traditional farms.

AppHarvest promises to do just that since the Kentucky-based company says it distributes produce to consumers within a one-day drive of its facilities. The proximity to markets compares favorably with conventional produce, which is often imported from abroad or shipped from California.

AppHarvest’s 60-acre flagship facility is among the biggest indoor farms in the world and serves as a template for the business. The company is currently focused on growing tomatoes, but it has big expansion plans and forecasts at least $350 million in revenue with strong profit margins by 2025.

Local Bounti, a Montana-based ag tech start-up, also has big ambitions, targeting $462 million in revenue by 2025 as it plans to open four new facilities. The company counts Cargill as a major investor and partner; the privately owned agriculture giant loaned $200 million to Local Bounti in September 2021 and is considering financing all of its future facilities through 2025.

There are a number of agribusiness applications on the horizon that investors should watch for in the years ahead.

Flavors and fragrances are high-margin products mostly manufactured through synthetic chemistry, but specialty agriculture has a place in the market as interest increases in items such as natural perfume. Vertical farming also seems to be a good fit here since the amounts of water and land needed are much lower than in conventional food production.

Water is a crucial component in agriculture, but it is also a limited resource, and global water consumption is expected to significantly grow over the next generation. Consequently, investors should keep an eye on water treatment and desalination stocks such as Xylem (NYSE:XYL) and Consolidated Water (NASDAQ:CWCO), which offer exposure to water sustainability.

Humans have made tremendous progress in reducing famine and food shortages in the past 70 years, but that doesn’t make food security any less important in the 21st century. A rapidly expanding global middle class and increasing population are likely to raise caloric demand and shift preferences to more protein-heavy foods. It will require some new technologies to meet this challenge, and agricultural companies like those above are hard at work on these projects. Is your portfolio ready to harvest the opportunity?

Why AppHarvest Jumped 60.5% This Week

3 Best Infrastructure ETFs to Watch in 2023