In 2020, American biochemist Jennifer Doudna and French microbiologist Emmanuelle Charpentier were awarded the Nobel Prize in Chemistry for their discovery of the CRISPR gene-editing technology. The Royal Swedish Academy of Sciences summed up the significance of their discovery by saying, “This year’s prize is about rewriting the code of life.”

Gene-editing companies using CRISPR technology have the potential to treat and even cure diseases caused by genetic variants. The gene-editing market is projected to reach $18.5 billion by 2028. 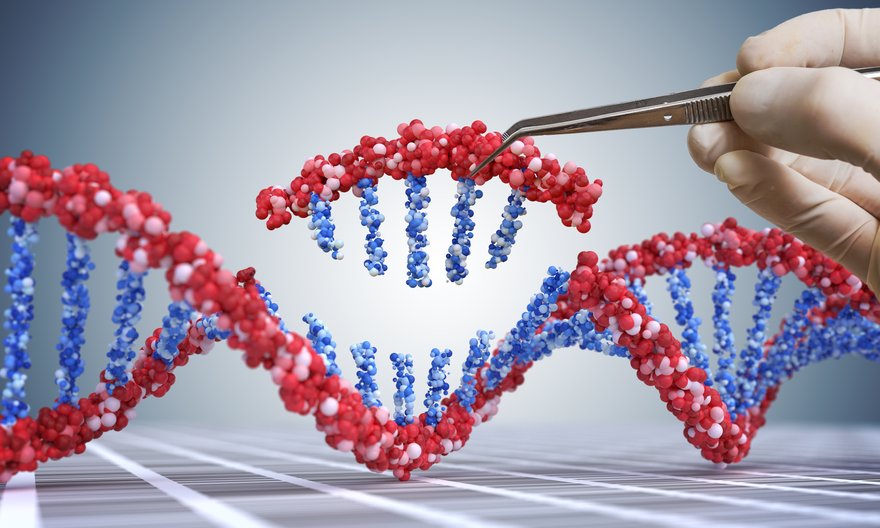 Gene-editing companies to invest in

These are some of the gene-editing companies investors should have on their watch list:

Intellia was co-founded by Jennifer Doudna in 2014. Its mission is to “develop potentially curative gene editing treatments that can positively transform the lives of people living with severe and life-threatening diseases.”

In 2021, Intellia and its partner, Regeneron Pharmaceuticals (NASDAQ:REGN), announced the first clinical data supporting the use of in vivo (in the body) CRISPR-Cas9 gene editing in humans. Since then, the two companies have reported additional positive results from early-stage testing of their CRISPR therapy NTLA-2001 in treating ATTR amyloidosis, a debilitating and usually fatal protein misfolding disorder. The treatment may hold promise for other protein misfolding disorders, including Alzheimer's, Parkinson's, and Huntington's diseases.

Intellia raised eyebrows in August 2022 with an announcement that it was discontinuing the development of NTLA-5001, one of only four programs at the time that the company had in clinical testing. NTLA-5001 is an experimental cell therapy in which the T cells of a patient are engineered to target a specific antigen for treating acute myeloid leukemia.

The company didn’t make its decision due to safety or efficacy issues with the clinical trial of NTLA-5001. Instead, Intellia chose to refocus its ex vivo (out of the body) strategy only on cell therapies that use cells from healthy donors. These are known as allogeneic or “off-the-shelf” cell therapies. Intellia’s management team felt that its allogeneic platform offers more promise.

CRISPR Therapeutics was co-founded by Emmanuelle Charpentier in 2013. The company’s mission is "developing transformative gene-based medicines for serious human diseases."

CRISPR Therapeutics and its partner, Vertex Pharmaceuticals (NASDAQ:VRTX), hope to be first to market with a CRISPR gene-editing therapy. The two companies expect to file for regulatory approvals in Europe by the end of 2022 for exa-cel (formerly known as CTX001) in treating rare blood disorders sickle cell disease (SCD) and transfusion-dependent beta thalassemia (TDT). CRISPR Therapeutics and Vertex are also in discussions with the U.S. Food and Drug Administration (FDA) about next steps for seeking approval for the therapy.

Exa-cel holds the potential to be a one-time functional cure for SCD and TDT. CRISPR Therapeutics and Vertex presented new clinical data in June 2022 showing remarkable results for the therapeutic candidate. None of the 31 patients with SCD in the study experienced vaso-occlusive crises (VOCs) after receiving an exa-cel infusion. VOCs occur when sickled blood cells block blood flow to tissues, depriving them of oxygen. Also, 42 of 44 TDT patients in the study were transfusion-free after receiving the experimental therapy.

The partnership with ViaCyte will likely tie CRISPR Therapeutics even more closely to Vertex. In July 2022, Vertex announced plans to acquire ViaCyte.

Beam was co-founded by David Liu and Feng Zhang in 2017 with a vision of “providing life-long cures to patients suffering from serious diseases.” It is pioneering the use of base editing -- a potential new class of precision gene editing described as a “molecular pencil” able to erase and rewrite a mutation rather than slicing it out.

The company expects to begin enrolling patients in a phase 1/2 study evaluating BEAM-101 in treating SCD in the second half of 2022. It also plans to file for FDA approval in 2022 to advance another SCD candidate, BEAM-102, into early-stage clinical testing.

Beam experienced a setback in August 2022 when the FDA placed a clinical hold on its Investigational New Drug (IND) application for BEAM-201 in treating T-cell acute lymphoblastic leukemia (T-ALL) and T cell lymphoblastic lymphoma (T-LL). The company is in discussions with the FDA to resolve the agency’s concerns.

In addition to its ex vivo programs, Beam is also moving forward with an experimental in vivo base-editing therapy targeting liver disease. The company plans to kick off IND-enabling studies in 2022 for BEAM-301 in treating glycogen storage disease 1a, a rare liver disease.

Editas was co-founded in 2013 by CRISPR gene-editing pioneers Feng Zhang, George Church, J. Keith Joung, and David Liu. Its mission is to “translate the power and potential of genome editing into a broad class of gene edited medicines that transform lives of people living with serious diseases.”

In July 2022, the FDA lifted a partial clinical hold on a clinical study evaluating EDIT-301 in treating SCD. Editas plans to report results from the study by the end of 2022. It’s also moving forward with patient dosing in a study of the gene-editing therapy in treating patients with TDT.

Editas could soon add another clinical program to its pipeline. The company is on track to begin IND-enabling studies for EDIT-103 by late 2022 in treating a rare retinal degenerative disorder called rhodopsin-associated autosomal dominant retinitis pigmentosa.

Learn about stocks that manufacture and sell drugs.

The four companies were started by clinical researchers to capitalize on the advancements in CRISPR gene-editing technology. CRISPR (pronounced “crisper”) is an acronym for Clustered Regularly Interspaced Short Palindromic Repeats. The name describes the DNA sequences spelling out the genetic code that guides the development of life.

CRISPR is based on the immune system that bacteria have developed to thwart viruses. The technique has been described as a “molecular scissor” honed in the battle of bacteria vs. virus over millions of years. When attacked by a virus, bacteria are able to target, slice, and destroy the DNA of the virus.

In 2012, American biochemist Jennifer Doudna and French microbiologist Emmanuelle Charpentier studied the phenomena and discovered how CRISPR-associated" (Cas) proteins could be used to slice strands of DNA. At the same time, RNA molecules made in a lab could guide Cas proteins to exactly where to cut the DNA. The technique works in any cell and opens the possibility for gene editing in humans, plants, and animals.

The medical implications of CRISPR-Cas9 human gene editing are profound. The door is now open for using gene editing as a “one-and-done” treatment for a wide range of deadly and debilitating genetic conditions. In his New York Times best-seller The Code Breaker, author Walter Isaacson described CRISPR as changing "the future of the human race." (If you're unfamiliar with the book, you might start by watching The Motley Fool’s former healthcare bureau chief Corinne Cardina interview Isaacson on Fool Live.)

These gene-editing companies have the potential to be very successful. Both Intellia and CRISPR have found large pharmaceutical partners to help fund development and usher the new treatments to market. Both Beam and Editas are pursuing innovations that meaningfully address some of the challenges and shortcomings in CRISPR-Cas9.

Many investors find gene-editing companies complicated. Other investors find them too volatile, with prices stagnating for long periods and then moving strongly up or down depending on publicity about new research findings or the outcome of clinical trials.

One approach for starting to invest in gene-editing stocks is to consider a basket strategy of putting money into several companies and watching them progress over several years. Billions in market value will be created by companies with the ability to cure diseases.

For patient, buy-and-hold investors, gene-editing companies provide an opportunity to expand your portfolio during the coming genomic revolution.