What: The fertilizer industry has had a rough going in the last several years. Unfortunately, May wasn't any better for The Mosaic Company (NYSE:MOS), CF Industries (NYSE:CF), and Terra Nitrogen Company L.P. (NYSE: TNH) -- which all fell at least 11%. 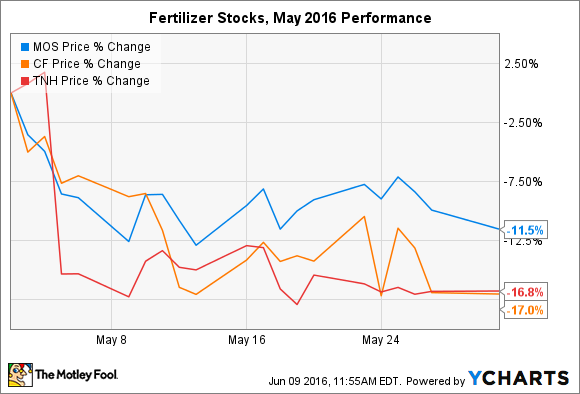 So what: There was no single catalyst for the declines, but investors are well aware of the persistent headwinds facing the industry. American inventories of the three major crop nutrients -- nitrogen, potash, and phosphate -- were all higher in the first quarter of 2016 than in previous years. That has helped to nudge prices even lower than the multiyear lows witnessed last year, while India and China hesitating to sign import contracts thus far (which is months later than usual) have stoked pessimism over the direction prices will head from here.

Terra Nitrogen, the limited partnership connected to CF Industries, also announced Q1 earnings in early May. Investors got smacked with lower top- and bottom-line results compared to the year-ago period. While that has become the new normal as of late, the company announced its lowest cash distribution since early 2011. The announcement resulted in the largest single-day decline in the stock since December 2014.

The Mosaic Company announced Q1 earnings at the beginning of the month, which were accompanied by reduced guidance for phosphate production volumes and total revenue. Lowering output -- something many producers have agreed to do -- will eventually erase the industry's glut, but it will take some time for the changes to work their way through the global markets.

Meanwhile, at the end of May, CF Industries announced the mutual termination of a proposed acquisition of certain logistics and distribution businesses owned by the Dutch company OCI. The original deal would have created the world's largest publicly traded nitrogen company, but it faced insurmountable regulatory obstacles after the U.S. Department of the Treasury put bull's-eyes on megamergers. As a result of the acquisition falling through, CF Industries will pay OCI a fee of $150 million.

Now what: The fertilizer industry is still working its way through a pretty deep rut right now. Global markets will respond to lower inventories and, potentially, higher grain prices -- should commodity prices recover -- but there won't be an overnight leap in the health of the industry. Investors chasing high yields and large dividend payouts may want to consider that a potential recovery could be another year (or more) away.