Stocks touched solid gains early in the trading session on Wednesday but sold off through most of the day to end up with minor losses. The Dow Jones Industrial Average (DJINDICES:^DJI) shed 49 points, or 0.3%, and the S&P 500 (SNPINDEX:^GSPC) lost 3 points, or 0.2% ahead of Thursday's referendum on the U.K.'s membership in the European Union: 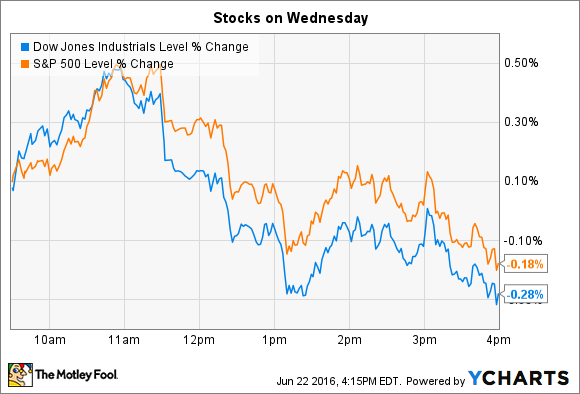 In economic news, housing sales jumped by 1.8% in May, according to a new report by the National Association of Realtors. The market expanded to a 5.5 million-home annual pace, the highest since 2007, as low mortgage rates and rising home equity levels convinced more buyers off of the sidelines.

FedEx was one of the worst daily performers on the S&P 500 following its fiscal fourth-quarter earnings announcement. The delivery specialist's revenue rose 7% thanks to a 20% jump in a ground segment that's being goosed by surging e-commerce activity. Adjusted earnings spiked to $3.30 per share from $2.66 per share a year ago, which also beat consensus expectations. FedEx continues to reap rewards from its cost-cutting initiatives: Operating margin rose to 10% of sales in fiscal 2016 from 9% last year. While that's all good news, the company telegraphed uncertainty regarding the coming fiscal year, which could be what pushed the stock lower. Due to integration expenses and financing costs of its huge TNT Express acquisition, FedEx is "unable to provide unadjusted earnings guidance," executives said in a press release. That purchase put the company in a better position for long-term growth but will likely pinch reported profits over the short term, management warned.

La-Z-Boy's stock spiked after the furniture specialist announced a strong end to its fiscal year. Sales at existing stores ticked up by 2%, and a growing store base pitched in to push overall revenue higher by 11%. The highlight of the quarter came from La-Z-Boy's retailing segment, though. That division enjoyed a 13% comparable-store sales boost as profitability improved to 6% from 4%.

Management sees those gains as just the start. "As our retail segment continues to increase in size, we will have further opportunity to benefit from the combined margin associated with our integrated retail strategy where we earn a profit on both the wholesale and retail sales," CEO Kurt Darrow said in a press release. "We are well positioned for ongoing success as we enter fiscal 2017," Darrow added, while noting that the summer months are typically some of its slowest, so Q1 won't show much sales growth.

Finally, RV maker Winnebago enjoyed a stock price bounce after beating consensus estimates for earnings and profits this quarter. The volume of motorized home sales rose 12%, marking an encouraging reversal from the prior quarter's 3% decline. Winnebago also made progress on reducing costs and increasing manufacturing efficiencies. As a result, bottom-line profitability jumped to 5.3% of sales from 4.3%. With that positive momentum, the company is hoping to capitalize on growth in the recreational vehicle market. New model introductions will be key to achieving that target, and while investors can't predict whether those launches will win market share, they know Winnebago's sales and profit trends are headed in the right direction for now.