Seaspan Corporation's (NYSE:ATCO) business model should be the anchor that prevents its stock from being tossed around by the waves of global economic turbulence. By leasing the bulk of its vessels under long-term time charters, the company locks in its cash flow, which should insulate it from industry downturns. However, while its cash flow continues to rise alongside its fleet, the company's stock has taken investors on a turbulent ride in 2016: 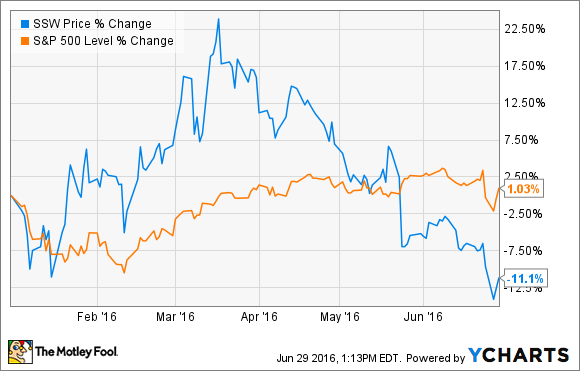 Weak global trade growth and overcapacity have created a swell of uncertainty in the global shipping marketplace. Shippers are struggling to make money, which is forcing them to explore options to reduce costs. This has led to a wave of mergers and acquisitions in the sector, while others are seeking relief on charter rates to reduce debt.

For the most part, Seaspan Corporation has been unaffected by the turmoil around it. Its long-term time charters, which have an average of five years remaining, support its cash flow and provide visibility. That said, one of its customers did recently reach out, asking for a lifeline by seeking a 30% reduction in its charter rate. While Seaspan Corporation has refused to negotiate, the market is worried that it might not be able to avoid doing so if its customers start sinking.

Meanwhile, the weak market is making it tough for the sector to charter vessels, whether those be newbuilds or vessels coming off contract. In fact, according to Gregory Zikos, the CEO of rival Costamare Inc. (NYSE: CMRE), "charter rates and asset values are at historically low levels." Overcapacity is also weighing on charter rates, with the industry's idle fleet now up to 7.4%, which is the highest it has been since the financial crisis.

While Seaspan Corporation's business model has largely insulated it from the current storm in the shipping sector, that has not kept market fears from weighing down its stock price. Not only is the market starting to worry that the company's charters might not be a sure thing, but the company has several unchartered newbuilds scheduled for delivery next year. These fears are not likely to abate until charter rates stop sinking, which won't happen until global trade growth starts to improve.

Why Has Seaspan Corporation's Stock Been a Sinking Ship in 2016? @themotleyfool #stocks $ATCO Next Article
Current