Keep an eye on Procter and Gamble, Tesla, and Fitbit shares in the days ahead.

Stocks churned in place last week as investors digested a flood of fresh corprate earnings reports. The Dow Jones Industrial Average (^DJI -0.90%) and the S&P 500 (^GSPC -0.73%) each fell, although the Dow's 0.8% dip was more substantial than the S&P's 0.1% decline. Indexes both remain higher by 6% so far this year: 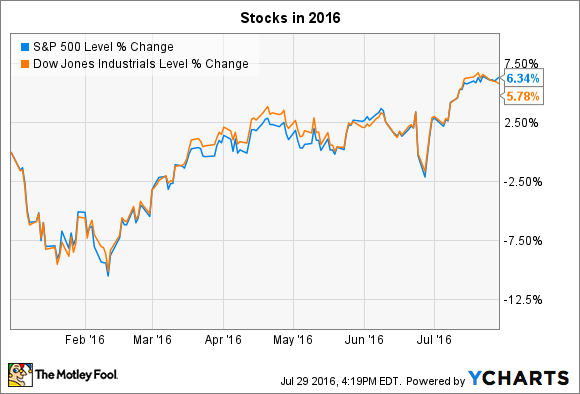 The economic highlight of the coming week will be on Friday, when the government releases monthly job-growth figures before the opening bell. Officials at the Federal Reserve have pointed to signs of a strengthening rebound, and if this week's report adds to that thesis, it will make it more likely that the central bank will raise interest rates at its next policy meeting in September.

In the meantime, the week ahead promises several powerhouse earnings reports, including from Procter & Gamble (PG -0.26%), Fitbit (FIT), and Tesla (TSLA 3.23%).

Consumer-goods titan Procter & Gamble (PG -0.26%) closes out what's expected to be a weak fiscal 2016 on Tuesday. Sales growth should weigh in at around 2% for the year, which implies further market-share losses against global rivals and competing value brands.

Investors will be dissecting P&G's organic growth rates to see if they show any signs of the turnaround that management has been seeking for almost two years. Solid volume gains will be especially important, because all of the recent growth has come from price hikes.

Things are looking better on the financial side, though, as aggressive cost-cutting is sending profitability higher and producing huge cash-flow gains. These improvements matter because they fund increasing cash returns to shareholders, even through weak sales environments like this. Yet sooner or later, P&G will need to demonstrate that its new portfolio and ramped-up focus on innovation will deliver higher sales growth.

Investors are downright pessimistic about Fitbit's results due out on Tuesday afternoon. The stock is down 54% this year as the wearable-device leader struggles with market-share losses caused by a wave of new competition in the industry. That tougher sales environment has convinced management to plow money into brand building and research and development, all with the goal of protecting -- and hopefully expanding -- its competitive position.

The resulting profitability dip is a secondary concern for investors, though. As Fitbit's Q1 results show, its success is closely tied to the popularity of just a few new products. The Fitbit Blaze and Alta devices together accounted for nearly half of all revenue last quarter.

If the company can deliver highly polished products that resonate with customers, then its stock could soar from the low valuation Wall Street has assigned to it. On the other hand, if competition keeps eating away at market share and sending profitability lower, then it won't matter much that Fitbit holds the top spot in one of tech's fastest-growing niches.

Electric-car maker Tesla posts earnings results after the market closes on Wednesday, Aug. 3. The stock hasn't moved much since its last quarterly check in. An aggressive new goal to produce as many as 500,000 vehicles per year beginning in 2018 dominated coverage in that report, and investors also cheered the positive early indications on demand for the upcoming Model 3.

This time around, shareholders are bracing for a possible downgrade to Tesla's 2016 delivery goal, given that the production ramp up hasn't been as fast as CEO Elon Musk and his team initially projected. Investors will be eager for updates on demand and production capacities for the Model X, and will likely hear more about why Musk is so keen on merging the auto operations with solar-specialist SolarCity.

Why Procter & Gamble Stock Is Worth the Risk