After seven straight quarters of declining profitability at Ensco (OTC:VAL), the company posted a big turnaround in earnings this second quarter. While there are some things to cheer about in the most recent earnings release, the net-income result isn't one of them. Let's take a quick look at the company's results, why its large earnings boost is a little deceiving, and what investors should be applauding.

Before you go jumping for joy over the solid earnings increase, know that there are several one-time benefits baked into those results that won't be there next quarter. One of those gains was a $240 million benefit for buying back $940 million worth of its debt at a 27% discount to face value. The company nets that gain on its income statement as a non-cash gain extinguishment of debt. Also, the company received a $205 million gain from early termination fees related to two of its rigs. If we strip out these two gains, net income would have been in a more modest range of $145 million for the quarter.

Here's how those results broke out by the company's business segments. 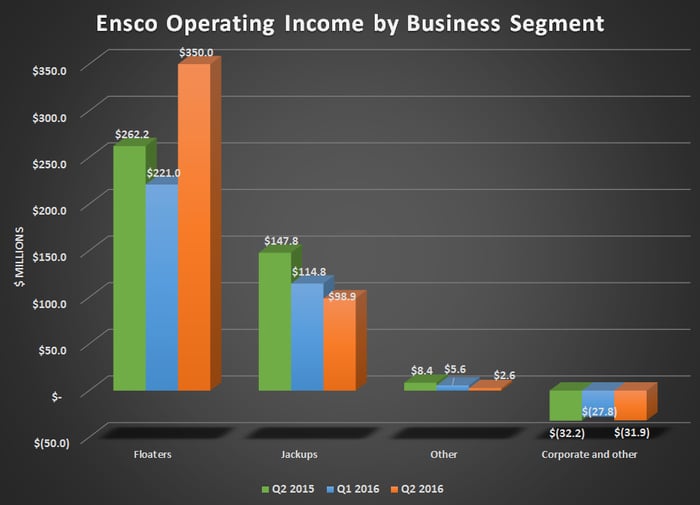 On the operations side of the business, not much happened. The company didn't sign any new contracts, but it did extend some contracts on existing rigs and terminated two contracts in the quarter -- one with Stone Energy and another with an undisclosed customer. The termination of these rigs and others coming off contract led to a decline in rig utilization from 76% in the second quarter of 2015 to 67% today. The backlog of contracted work stands at $4.1 billion. Ensco currently has two rigs held for sale that will go out of service.

The big news for Ensco in this quarter was on the financial side of the business. The first was that repurchase of $940 million in debt. In doing so, Ensco lowered its total debt outstanding to $4.9 billion. The company also improved its financial position by raising $586 million through a share issuance that raised cash on hand to $1.8 billion. That gives the company a net debt-to-capital ratio of 28% and no debt maturities due until 2019.

Issuing shares today when the market has been so sour on Ensco's stock isn't the most elegant solution to raise cash. However, it's probably going to take a while before offshore rig demand picks back up again. So better now to have plenty of cash to work through the rest of this downturn rather than wait until the company's financial situation deteriorates even more.

Ensco CEO Carl Trowell has emphasized a couple of things recently: keeping costs low and managing the rig fleet. With many older rigs on the books, Ensco has been scrapping rigs at a pretty rapid rate. Here's what he had to say:

Disciplined expense management also supported our financial results, with contract drilling and general and administrative expenses in line with our outlook. As we remain on track to achieve our targeted run-rate savings, we continue to pursue further efficiencies and cost savings across our operations and support structure. While some customers have elected to early terminate contracts, we have reached blend-and-extend agreements with others that added to our revenue backlog

We expect to take delivery of ENSCO 140 and ENSCO 141 later this year. Our high grading also included the scrapping of seven more rigs during the quarter, five floaters, and two jack-ups, bringing total rig sales to 28 since 2010, compared to 16 rig deliveries over the same period.

Following the rig sales completed during the second quarter, we now have a total of seven additional rigs that we plan to sell for scrap or permanently retire: two rigs in discontinued operations, plus ENSCO 56, ENSCO 81 and 82, ENSCO 86, and ENSCO 99.

As we've stated previously, rig scrapping will be an important factor in helping to rebalance the rig market. We believe rig scrapping industrywide will continue of the remainder of 2016 and into 2017.

This may not sound like a great long-term solution, but most of the rigs that are being scrapped are either at or past their economically serviceable life and aren't likely to be getting new contracts anytime soon. So rather than pay idling costs for these expired rigs, it's choosing to get rid of them. Ensco isn't alone in doing this, either. Other larger rig owners with older assets, such as Transocean, have been scrapping older rigs at a fast rate to prevent them from eating into earnings.

The other added benefit is that when the market does turn, there will be fewer available rigs to contract, which should help boost contract rates for the newer rigs that are left in service.

Ensco is making some hard decisions right now by scrapping older rigs and issuing stock to shore up the balance sheet, but they're prudent moves to prevent the company from getting into financial trouble down the road. This quarter's results are a little inflated, so don't look into them too much. If there is something worth cheering, it's that the company has a very manageable debt situation over the next several years with few capital obligations as it rides out the remainder of this tough market.