What: Shares of Horizon Pharma plc (NASDAQ:HZNP), a specialty biopharma company developing treatments for arthritis, pain, inflammatory, and orphan diseases, rose by more than 14% last month, according to data from S&P Global Market Intelligence. The drugmaker's stock was propelled higher in July by an upgrade from analysts at Morgan Stanley, who cited a number of upcoming potential tailwinds, such as the expected top-line readout for Actimmune's high-value Friedreich's ataxia indication by year's end, for their revised outlook. 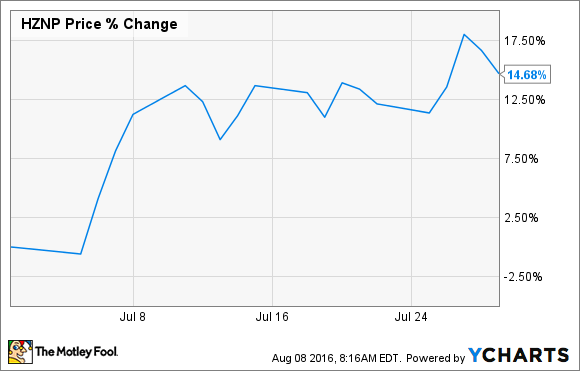 So what: Across the first half of 2016, Horizon's shares shed more than 20% of their value as a result of the ongoing drug pricing debate in the U.S., and of course, the Valeant Pharmaceuticals (NYSE:BHC) saga that weighed heavily on nearly every specialty pharma stock. As Valeant appears to be in the midst of finally pushing past its slew of internal struggles, and the political rhetoric surrounding drug prices has died down somewhat in recent months, Horizon's high growth prospects seem to have recaptured the imagination of investors lately.

Now what: In its second quarter-earnings release, for instance, Horizon reported a noteworthy 49% increase in net sales to $257.4 million for the three-month period compared to a year ago. That staggering growth rate gives the drugmaker a compelling forward P/E ratio of around 7.8 at current levels. So, while Horizon's stock may not be as cheap as, say, Valeant, with its forward P/E of less than 3, this specialty pharma does come with far fewer headwinds.

Most importantly, Horizon continues to pivot toward the sustainable orphan drug space, with sales of its rare disease medicines Actimmune, Buphenyl, and Ravicti jumping by 51% in the second quarter relative to a year ago. The net result is that orphan drugs made up a healthy 28.5% of the drugmaker's total net sales in the second quarter, and this number should continue to rise as Horizon's clinical pipeline marches forward.

All told, Horizon still appears to be a compelling buy, despite its double-digit rebound last month, and is exhibiting continued strength following a better-than-expected second-quarter earnings release.