Energy Transfer Partners LP (NYSE: ETP) recently reported second-quarter results, and the numbers were not pretty. The company's adjusted EBITDA (earnings before interest, taxes, depreciation and amortization) slumped 7.9% year over year to $1.37 billion, while its distributable cash flow sank even further, dropping 19.1% to $774 million. That said, while those numbers were a concern, three other numbers caught my eye as being the ones investors should watch going forward.

These two segments are under pressure

Driving the decline in adjusted EBITDA was weak performance across several of the company's operating segments: 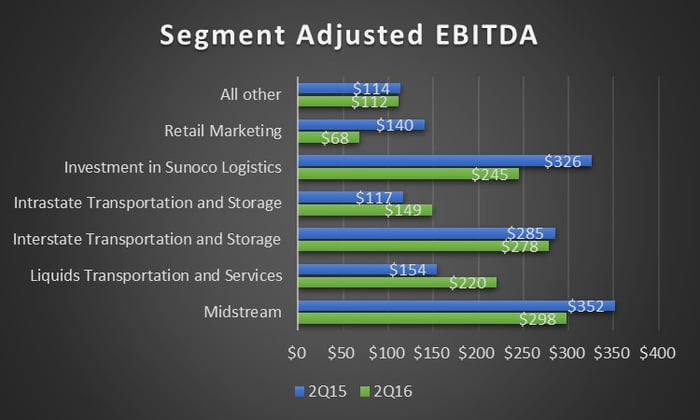 Overall, the bulk of the poor performance can be attributed to the results of three of its segments: the retail marketing and midstream segments, and the company's investment in Sunoco Logistics Partners LP (NYSE: SXL). That said, we can give the retail marketing segment a pass;  it was unconsolidated from results after Energy Transfer Partners transferred the general partner interest in its retail arm, Sunoco LP (NYSE:SUN), to its general partner Energy Transfer Equity LP (NYSE:ET). What is a concern, however, are the declines in earnings in the midstream segment and at Sunoco Logistics.

In the midstream segment, weak oil and gas prices continue to weigh on results. The company experienced a $63 million decrease in that segment's gross margin, because hedges it had in place last year have now rolled off. In addition, company margins on unhedged volumes were down another $10 million due to continued weakness in commodity prices. While the company was able to offset some of this pressure by placing new several assets into service, segment earnings still slumped a worrisome 15.3% year over year.

Earnings from the company's investment in Sunoco Logistics dropped by an even more worrisome 24.8% due to similar pressure from weak commodity prices. Earnings from the company's crude oil operations were down $49 million due to the company's crude oil acquisition and marketing activities, which included not only an accounting adjustment but also lower volumes. Meanwhile, earnings in the company's natural-gas liquids (NGL) operations were down $51 million due to its NGL acquisition and marketing activities, which fell as a result of a similar accounting adjustment and lower volumes.

This number is even worse than it looks

Those weak segment earnings put downward pressure on Energy Transfer Partners' distributable cash flow, which slumped to $774 million. That is a concern because the company distributed $850 million in cash to investors, leaving it with a $76 million shortfall and a disquieting coverage ratio of 0.91.

That said, the deficit would have been even greater if Energy Transfer Equity did not step up and provide its MLP with some additional support, agreeing to reduce incentive distribution rights by $720 million over the next seven quarters. As a result, Energy Transfer Equity's incentive distributions during the second quarter were reduced by $75 million, which when combined with prior reductions led it to forgo $110 million in cash this quarter. Without that support, the cash flow gap would have widened to $180 million and resulted in an even weaker coverage ratio.

Energy Transfer Equity is providing this support so that its MLP can continue to invest in major growth projects while maintaining its current distribution. The company believes that once these projects come online, not only will the current cash flow gap disappear, but the MLP will also be in a position to restart distribution growth.

The energy market downturn is having a noticeable impact on earnings at two of Energy Transfer Partners' segments, which is weighing on its cash flow. That is forcing the company's parent company to step in and to provide some support. While that is not an ideal situation, it does seem to be working, with the company believing it can continue to maintain its distribution throughout the downturn.