What: Shares of Chesapeake Energy (OTC:CHKA.Q) surged last month, despite the fact that oil slumped, and natural gas was rather flat: 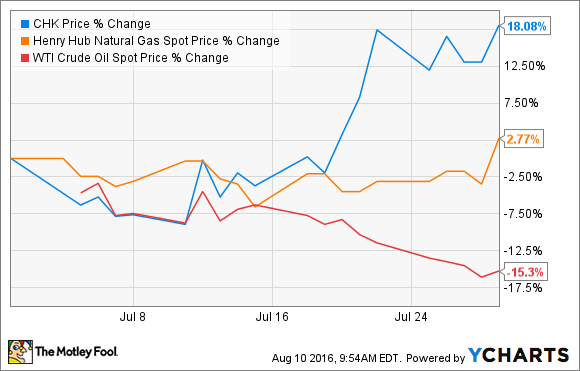 So what: Chesapeake Energy's stock got its initial jolt in mid-July after Piper Jaffray upgraded shares from underweight to neutral while setting a $4.50 price target. In doing so, Piper Jaffray cited a diminished default risk over the next two years thanks in part to the company completing $950 million in asset sales, negotiating a lenient credit agreement, and initiating several debt-for-equity exchanges. While the company still has a boatload of debt to address, Piper Jaffray believed that Chesapeake's recent actions boosted its near-term outlook.

That upgrade was followed by a similar one from Tudor Pickering, which upgraded the stock from hold to buy. Not that long after, Johnson Rice followed with an upgrade of its own, raising the stock from a hold to accumulate.

In addition to that, a report in Upstream Online at the end of the month said that the company was near a deal to sell out of its Barnett Shale position. According to that report, the company was finalizing a deal with a privately held buyer in a move that would enable Chesapeake to pay down more of its debt load. However, when Chesapeake reported its second-quarter results in early August it did not suggest that a sale of the Barnett was imminent. Though, on its quarterly conference call, CEO Robert Lawler did hint that the company would be open to selling that asset if the price was right. However, the company did explicitly say that it was in the process of selling some of its acreage in the Haynesville Shale. Further, that asset sale would enable the company to divest a total of $2 billion in assets this year, which would put it ahead of its $1.2 billion to $1.7 billion target range for asset sales.

Now what: Analysts love the steps Chesapeake Energy is taking to improve its balance sheet. Further, the company made it clear that additional progress is in the pipeline. That improving picture is giving investors growing confidence that the company will be able to make it through the downturn on its own.