Please ensure Javascript is enabled for purposes of website accessibility
Log In Help Join The Motley Fool
Free Article Join Over 1 Million Premium Members And Get More In-Depth Stock Guidance and Research
By Nicholas Rossolillo – Jun 29, 2020 at 10:13AM

With coronavirus wreaking havoc on the world and exposing all sorts of fragility in the economy, corporate budgeting is one area that has again made headlines -- especially given the number of large companies out there suddenly in need of a lifeline. I already picked on stock buybacks a few months ago, and how some irresponsible behavior has manifested itself this year. Not to add more fuel to the dumpster fire that has been 2020, but stadium naming rights are another precarious part of the economy that deserve investors' closer attention.

Hundreds of stadiums around the globe host professional sports teams. To generate revenue, many of these venues sell the right to name the stadium after a corporate sponsor. In exchange, the business gets its logo plastered all over the venue, gets at least a couple name drops during an event broadcast, media mentions, and the opportunity to pick up direct sales at events themselves (like Molson Coors (TAP 1.53%), which has its name attached to Coors Field in Denver, Colorado). 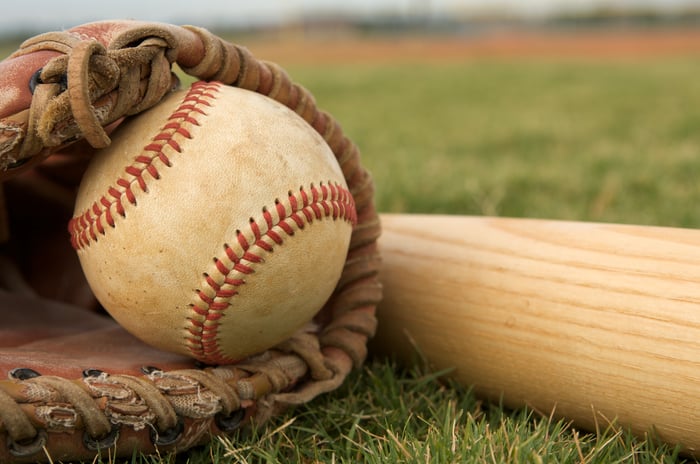 But such deals aren't always as lucrative as they sound. Per a study conducted by my firm Concinnus Financial a few years ago -- and updated using AI business research tool Noonum.ai for 2020 -- stadium naming rights might be a foreboding sign.

According to the data (which focuses primarily on North America), nine of the nearly 150 companies (or 6% of them) that purchased stadium naming rights in the last two decades declared bankruptcy during or shortly after their sports venue deal expired.

Bankruptcy happens, but that's a high percentage. In a bad year like 2009, nearly 61,000 businesses declared bankruptcy. That sounds like a big number, but there are some 30 million businesses in the U.S. Thus, even when the economy is down in the dumps, far less than 1% of businesses go bankrupt, and most of those are small outfits with just a few employees or less.

That's why it makes sense to pay attention to financial troubles at companies that place their names on stadiums. Chesapeake Energy (CHKA.Q)  has had its name attached to the home of the Oklahoma City Thunder since 2011, for a starting sum of $3 million a year, with a 3% per-year escalation afterward. (That would total about $3.9 million in 2020.) But long-running troubles at Chesapeake could soon be coming to a head with a bankruptcy filing.

Worse yet, some two-thirds of those stocks that have their logo attached to a stadium have underperformed their peers during the tenures of their sports arena deals.

Sports and business do mix -- if the recipe's right

So if a stock you own purchases the right to name a stadium, is it time to head for the exits? The answer isn't so cut and dry, for several reasons.

A large number of the companies that have historically purchased rights to stadium names, only to struggle or subsequently fail, were oil and energy, finance, and airline companies, as well as a handful of dot-com bubble casualties. Basically, there seems to be a connection between periods of specific industry bubbles and some companies therein spending haphazardly.

But for every bad story, there is an equally impressive successful outlier. Some notable mentions are Target (TGT 4.98%) (long-term deal with Target Center in Minneapolis, ), PepsiCo (PEP 1.60%) (Pepsi Center in Denver), and Qualcomm (QCOM -1.17%) (Qualcomm Stadium in San Diego, up until 2017).

One theme among the winners that stands out is a tilt toward consumer-facing brands. After all, what does a business-to-business-based revenue-generating outfit like Chesapeake Energy really have to gain by shelling out a few million a year on sports? Not that $3 million a year would have been the difference between success and the company's current failings, but it might be indicative of some poor long-term budgeting.

When a company shells out its cash for marketing efforts, it needs an obvious and measurable benefit in return -- a reason for dangling the name in front of consumers. Sometimes it's a hometown connection that could lead to more business. Sometimes it's the opportunity to test a new product or tech in the real world. In a few cases, the company may have a vested interest in the sports team or property itself.

In general, though, the data would suggest far too many big businesses blow good money on sports. While the kind of crisis that carries a price tag (like COVID-19) can't always be predicted, life's twists and turns happen. Being prepared for even extreme scenarios is just plain good business stewardship; vanity marketing, perhaps a little less so.

When a company pays to slap its name on a stadium, that's not an automatic reason to sell a stock. But it could be a sign for investors to start doing some digging to see what kind of return on investment a company is generating -- and whether positive returns are due to good management decision-making, or simply a rising economic tide that is floating all boats. All too often, the latter proves true.