Please ensure Javascript is enabled for purposes of website accessibility
Log In Help Join The Motley Fool
Free Article Join Over 1 Million Premium Members And Get More In-Depth Stock Guidance and Research
By Matthew DiLallo - Jun 19, 2020 at 6:33AM

Winning a stadium-naming deal is usually a bad omen for a company.

Companies pay big money to put their names in lights. One of the flashier ways they can do that is by securing naming rights for sports stadiums and arenas. Whenever fans attend a game or tune in on TV, they see the brand that paid big dollars to put its name on the facility.

Unfortunately, all that publicity hasn't paid off for most companies that secure the naming rights of a sports facility. Several have gone bankrupt, highlighted by Enron's collapse nearly two decades ago. That curse seems to have claimed another victim in Chesapeake Energy (CHKA.Q) -- the naming-rights holder on Chesapeake Energy Arena in Oklahoma City -- which is on the verge of filing for bankruptcy. 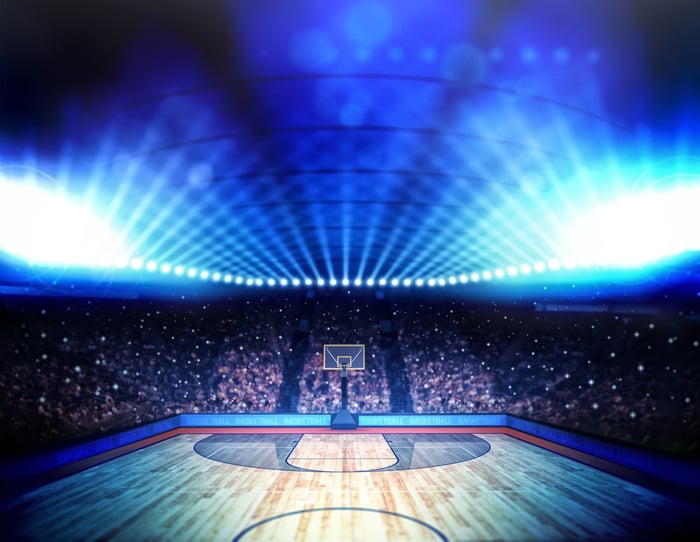 In 2000, high-flying Houston-based energy company Enron secured the naming rights to a new state-of-the-art baseball stadium for the hometown Astros. The company signed a 30-year, $100 million deal to put its name on the park, calling it Enron Field.

However, the company's subsequent collapse led it to broker a deal to get out of its stadium-naming rights contract, which it sold back to the Houston Astros for $2.1 million. The ball club eventually signed a similar 30-year, $100 million naming-rights contract with Coca-Cola (KO 0.82%) subsidiary Minute Maid. It renamed the stadium Minute Maid Park in 2002.

While Enron is one of the most well-known companies to go bust following a stadium-naming deal, it's far from the only one. CMGI, PSINet, Fruit of the Loom, 3 Com, Conseco, Adelphia, Transworld, and Sports Authority are among the many companies that went bust after signing a stadium-naming deal. One of the more notable failures of that group was CMGI Field, which never saw the light of day.

In 2000, the tech and venture capital company signed a 15-year, $114 million contract for the naming rights on the New England Patriots' new home stadium. However, by the time construction finished on that field in 2002, CMGI had gone bankrupt.

Gillette bought the naming rights out of bankruptcy. The razor-maker is one of the few success stories, as it ended up selling itself to consumer-products giant Procter & Gamble in 2005. Given the success of the sponsorship and franchise, Gillette has since extended its naming-rights deal until 2031.

Putting its name in lights

Despite the expansive graveyard of now-bankrupt companies that once had their names in the stadium spotlight, companies continue to pay big money for these deals. For some, it's about marketing exposure; for others, it's more about a sense of civic pride. That latter factor seems to have been the initial driver of Chesapeake Energy's arena-naming deal.

The company's co-founder and former CEO Aubrey McClendon had deep ties to Oklahoma City before his death in 2016. Born and raised in the city, he set it as the headquarters for the energy company he co-founded and led from 1998 until his ouster in 2012. He also owned several restaurants in the city and was highly involved in the community.

His ties to the area led him to become one of the original members of the Professional Basketball Club, which acquired the NBA's Seattle SuperSonics in 2006. The group subsequently moved the franchise to Oklahoma City and renamed it the Thunder. Chesapeake Energy would go on to win the naming rights for the team's home arena in 2011. The 12-year deal started with an annual rate of $3 million and has escalated by 3% per year.

Given the subsequent death of McClendon and Chesapeake's precarious financial position, it seems unlikely that the company will seek to retain the naming rights on the arena when the current contract runs out. Instead, the company might try to exit the existing agreement as part of a possible bankruptcy proceeding to save that annual expense.

Companies that put their names on sports stadiums have a poor track record of performance in the following years. While it's not always a precursor to an eventual bankruptcy filing, it's usually not money well spent. Because of that, investors should be wary when a company pumps a portion of its marketing dollars to put its name on a sports facility, since those investments usually don't pay dividends.