What: Shares of Hain Celestial Group Inc. (NASDAQ:HAIN) are down 28.5% at 11:40 a.m. EDT on Aug. 16, following a late-afternoon announcement from the company on Aug. 15 that it was delaying release of its fourth-quarter and fiscal 2016 financial results.

So what: Here's a snippet from Hain's release that more or less sums up what we know:

During the fourth quarter, the Company identified concessions that were granted to certain distributors in the United States. The Company is currently evaluating whether the revenue associated with those concessions was accounted for in the correct period and is also currently evaluating its internal control over financial reporting. The Audit Committee of the Company's Board of Directors is conducting an independent review of these matters and has retained independent counsel to assist in that review.

The release also stated that Hain "does not expect to achieve its previously announced guidance for fiscal year 2016." That's all we know at this point.

Now what: Needless to say, the market is freaking out. When a company starts talking about accounting issues, improperly recognizing revenue, and the board engaging independent counsel to assist in a review, markets get very antsy.

Some of today's selling is also potentially a reaction to recent speculation that Hain was set to be acquired a la WhiteWave Foods (NYSE:WWAV), which recently entered into an agreement to be purchased by Danone. Since WhiteWave announced that Danone was buying it for $56.25 per share in cash, shares of Hain have climbed as much as those of WhiteWave (at least before today's drop): 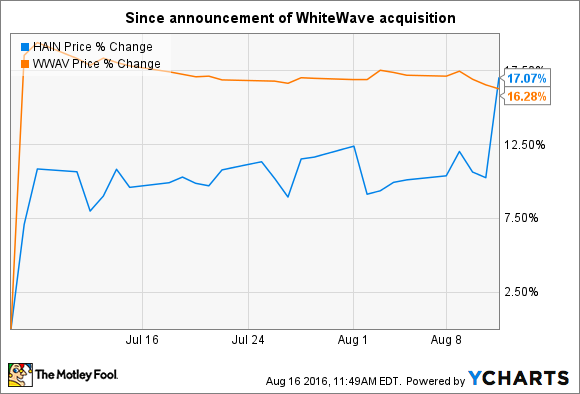 So what to do? My initial read is that this will likely seem a relatively minor issue when we look back in a few years, as the revenue recognition is described as a timing issue, not revenue that doesn't exist. After all, the statement from the company said that "any potential changes in the timing of the recognition of revenue with respect to these transactions should not impact the total amount of revenue ultimately recognized." We're talking about packaged foods, so this isn't the kind of product that would sit in a distributor's warehouse for years.

However, there's just not enough information to go on at this time, so most investors should probably do nothing until there's more information to act on. I really want to say this is a buying opportunity -- and time might very well prove that to be the case -- but the lack of knowledge of how deep this goes or how big a portion of Hain's distribution is affected creates a lot of risk in the short term.

If you're willing to take on the risk that this is a much bigger issue, keep in mind it could take a while for this to shake out, and the stock price could certainly go lower from here before any recovery happens -- and remember that a recovery would be predicated on this truly being a market overreaction. And while it's likely this is a market overreaction, that's by no means guaranteed. Caveat emptor.