Investors at varying ages face different demands on their time and money. If you are in your 40s, you probably still have kids at home (and all that comes with that), a home you're trying to pay off, and a long time to go before you can retire. It may be the perfect time to put some money into good companies going through tough times. Here are three stocks you might want to buy if you're in your 40s.

Emerson Electric (NYSE:EMR) has increased its dividend for 59 consecutive years, which is a pretty amazing achievement. The yield today is around 3.6%, well more than you could get from the broader market, and toward the high end of the company's historical yield range (though not the highest it has been).

The thing is, Emerson is an industrial conglomerate. The industrial sector tends to be cyclical, and right now, it's in something of a funk. Generally slow global growth in developed markets and slowing growth in emerging markets, notably China, have taken a big toll on Emerson. In fact, the company expects fiscal 2016 to be a tough year, with underlying sales down between 5% and 6%. That doesn't sound good, and it isn't.

But Emerson didn't get to 59 consecutive dividend increases by mistake; it's managed through tough periods before. And despite the headwinds, Emerson is still a profitable company, earning $1.84 a share through the first nine months of its fiscal year. Moreover, the industrial giant is working to shift its operations so it stays a top competitor. That includes cost-cutting, but also selling less desirable businesses. For example, it just agreed to sell its network power business for $4 billion. Jettisoning this relatively low-margin business should improve the company's overall profitability once the transaction is complete.

If you still have some time before you retire, Emerson is a name to look at now -- before it emerges from the industrial downturn.

The tap on effect

The next two companies both suffer from a similar ailment: Slowing global growth is hurting sales of heavy equipment. In the case of Caterpillar (NYSE:CAT), that means mining and construction equipment, while John Deere & Co. (NYSE:DE) is focused on farming and, to a lesser extent, mining equipment. These are two iconic brands that have such a powerful presence that they've become associated with the colors yellow and green, respectively.

But times are tough today. The slowing growth that's hit Emerson is also taking a bite out of Cat and Deere. For example, Caterpillar's top line fell 16% year over year in the second quarter, with the bottom line off nearly 30%, including restructuring charges. Deere, meanwhile, saw its top line drop 8% in the second stanza of the year, and its earnings were lower year over year by nearly 25%. Those are rough numbers, ones that paint an even bleaker picture than what's going on at Emerson.

Still, both of these heavy equipment companies remain profitable despite the deep downturns they're facing. Through the first six months of the year, Cat earned $1.40 a share with a full-year outlook of $2.75 ($3.55 if you exclude restructuring charges). Deere, meanwhile, earned $2.36 a share through the first half and expects to have net income of $1.2 billion this year, which industry watchers are suggesting means earnings of around $3.60 a share. Basically, despite the downturn, both companies are still making plenty of money. 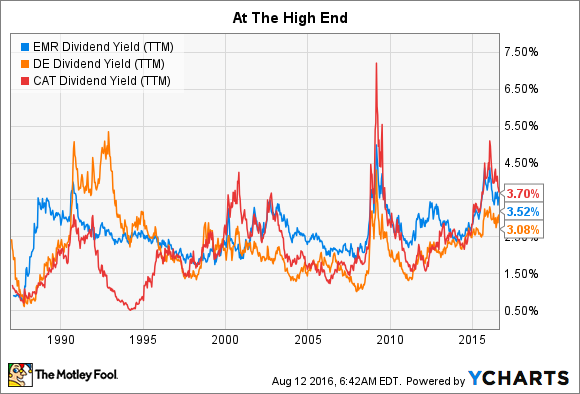 They each have a notable history of rewarding investors with dividend increases. Cat's dividend has increased for 22 years while Deere's streak is at 12. To be fair, both streaks are at risk of ending since a dividend increase hasn't taken place in a while at either company. But that's understandable given the difficult industry environment they're facing. That said, like Emerson, the yields offered up by Cat and Deere are at the high end of their historical ranges, at around 3.7% and 3%, respectively. So now could be a good time to buy them on the cheap if you have some time before you retire to reinvest those dividends -- a fact that remains true even if their dividends don't get increased during this downturn.

Time is still on your side

If you're in your 40s, you still have some time before you need to tap your savings. That means you can still take some risks, even though the responsibilities you face have likely increased. And that's why companies like Emerson, Deere, and Caterpillar could be great additions to your portfolio. They are out of favor today, but still highly profitable. And with long and successful histories behind each, there's every reason to believe they'll be able to turn their businesses around and reward investors down the line.

In Your 40s? 3 Stocks You Might Want to Buy @themotleyfool #stocks $CAT $EMR $DE Next Article
Current