Kinder Morgan's (NYSE:KMI) stock has been on a roller-coaster ride over the past year. After initially losing two-thirds of its value, the stock roared back and is up 50% since the start of this year. That said, it is still about a third lower than it was one year ago, which is a lot of volatility for what should be an otherwise stable company. The following five charts detail why the company started sinking, what pulled it out of its tailspin, and what to expect in the years ahead.

Kinder Morgan's stock started down a slippery slope last fall after the market grew concerned about its leverage amid the worsening oil market downturn. Those concerns hit their zenith in early December when credit rating agency Moody's lowered Kinder Morgan's credit outlook from stable to negative. Further, it warned that the company's debt was at risk of being downgraded, which would cause it to lose its coveted investment grade rating. Most concerning was the fact that Kinder Morgan's trailing twelve-month debt-to-EBITDA reached an unnerving 5.8 times in the third-quarter of 2015. Overall, that key leverage ratio had been on the rise in recent years, which is evident from the following chart: 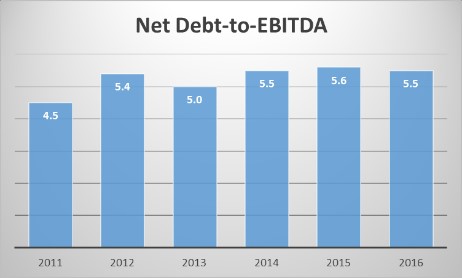 Because of the problems that leverage ratio caused last year, one of Kinder Morgan's top goals right now is to bring it back below 5.0 times. It has already made solid progress in that pursuit, with it recently signing several strategic transactions that are expected to bring it down to 5.3 by the end of this year.

Returns slipped over the past few years

Kinder Morgan's debt rose because it borrowed money to grow. Unfortunately, the economics of the assets it bought or built were not quite as good as those it brought into the fold in earlier years. As a result, the company's investment returns have fallen: 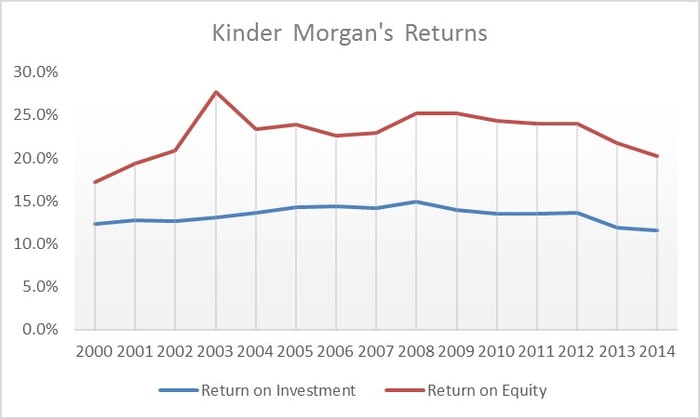 To combat this problem, the company is raising the bar on returns. This resulted in it going through its backlog and cutting expansion projects that no longer met its hurdle rate. To date, the company already canceled several projects including the $3.1 billion Northeast Direct and the $550 million Palmetto Pipeline due to lackluster economics.

Cash flow is stable through the storm

While the energy market downturn impacted Kinder Morgan's ability to borrow money, it has not impacted its cash flow to the same extent. As the chart below shows, its cash flow per share is expected to be just slightly lower than last year's result. 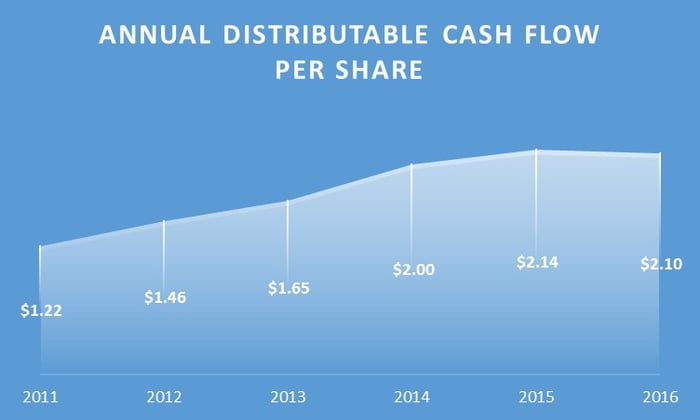 Driving that cash flow stability is the fact that just 97% of its underlying earnings have no direct exposure to commodity prices: 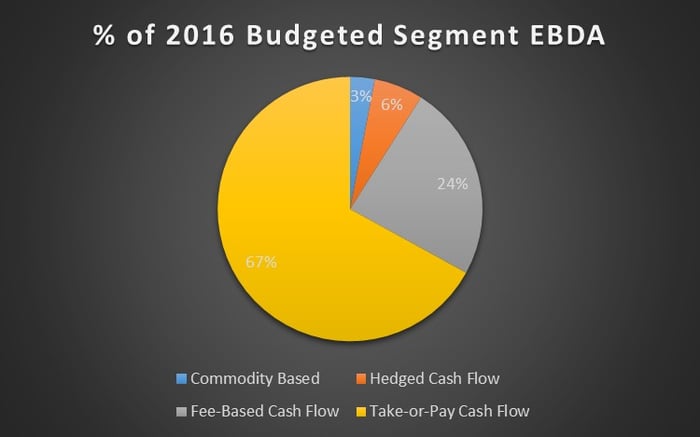 Moreover, 91% of its cash flow is fee-based or take-or-pay. That means Kinder Morgan gets paid irrespective of what commodity prices are doing and in many cases, it gets paid even if its customers are not even utilizing the capacity they had contracted. These agreements provide the company with very stable cash flow that has given it the flexibility to fund growth internally and pay down debt during the downturn.

While Kinder Morgan operates several different business segments, it is a natural gas pipeline company at its core given that 57% of its earnings come from that division. That is important because natural gas is projected to become an even more important energy source in the years ahead. According to energy analysts at research firm Woods Mackenzie, U.S. natural gas demand is expected to increase by 35% through 2025, with demand growth driven by several factors: 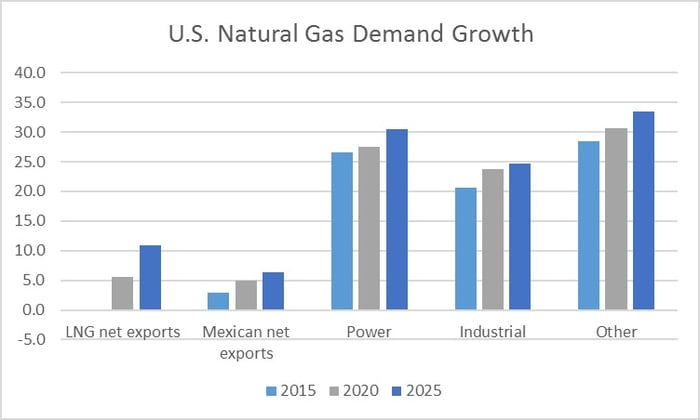 Rising demand for U.S. natural gas to both Mexico and the global LNG marketplace is particularly noteworthy, with Kinder Morgan signing several agreements to supply gas to these markets in recent years. For example, in 2014 it signed a 15-year agreement with Cheniere Energy (NYSEMKT:LNG) to transport and store gas for its Corpus Christi facility. It followed that up last year by signing another contract with Cheniere Energy, this time for 20 years. Combined, these two contracts represent a roughly $400 million investment for Kinder Morgan to build the pipelines needed to meet Cheniere's needs. Turning to the Mexican export market, the company signed a joint venture agreement to form a Mexican gas marketing company last year to bolster its ability to supply more gas to Mexico, which should open up the door for new pipeline expansion opportunities.

Given the size and scale of its network, Kinder Morgan remains well-positioned to capture a significant portion of the natural gas pipeline growth opportunities that should emerge in the years ahead. That will allow the company to continue growing its fee-based cash flows in a prudent manner, which would likely lead to higher dividends in the future.

While Kinder Morgan is not without its present challenges, the company is working toward improving its leverage and returns. Those improvements, when combined with its stable cash flow and ample growth opportunities, should fuel positive returns for investors for years to come.