Don't call it a comeback just yet, but Thursday marked the sixth straight day of gains for crude oil. Despite having fallen 57% in the last five years, Brent crude has now climbed nearly 30% year to date to settle near $50 per barrel. While the moves may be short-lived (Saudi Arabia could boost output this year) and we may not see prices top $100 per barrel for many more years (ever heard of shale?), there's no shortage of companies that could benefit from higher prices.

Two diesel stocks, in particular, should standout to investors. Here's why Renewable Energy Group (NASDAQ:REGI) and Darling Ingredients (NYSE:DAR) may be the best diesel stocks to play rising oil prices.

What makes these stocks worth watching?

Both Renewable Energy Group and Darling Ingredients have significant operations in renewable diesel and biodiesel. The former is chemically identical to petroleum-derived diesel, while the latter is usually limited to blending applications (although it can be used in 100% blends under certain conditions).

Darling Ingredients is better known for feed and food ingredients, but it captures outsized financial contributions from diesel-fuel products. While fuel products only represented 7% of the company's total sales through the first half of 2016, they represented 21% of the company's total EBITDA for the period. That's actually down from 24.5% in 2015.

The company's fuel segment, which only reports biodiesel performance, churned out an operating margin of 10.8% in the first half of this year -- surprisingly good given difficult market conditions. Financial contributions from sales of renewable diesel, manufactured by the Green Diamond Diesel joint venture between Darling Ingredients and Valero Energy, is reported separately. The joint venture generated $27.9 million in EBITDA for Darling Ingredients in the first half of 2016, or $0.39 per-gallon sold -- down from $0.56 per-gallon sold last year. 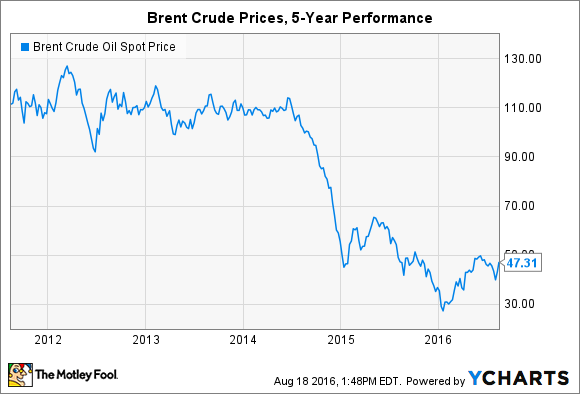 Despite current headwinds, both partners have committed to expanding the joint venture's annual output from 160 million gallons of renewable diesel to 275 million gallons, which should be completed in late 2017 or early 2018. That would generate an additional $45 million in EBITDA per year for Darling Ingredients -- and that's assuming crude-oil prices won't budge from current lows.

Renewable Energy Group is no slouch, either, boasting the title of the nation's largest biodiesel producer. The company sold over 250 million gallons of biodiesel and renewable diesel through the first half of 2016, which represents over 20% of the total domestic market. It expects to sell another 155 million to 175 million gallons of fuel products in the third quarter on its way to $30 million to $45 million in adjusted EBITDA.

Unlike Darling Ingredients, Renewable Energy Group remains completely dependent on fuel prices, but it has weathered headwinds remarkably well, reporting EPS of $0.20 for the first half of 2016. I know $0.20 may not seem impressive, but Renewable Energy Group has a track record of capital-efficient growth and continuous investments in low-cost manufacturing processes. For instance, in 2013 the company acquired a 30-million gallon per year facility in Mason City, Iowa for $16.1 million. In the following year total net income came in at $83 million, or about $0.32 of net income per gallon of production capacity. Put another way, Mason City alone generated nearly $10 million in net income in its first full year of operation. Later investments in process upgrades at the facility increased biodiesel quality while lowering production costs. Repeat this process across all 12 of the company's production facilities and you can see how its able to squeak out earnings when oil prices are below $50 per barrel.

In the more favorable days of 2013 and 2014, the company generated full-year EPS of $5.00 and $2.00, respectively. While crude oil prices may not top $100 per barrel anytime soon, the company could leverage greatly increased production capacity today to extract maximum benefit from higher crude-oil prices. 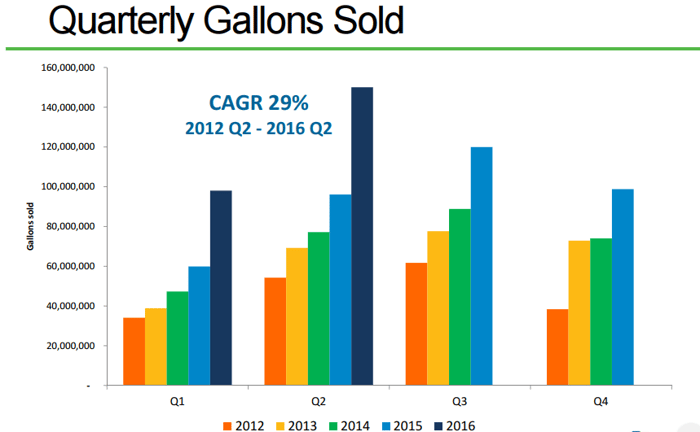 As investors can see, both Renewable Energy Group and Darling Ingredients are making due with factors outside of their control. Both continue to boast profitable diesel operations and make investments in the future. Yet the market may not be taking the long-term potential into account, as both companies have seen their stock prices and price-to-book values slide since the end of 2014. The former trades at just 70% of book value while the latter trades at just 120% of book value -- well below historical ratios.

If oil prices continue to rise, or find new support at or above $50 per barrel, then these may be the best diesel stocks to buy.