There are a lot of risks with railroad investing right now, but Canadian National remains a solid bet. Here are the top reasons, from three different perspectives.

Geographic strength is one of the things that CN does right. Image source: Canadian National Railway.

Given the decline in coal demand, the expected impact of the Panama Canal expansion on trans-American rail shipments, and a negative trend in auto sales, now may seem like the wrong time to invest in railroads. After all, the industry is heavily tied to all of these things. However, Canadian National Railway (CNI -1.29%) could very well be the exception, and you'd be making the right call to invest in it.

Jason Hall: Railroads are incredibly capital-intensive businesses, with very high fixed costs and vast infrastructures that must be maintained and upgraded. Furthermore, many of the industries they serve can be very cyclical in nature, leading to big shifts in shipping demand. This can have a major impact on profitability for railroads, which can have a hard time reducing expenses in lockstep with market demand. 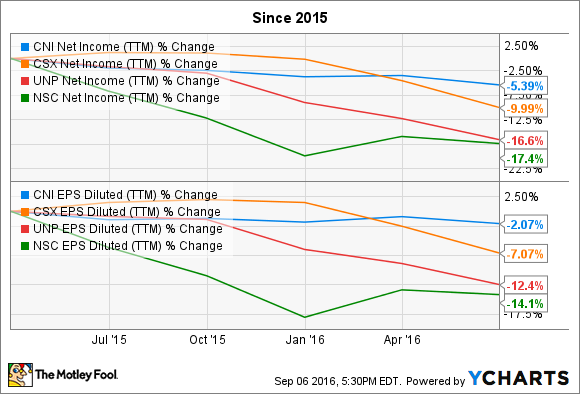 Canadian National, however, operates one of the most efficient railroads in North America, routinely spending less of its revenue on operations than any other Class 1 railroad. This isn't simply a matter of keeping costs as low as possible, but is also about keeping assets working and generating cash flows. The company may not be able to control demand flows within any single industry, but it can certainly focus on things it can control, including how quickly it moves cars though its yards and terminals, and how effectively it leverages every locomotive horsepower running at any given time, pulling as much cargo as possible.

And a big part of CN's ability to keep its assets working is detailed in the section below: a strong mix of geographic and industrial exposure.

Neha Chamaria: One of Canadian National's biggest competitive advantages is its geographic reach. CN is the largest railroad in Canada, with a rail network stretching over nearly 20,000 route-miles. Its closest competitor, Canadian Pacific Railway, operates an approximately 14,000-route-mile network, but CN's network extends beyond the Canadian border, and that's where it enjoys a leg up over its North American rivals.

CN is the only railroad in North America that spans three key coasts -- the Atlantic, Pacific, and Gulf of Mexico. In other words, the railroad extends across the continent, east-west and north-south: 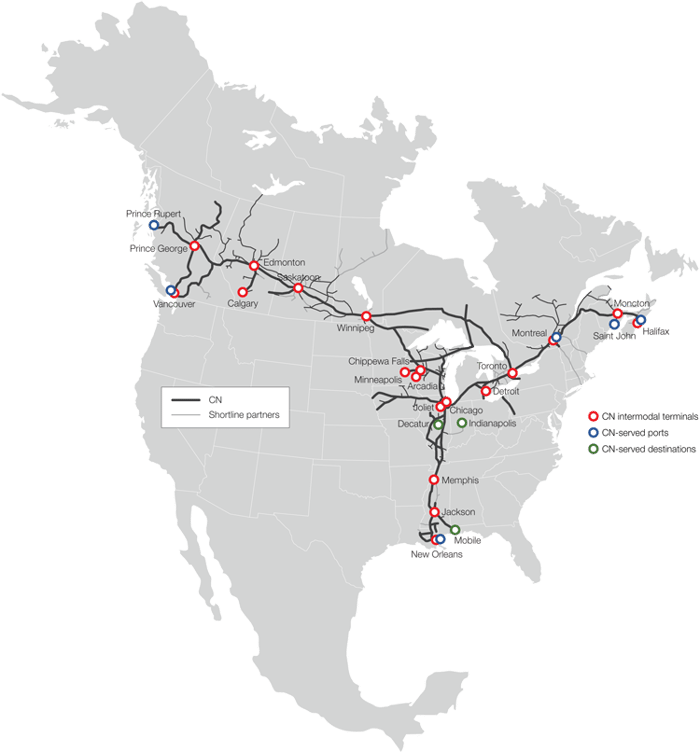 Thanks to this extensive network and its connectivity to all the other Class 1 railroads, CN links customers to Canada, Mexico, and the U.S., as well as to major ports along all three coasts. The acquisition of the EJ&E line around Chicago in 2009, in particular, proved a game changer for Canadian National: Today, 25% of its total freight traffic passes through Chicago.

Overall, Canadian National moves goods worth a whopping $250 billion every year. But aside from its geographic advantage, Canadian National's investments in ancillary services such as freight forwarding and warehousing, intermodal strength, and an interesting product mix have played a key role in supporting its revenue in recent years. 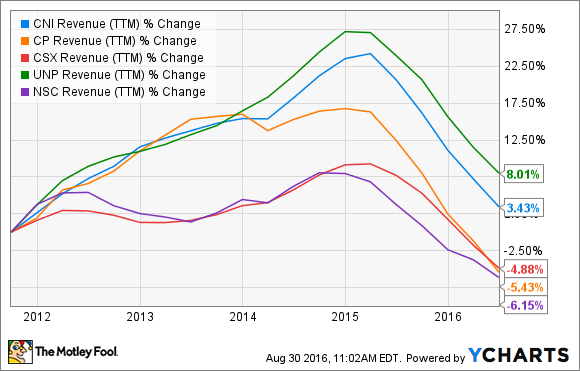 Canadian National is also less exposed to coal than many of its peers, having only derived about 3% of revenue from coal during the first half of the year compared to an industry average of 12%. At the same time, CN has the largest exposure to forest products among Class 1 railroads, at about 16%. So while limited exposure to coal has prevented its top line from eroding, high exposure to forest products positions the company well to benefit from the homebuilding recovery in the United States. This is poised to be one of CN's key growth catalysts in the near future, even as it exploits its extensive network to expand its business.

Putting all of its advantages to work for investors

Tyler Crowe: It's always great for a company to have large, almost insurmountable competitive advantages like Canadian National does. It's also good to see the company be an efficient operator that can generate lots of cash. For an investor, though, what ultimately matters is whether the company is using all of these elements to reward shareholders. That is the final test that Canadian National passes with flying colors, making it a stock investors should consider.

There are two things CN has done particularly well with all of that free cash flow to reward shareholders: growing its dividend and buying back stock. Over the past 10 years, the company's net repurchases of stock -- that is, stock repurchases minus stock issuance for options and stock-based compensation -- has totaled $12.9 billion and has reduced the company's share count by 27%. Buying back that much stock can really go unappreciated until you consider the impact it has had on earnings per share. If the company had not elected to buy back that much stock, the company's earnings for the most recent quarter would have been $0.77 per share, rather than the $1.10 the company actually posted.

Canadian National's dividend yield of 1.7% won't blow anyone away, but it makes up for the modest yield with a compounded annual growth rate of 17% over the past 20 years. For such a mature, capital-intensive industry like railroads, that is hard to beat. The combination of a robust share repurchase program and a modest but quickly growing dividend have generated returns that have absolutely crushed the broader market on a total return basis ever since Canadian National went public in 1995. 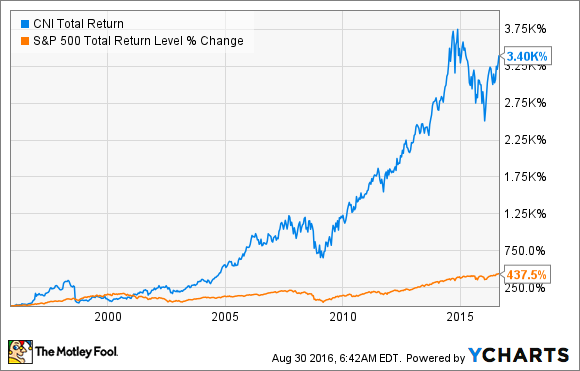 Having a great business model gives a company a leg up, but long-term returns are based on how management uses it to reward shareholders. Canadian National has shown it is working in shareholders' best interest, and is definitely worth considering as a potential investment.

After a Derailed Merger, Canadian National Gets Back on Track
351%